6 superb Soul titles to play on the drums

Share
Written By
Gwenn Daniel
About the author
Passionate about music from her childhood, Gwenn Daniel studied the piano at the conservatoire while also maintaining a steady stream of musical activities beyond this. This young piano teacher's constant lively curiosity encourages us to discover music from all eras and in all styles. She is now putting her literary and musical talents to the service of Tomplay and enjoys helping you discover the history of the great classics and guiding you through the vast choice of scores offered by Tomplay.
Date published
04/02/2021
Show/hide details

6 superb Soul titles to play on the drums

Discover or re-discover six Soul music hits and learn a little more about their history. We have included a link to the drums sheet music for each piece arranged in several levels of difficulty. Each arrangement contains two modes: one sheet music mode with the notes written and one improvisation mode. In both modes, you will have the possibility of playing the drums part accompanied by a professional recording of the rest of the group.

▶️ Play "Respect" by Aretha Franklin on the drums with backing tracks

Everyone knows the song "Respect" by Aretha Franklin, but we can bet its origin is less well-known to the wider public.

"Respect" was written and recorded by the American singer Otis Redding in 1965. The original text tells the story of a man who demands to be respected and considered by his partner. It is an appeal from a desperate man, who wants to give his wife everything she desires. It doesn't matter if she hurts him; all that counts is that he can have her respect when he brings money home - slightly macho, no?

In 1967, the record producer Jerry Wexler suggested this song should be covered by Aretha Franklin, a young and still unknown singer, inversing the genders of the characters involved and making this title a very avant-garde feminist hymn for the era!

This latter version is also associated with the protest movements against racial segregation in the United States, widening the claim for "Respect" to the whole of society.

Explore the Tomplay sheet music of "Respect" for the drums, arranged in several levels of difficulty. Take advantage of the many Tomplay features, such as the on-screen drums, and play accompanied by high-quality backing tracks.

Let's continue with the Jackson 5 hit "ABC" released in 1970, which everyone agrees is the little sister to "I Want You Back", the group's first hit.

It was Berry Gordy, the Motown founder, who asked for the next Jackson 5 hit to have the same family feel as "I Want You Back" - when you find a recipe that works, it can be tempting to hold on to it!

The major difference between these two titles is that the lyrics of "ABC" were written to be sung by a group of children, which was not the case with the previous hit, which tackled jealousy and getting someone back after a damaged love relationship.

The result of "ABC" is childlike, but incredibly efficient! Michael explains to his brothers that love is as easy as ABC; they respond with complex, precise voice interplay - delicious!

Incidentally, this song - which should have been called "1-2-3" - took the place of "Let It Be" by The Beatles at the top of the pop charts!

Explore the Tomplay sheet music for the drums of "ABC" arranged in several levels of difficulty. Take advantage of the Tomplay features such as annotating your sheet music and the on-screen drums and play accompanied by the multi-track backing tracks. 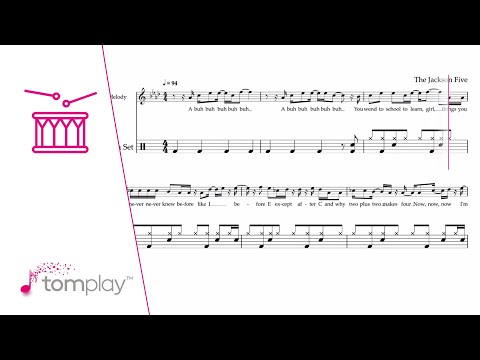 After having had a slight fall from grace during the middle of the 1970s, James Brown saw his career suddenly stop. Ironically, his music had never been so popular in discotheques and night clubs, where the disco sound of the 1970s could be heard, and also the more raw street sounds of the 1980s.

In terms of performances and renewal, however, the end of the 1970s was a calm period for the Godfather of Soul.

So it was that in 1985, the film Rocky IV was released and with it the piece which brought a new breath of life to James Brown's career: "Living In America". It's astonishing that a successful Hollywood film should restore the importance of a great artist looking for recognition!

Although very much in the James Brown style, one of the most unusual characteristics of "Living In America" is that he didn't write it himself. An extremely talented composer, most of the James Brown hits you can think of were written by him.

You undoubtedly remember Rocky IV, a boxing film on the theme of the United States versus the USSR, with Sylvester Stallone. The film has not aged very well, but at the time it captivated and got the crowds cheering.

Although it can't decently be classified in the list of the greatest cinema films, Rocky IV was one of the most profitable films of its time. "Living In America" reflects the joy of the people and paints a picture of the freedom Americans enjoyed at that time.

Explore the Tomplay sheet music for the drums of "Living in America" arranged in several levels of difficulty.  Take advantage of the Tomplay features such as annotating your sheet music and the on-screen drums and play accompanied by the multi-track backing tracks. 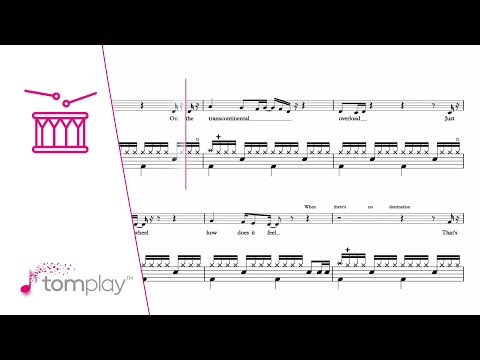 The originator of soul music, Ray Charles made a profound mark on American music, taking his inspiration from Jazz, Country and Rhythm and Blues.

Play the sheet music of “Hit the Road Jack” on the drums with Tomplay: by clicking on Play, the sheet music scrolls automatically on your screen so that you never have to turn the pages. 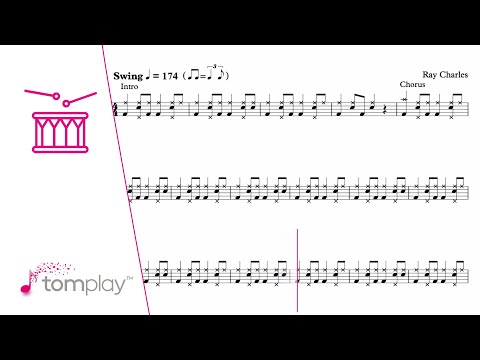 ▶️️ Play "Happy" by Pharrell Williams on the drums with backing tracks

The key to the song's catchiness lies in its repetition: the word “happy” is repeated 56 times and a large part is given over to the chorus which makes up more than half of the song.

Making a unique song without being unfashionable appeared an impossible task. However, this is the gamble Pharell Williams took in composing "Happy", which could easily have got lost in the flood of other successful songs such as "Blurred Lines" or "Get Lucky" which also mix R&B, Funk and Soul.

Explore the Tomplay sheet music of "Happy" for the drums arranged in several levels of difficulty, annotate your sheet music, play accompanied by the high-quality recording and change the tempo to suit you. 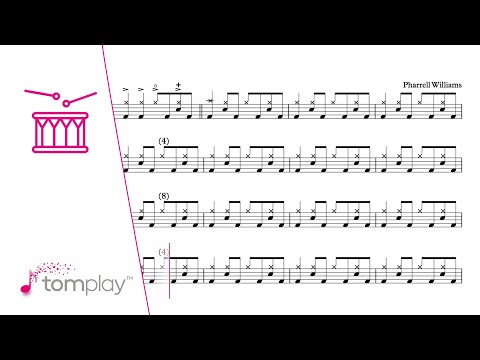 On 7 February 2016, the 50th Super Bowl took place at the Levi's Stadium in Santa Clara, California, an event followed by 100 million television viewers.

Performing during this event is the dream of many American artists, but very few are able to do it. That night, Coldplay and Beyoncé were among those who had the privilege of performing. However, when Bruno Mars went on stage, the audience went crazy!

Alongside Mark Ronson, he performed a variation of "Uptown Funk" a piece born from a jam session lasting several hours. In this context, this title received its definitive consecration as a "contemporary classic".

Explore the Tomplay sheet music for the drums of "Uptown Funk" arranged in several levels of difficulty. Take advantage of the many Tomplay features such as annotating your sheet music, changing the tempo, the on-screen drums and play accompanied by the high-quality multi-track backing tracks as if you were part of the group! 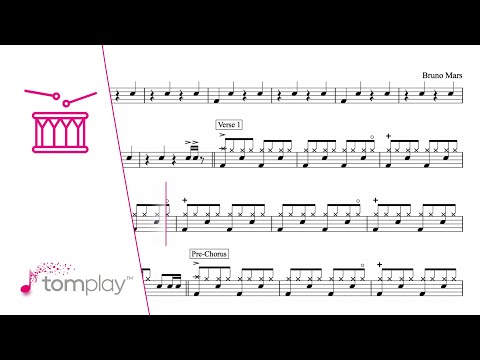 10 great Rock pieces to play on the drums