Share
Written By
Clara Avrillier
About the author
Clara Avrillier was introduced to music from a young age, firstly singing in choirs, then playing percussion in several orchestras before going on to study piano and classical music in Scotland. Following a master’s degree in linguistics, she now brings together her musical and language skills to accompany you on your journey with Tomplay.
Date published
5 days ago
Show/hide details

Ludovico Einaudi became famous thanks to his light and rhythmic music. Recognized as one of the best composers of our time, the work of this Italian pianist (born in Turin) has delighted a loyal and ever-growing audience for over twenty years.

He has risen to the top by creating many albums in a variety of styles from classical to electronic music, playing to sold-out venues in the world's most famous concert halls, and writing award-winning film music. His compositions are meditative and often introspective.

It was his mother who introduced him to the piano when he was young. His father, Giulio Einaudi, is the publisher and founder of the Einaudi publishing house, and his grandfather, Luigi Einaudi, was President of Italy from 1948 to 1955.

In 1982, Ludovico Einaudi graduated in composition from the Giuseppe Verdi Conservatory of Music in Milan. He then received a scholarship to the Tanglewood Festival in the United States and continued his musical studies with the composer Luciano Berio.

After spending several years composing the traditional way, in 1986 he began to search for a freer and more personal musical language. It was in the 1990s that his career took off with his first successful recording, Le Onde.

With regard to his music, he says: “In general I don’t like definitions, but ‘Minimalist’ is a term that means elegance and openness, so I would prefer to be called a Minimalist than something else”.

Einaudi’s music is renowned for its simplicity and this piece is no exception: there are four chords that form the basis of this composition, with variations appearing throughout the piece. Peaceful and relaxing are the words which come to mind when listening to Nuvole Bianche.

Released in 2004 as part of the album Una Mattina, this piece was originally written for solo piano but a piano and voice version was also created. When speaking about Nuvole Bianche, Einaudi said: “...there is a lightness, as if it is suspended. Lightness, not in the sense of a lack of depth, but this music somehow floats. It makes me think of the most authentic and sincere feelings.”

While the piece is written in F minor, the harmonies move between major and minor. Along with the layers of rhythmic texture, we can really imagine nuvole bianche (white clouds) moving across the sky.

This piece requires excellent coordination of the hands, as both feature consistent quavers. Given that many pianists often have a dominant hand, this is a great challenge to take on.

Ludovico Einaudi wrote Fly for his album Divenire, which was released in 2006. However, it was the French film The Intouchables that made this beautiful song famous, and it appears on the soundtrack alongside Vivaldi and Earth, Wind & Fire.

Fly is not the only Einaudi song on the film's soundtrack. It also includes Una Mattina, another one of his great successes which we will discuss later. The composer himself wrote part of the music for The Intouchables. The film's directors discovered him on the internet and liked the style of his compositions, which are similar to those of Michael Nyman and Thomas Newman.

The film tells the story of a quadriplegic aristocrat (played by François Cluzet), who hires a troubled young man (played by Omar Sy) to help him in his day-to-day life. To illustrate this touching and funny story, the directors needed a composer who could convey a variety of emotions through music, while keeping a certain distance.

Electronics gradually play a more important role in the ambiance of the piece, overlapping and intertwining with the piano in order to create tension. On closer inspection, Einaudi uses the same "tricks" here as he does in his amazing hit song Divenire, which is included later on in this article.

Play the piano sheet music for Fly with Tomplay, for solo piano, and enjoy the professional recording of the piece, synchronized with the sheet music - listen to simply for pleasure or for inspiration! 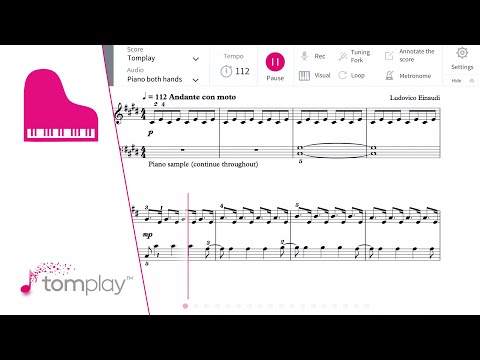 3. Elegy for the Arctic

▶️ Play Elegy for the Arctic by Ludovico Einaudi for solo piano

In June 2016, Ludovico Einaudi teamed up with Greenpeace to perform a concert in the Arctic Circle in order to support a campaign for a marine sanctuary in the international waters of the North Pole, and to raise awareness about melting glaciers and rising sea levels.

He first performed Elegy for the Arctic, a song composed especially for the occasion, on a floating platform in the Arctic Ocean in front of the Wahlenbergbreen glacier in Svalbard, an archipelago in Norway. "Playing there, it felt like I was playing for the gods," he said.

The composer's performance is accompanied by the sound of ice blocks breaking and falling into the water. This marked a magical yet solemn moment for the campaign, which was designed to protect one of the most endangered places on the planet (which we all depend on).

Play the piano sheet music for Elegy for the Arctic with Tomplay, available for solo piano. Take advantage of the professional recording of the piece, synchronized with the sheet music, to listen to simply for pleasure or for inspiration! 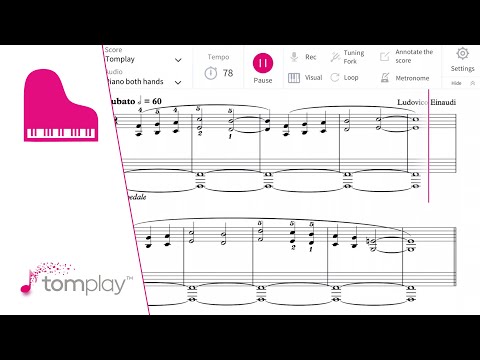 In 2006, Ludovico Einaudi released his most ambitious and best-selling album to date: Divenire. In it, the composer brought together many musical styles and enhanced them with the help of the Royal Liverpool Philharmonic Orchestra and a range of digital effects.

On the composer’s website, he said the following: "Divenire developed over a long period, beginning in 2002 when I was invited….to write a composition which I would be performing on a plateau at 2000 meters altitude (...): For that occasion I wrote a suite for piano, two harps and string orchestra, taking my inspiration from three paintings by the nineteenth-century Swiss artist Giovanni Segantini; La vita, La natura and La morte (Life, Nature and Death).

Performing with the orchestra in those spectacular surroundings was an extremely intense experience. I felt as if I were in a stream tumbling down a mountainside, not only immersed in it but an actual part of that unstoppable rush of water (...). Since that experience, I have done many other things, but have always thought that sooner or later I would develop the idea and expand it."

The album became a phenomenon upon its release, topping the classical music charts across Europe and taking the Italian pop charts by storm. Einaudi then embarked on his largest tour to date, with eighty concerts across Europe, finishing off with his unforgettable performance at the Royal Albert Hall in London.

Divenire, the main piece of this album, is one of his most beautiful compositions. It is a whirlwind piece of energy and emotion, which naturally rises and falls continuously. It captivates us without ever making us lose interest in the story that the notes tell.

Divenire opens with a simple melody in the right hand, supported by an orchestral ostinato in the left. Once again, Einaudi uses minimalism to create the driving energy of the piece. The chords develop into repeated but enriched motifs, until the dramatic and introspective ending.

Play the piano sheet music for Divenire with Tomplay, available for solo piano. Make the most of the separate hands feature to practice with one hand, accompanied by the high-quality recording of the other hand. 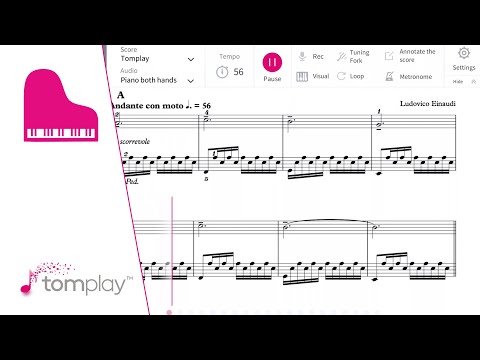 Una Mattina is another famous composition by Einaudi that can be heard in the film The Intouchables. It is part of the 2004 album of the same name, released prior to Divenire, and includes pieces for piano and cello.

The composer described the album as “...a collection of songs linked together by a story...my piano, which I have nicknamed Tagore, my children Jessica and Leo, the orange kilim carpet that brightens up the living room, the clouds sailing slowly across the sky, the sunlight coming through the window, the music I listen to, the books I read and those I don't read, my memories, my friends and the people I love.”

This piece is played in the last scene of the film, a marvelous accompaniment to an intense and moving moment. The composition begins with a consistent rhythm, which is very typical of Einaudi, followed by an expressive melody in the right hand.

Una Mattina is an excellent piece for practicing pedaling and learning to balance both hands.

Experience was released in 2013 on the album In a Time Lapse. Two days before its release, Einaudi performed some of the album's tracks, including Experience, live from his home in Milan for his YouTube channel.

The composition was originally written for the piano and a string orchestra, with the addition of a harp. Einaudi himself compared it to an Italian Baroque composition from the period of Vivaldi.

When examining the piece, we can see the build-up of power in the music: after a short introduction, the melody slowly develops in the right hand. Semi-quavers then appear in both hands, which contribute to the grandeur of the piece. After a short break, the energetic rhythm of the composition takes over.

Discover all other piano sheet music on Tomplay.com.

10 gentle, relaxing pieces to play on the piano