Compartir
Escrito por
Gwenn Daniel
Sobre el autor
Passionate about music from her childhood, Gwenn Daniel studied the piano at the conservatoire while also maintaining a steady stream of musical activities beyond this. This young piano teacher's constant lively curiosity encourages us to discover music from all eras and in all styles. She is now putting her literary and musical talents to the service of Tomplay and enjoys helping you discover the history of the great classics and guiding you through the vast choice of scores offered by Tomplay.
Fecha de publicación
27/04/2021
Mostrar/esconder detalles

Are you starting the piano? In this article, explore our selection of 10 famous short classical pieces for learning the piano. Each piece has been specially arranged by us for beginner pianists. You’ll find all the scores in the Tomplay app with their professional audio recording which you can use as a guide. Happy reading!

Play Pachelbel’s Canon on the piano, one of the most popular works in the history of music, still listened to around the world more than 330 years after its composition.

An unmissable composer from the Baroque period and a close friend of Bach, Pachelbel composed the Canon when he was only 24 years old. The piece’s success lies undoubtedly in its simplicity: the work is a series of variations in a canon, over a persistent bass line.

Use the many Tomplay functions to help you learn Pachelbel’s Canon in D major in the best possible way: adjust the tempo of the metronome to master the rhythm of the piece, annotate your score and work on the tricky passages in a loop.

Henrik Ibsen, a 19th century Norwegian playwright, wrote Peer Gynt in 1867. This allegorical drama in five acts tells the story of the fall and ultimate redemption of a peasant anti-hero in Norway. Contrary to the author’s previous dramas, it wasn’t intended for the stage.

Ibsen finally changed his mind and asked his friend Edvard Grieg to compose the music for it. After his Piano Concerto, the Peer Gynt Suite is the composer’s most popular work and the movements “Morning Mood” and “In the Hall of the Mountain King” feature among the most popular in this cycle of orchestral compositions.

Play this famous movement Morning Mood by Grieg on solo piano with Tomplay: by clicking on Play, the score scrolls automatically on your screen. 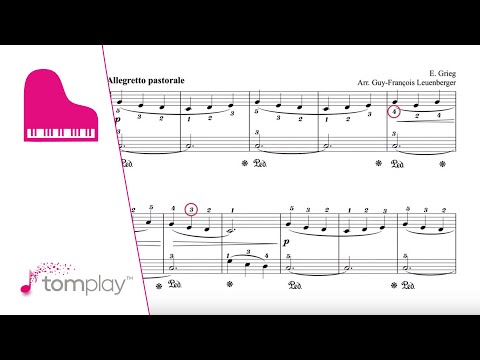 Is Schubert’s Ave Maria too popular? This is what some critics think, given the innumerable adaptations (more or less gratifying, it’s true) which the work has undergone since its creation in 1825.

The melody is exquisite, a very simple prayer addressed to the Virgin Mary by the Lady of the Lake, the heroine of a poem by Walter Scott, imploring her to protect her father, with whom she has escaped into a grotto.

In order to work on Schubert’s Ave Maria in the best way, annotate your score, work on the tricky passages in a loop and use the metronome to help you. 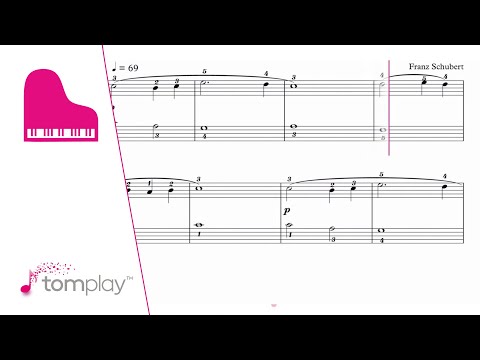 Through the night to you;

Down into the silent grove,

Beloved, come to me!”

This is the first verse of the Serenade which Franz Schubert put to music in the form of a Lied several months before his death, reprising the text by the German romantic poet Ludwig Rellstab.

Schubert’s Serenade is without doubt one of the most touching melodies in the history of music. With its call to love, it emits a tender atmosphere, but with a sense of imminent heartbreak.

Schubert died of syphilis aged 31 several months after having written the Serenade; perhaps without having known absolute love on earth, but certainly having conquered the hearts of all music lovers.

The separate hands function offered by Tomplay greatly facilitates the placing together of the hands in Schubert’s Serenade: you can practise one hand, accompanied by a professional recording of the other hand. 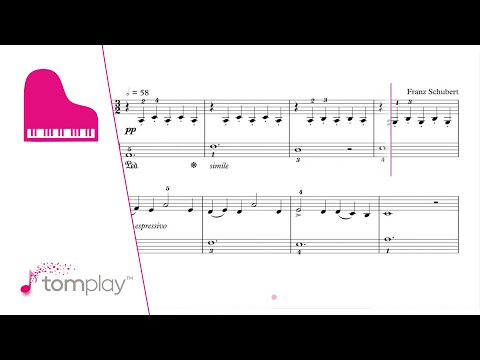 Throughout his Four Seasons, Vivaldi uses many effects and word paintings already widely employed in opera, being already a perfect master of its codes.

The slow, static movements, full of an often heavy atmosphere, are an excuse for moments of rest and sleep.

As for the tutti ritornellos of the quick movements, they paint the general decor and atmosphere, while the solo passages express the more precise details. The first movement joyfully announces the return of spring.

Get away from it all playing the Allegro movement from Vivaldi’s Four Seasons, Spring and listen to the professional recording of the piece included with the score to help you get the work into shape and playing it. 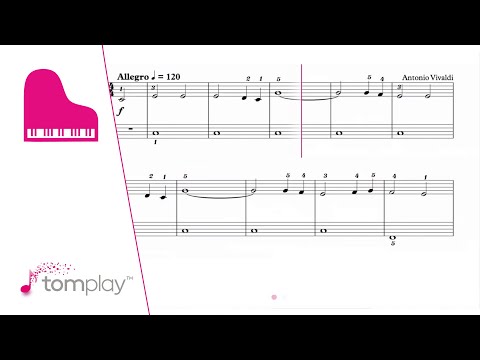 If you could only pick one Beethoven work, it would doubtless be this one: the ninth and last Symphony, with its choral fireworks inspired by Schiller’s Ode to Joy, words which had been going round in his head for more than thirty years.

Music to proclaim the victory of joy and fraternity over despair: what more beautiful theme for this inveterate defender of humanity?

Play Beethoven’s famous Ode to Joy for four hands with Tomplay: choose to play the Primo or Secondo part and practise alone at home, accompanied by the professional recording of the other part. 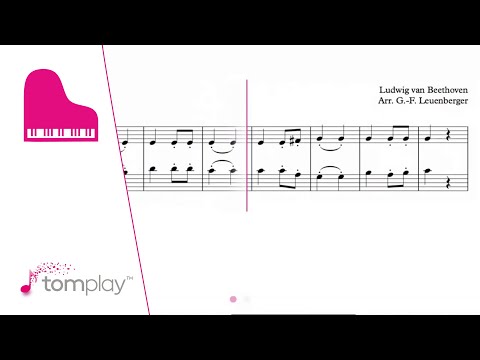 During the summer of 1883, while he was on holiday in the German Spa town of Wiesbaden, Johannes Brahms celebrated his 50th birthday by composing what would become one of his most well-known orchestral works, his Third Symphony.

He showed his score to Clara Schumann, who exclaimed: “Each heartbeat, each movement is a marvel!”

For the third movement, instead of the typical rapid scherzo found in 19th century symphonies, Brahms created a unique type of movement at a moderate, poco allegretto tempo. The finale is a lyrical, passionate movement rich in melody and intensively developed, altered and elaborated.

Use the Tomplay functions to support you in getting the third Poco allegretto movement of Brahms’ exquisite Symphony No. 3 into shape, at very easy level. 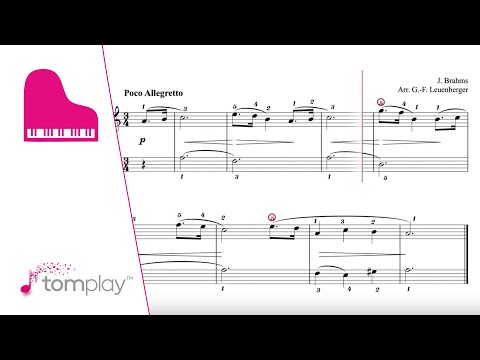 Inspired by the landscape paintings of the Italian artist Marco Ricci, Vivaldi composed the Four Seasons between 1720 and 1723 in a collection of twelve Concertos entitled "Il cimento dell’armonia et dell’inventione” (“The test of harmony and invention”).

Since its publication, musicologists consider the Four Seasons (Le quattro stagioni) to be one of the most audacious programmes written during the baroque period.

Use the many Tomplay functions to help you learn the Largo movement from Vivaldi’s Four Seasons, Winter in the best possible way: adjust the tempo of the metronome to master the rhythm of the piece, annotate your score, work on the tricky passages in a loop. 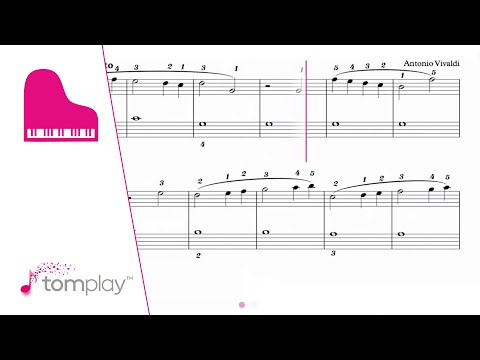 Even if the majority of Beethoven pages are hits, some are even more of a “hit” than others!

This is the case with the Allegretto from his seventh Symphony, with its literally irresistible forward motion - like a carpet in the form of a funeral march which is unrolled, used and covers everything in a strange sensuality.

Play the Allegretto movement from Beethoven’s Symphony No. 7 on solo piano with Tomplay: by clicking on Play, the score scrolls automatically on your screen so that you never have to turn the pages.

These Hungarian Dances would perhaps never have seen the light of day without the Hungarian violinist Eduard Reményi. Brahms met him when he was 15 and accompanied him on the piano on his concert tours, during which the violinist used to play gypsy dances.

So, he had the idea of composing his own Hungarian Dances.

Play the famous Hungarian Dance No. 5 by Brahms for four hands with Tomplay: choose to play the Primo or Secondo part and practise alone at home, accompanied by the professional recording of the other part. 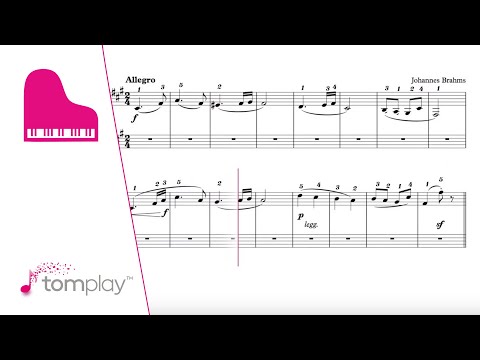 10 gentle, relaxing pieces to play on the piano