Compartir
Escrito por
Gwenn Daniel
Sobre el autor
Passionate about music from her childhood, Gwenn Daniel studied the piano at the conservatoire while also maintaining a steady stream of musical activities beyond this. This young piano teacher's constant lively curiosity encourages us to discover music from all eras and in all styles. She is now putting her literary and musical talents to the service of Tomplay and enjoys helping you discover the history of the great classics and guiding you through the vast choice of scores offered by Tomplay.
Fecha de publicación
17/02/2021
Mostrar/esconder detalles

Violinists, to your violins! Re-discover eight cinematic masterpieces, as well as the soundtracks which contributed to their success, and immerse yourself in the story of their composition. For each piece, we have included a link to the Tomplay sheet music. Available in several levels of difficulty, these scores contain "Play Along" audio recordings of the orchestra to accompany you!

1. Pirates of the Caribbean - Hans Zimmer

▶️  Play the theme from Pirates of the Caribbean on the violin

Hans Zimmer's name is one of the first to come to mind when thinking about film music. With nearly one hundred and fifty productions to his name over more than thirty years, this German composer is a master in this field.

Zimmer and his team composed the music for the first part of the Pirates of the Caribbean saga alongside Klaus Badelt. However, it was Alan Silvestri who had first been considered for this role.

Badelt had very little time to write the music, just a few weeks, and Zimmer's team had to call on no less than eight composers and nine orchestrators to write the additional music for the film, ie nearly half of it.

Use the Tomplay features to help you learn the music of the "Pirates of the Caribbean" theme in the best way: adjust the tempo of the metronome to fit your violin part over the professional orchestral backing track and work on tricky passages in a loop.

▶️  Play the theme from Game of Thrones on the violin

It is already nine years since the first episode of Game of Thrones was released, an American series adapted from the novels by George R. R. Martin (A Song of Ice and Fire).

This fantasy medieval saga is famous for its realism and for its many sources of inspiration taken from real events, locations and historical characters. It has been immensely successful worldwide.

Throughout the eight seasons, several million viewers have followed the adventures of the Starks, the Lannisters and other enchanted creatures. Many derivative products have seen the light of day, including video games, board games and role games based on the world of the hit series.

The music was composed by Ramin Djawadi (who had also worked within the Zimmer's team of composers on the music for Pirates of the Caribbean) who, given the success of the series and its signature tune, organised the Game of Thrones Live Concert Experience, a worldwide concert tour based on the music from the series.

The broadcasting of the series is now finished. To make the pleasure last a little longer, we're inviting you to play our sheet music of the epic Game of Thrones theme on the violin with an orchestral accompaniment, using the Tomplay functions to help you: annotate your sheet music and print it with your annotations. 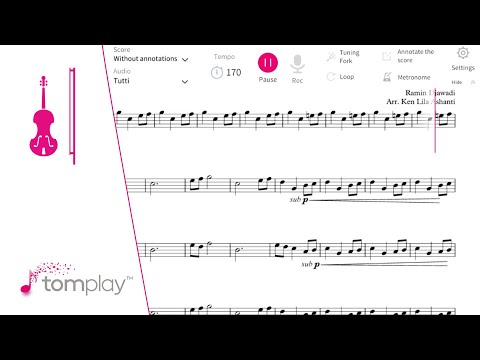 The film music composer James Horner (who has several successful Hollywood films to his name) needs no further introduction and was particularly well known for regularly using instruments of Celtic origin in his compositions.

His career took off with the music for the James Cameron film Aliens, but his score for Titanic (by the same director) remains the most widely-sold film score in the world. It won him many awards, just like the music for Braveheart.

Originally, Cameron didn’t want a song to accompany the credits at the end of his film, but he hadn’t reckoned on Horner, who secretly composed the melody and gave it to Will Jenning to write the lyrics.  And so “My Heart Will Go On” was born.

Céline Dion, who was felt to be the candidate capable of changing the director’s mind, wasn’t sure about it when she first heard the song and her husband, René Angelil, had to convince her to record a demo.

The singer admits that she was unwell on the day of the recording: she drank some black coffee, which had the effect of accelerating her vibrato (not her original aim!). After having got to know the story of the film, she went into the recording booth. Just one take was enough and the director was won over.

Another legendary film score in the History of cinema. More than 15 million copies of “My Heart Will Go On” have been sold. It was the highest-selling record in 1998 and propelled Céline Dion into the pantheon of the most widely-heard voices in the world. Explore our sheet music of "My Heart Will Go On" for the violin with an orchestral accompaniment. 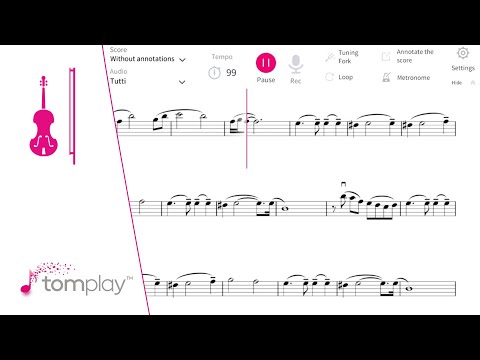 The Spanish series La Casa de Papel appeared on our screens at the end of 2017. It plunges us into a scenario in which we witness a heist organised by the mysterious “Professor” in the Royal Mint of Spain in Madrid. To execute his plan, the latter recruits eight gangsters who have nothing left to lose.

First shown in Spain, Netflix bought the rights to the series to distribute it on its platform. This was an effective decision, as La Casa de Papel has been internationally successful.

An internationally-known piece of music is now closely linked with this series, which now has a cult following. “Bella Ciao”, a famous Italian partisan song born in the 20th century in anti-fascist communities during the Second World War, has over time become the resistance hymn of militants and protesters all over the world.

The story goes that, in Italy during the 1930s, a grandmother taught her granddaughter this song. She often sang it with the other “mondina” in the rice fields where the work was difficult and long. Later on, the young girl became a member of the resistance during the Second World War and, in 1944, the lyrics of the song became those that we know today: revolutionary words, symbolic of the struggle against oppression.

Still covered today by modern artists, you can often hear the melody of “Bella Ciao” being hummed by younger generations. Explore our sheet music of "Bella Ciao" for the violin with an orchestral accompaniment synchronised with the score. 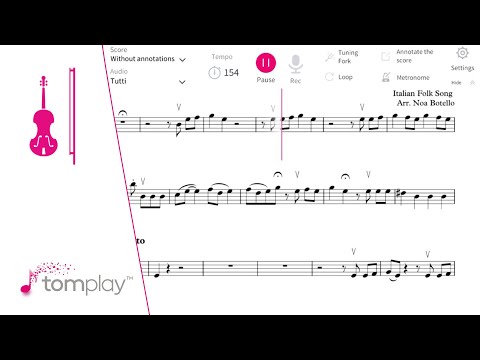 ▶️  Play the theme from Schindler's List on the violin

Regarding the composer John Williams, Steven Spielberg said “Whenever I write a picture and John writes the score, it turns out we always see the same film. We have the same emotional image.”

For the release for the film Schindler’s List in 1993, directed by his friend Steven Spielberg, John Williams wrote one of his most beautiful pieces. Having seen the film for the first time after his work, John Williams said this to Spielberg: "This is truly a great film! You need a better composer than me." Spielberg responded: "I know! But they're all dead!"

It was therefore a real challenge, as it was necessary to balance emotion and simplicity, without creating an excess of either, in order to musically illustrate the film's tragic story where the action takes place during the Second World War.

John Williams therefore composed a theme in a classical style, which he then gave to violinist Itzhak Perlman to play. This piece won him the Oscar for best film music.

Explore our sheet music of the exquisite theme from Schindler's List for the violin with an orchestral accompaniment synchronised with the score: start the accompaniment, which will make your sheet music scroll, and modify the tempo to suit you thanks to the Tomplay technology. 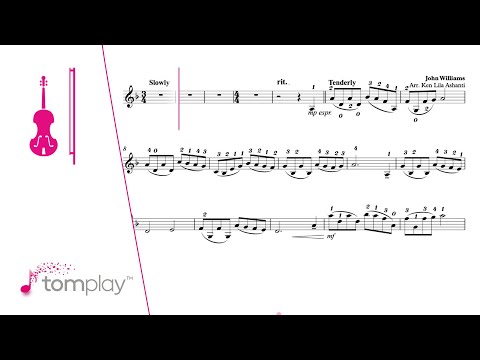 ▶️  Play the Love Story theme on the violin

Francis Lai was a kind, timid and discreet person and the widest-selling French film score composer in the world. In 1971, he received the Oscar for the best film music for the exquisite original score for the film Love Story.

The film portrays a young couple in love, though they come from different social classes and are subject to the trials of life. On the back of the film's success, the melody of the film score remains quite timeless.

However, Francis Lai had first of all refused to compose the music for it, owing to his fear of flying, as he had to travel to the United States to see the film. The production team then asked another composer to work on the film score, but they weren't totally satisfied and came back to Francis Lai, who said, on seeing the film, that he would have really regretted not doing it!

The composer Francis Lai, favourite composer of Claude Lelouch, died in 2018 at the age of 86. He leaves behind him some eternal melodies linked with great films. He loved Miles Davis and Charly Parker as much as Muse and Coldplay, Rachmaninoff, Debussy and Ravel.

Explore the violin sheet music of the Love Story theme in several levels, play accompanied by the high-quality recordings and take advantage of the many other features offered by Tomplay so you can learn this piece in the best possible way. 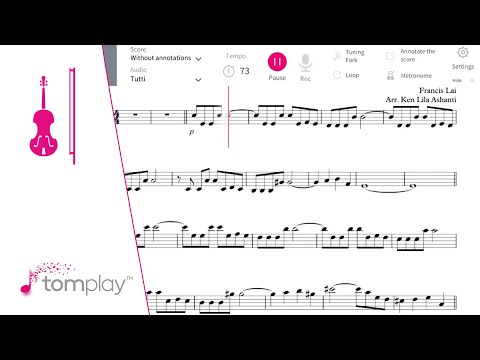 ▶️  Play the Godfather theme on the violin

The Godfather, a cult film of its time, recounts the adventures of a large Italian mafia family, whose main members are brought to life by Marlon Brando and Al Pacino and led by the director Francis Ford Coppola, who saw his film win three Oscars.

The music of The Godfather, composed by Nino Rota, is as famous as the film itself. Although in contention for the award, it was disqualified from the competition. It was felt that it had reprised the theme of another film, Fortunella, by Eduardo de Filippo. However, the composer of this original film score was none other than... Nino Rota!

It is true that the two pieces of music share the same melody, but with a slower rhythm and a comic temperament in the case of Fortunella. However, this practice was already quite widespread among composers of yesteryear. For example, Bach re-worked a large number of his existing compositions in order to refine them or create new ones.

Although the film was released almost 50 years ago, the original film score of this legendary film is one of the most-played film scores by amateur musicians. Explore our sheet music of the Godfather theme for the violin with an orchestral accompaniment. 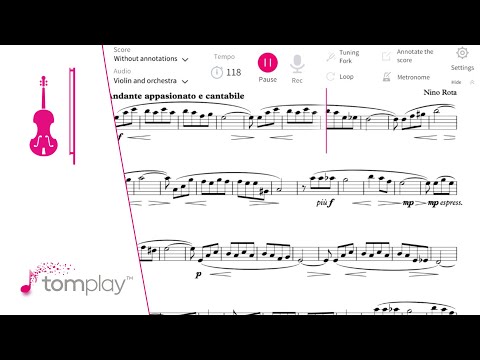 ▶️  Play the Andante con moto from the Piano Trio No. 2 on the violin

Stanley Kubrick died two decades ago, at the age of 70. A famous film director, whose works included notably the masterpieces A Clockwork Orange, The Shining, Eyes Wide Shut and Barry Lyndon.

Barry Lyndon, which won four awards, tells the story of the rise of a bold, penniless young Irish lad through the English high society of the 18th century.

Kubrick chose music from the same period for this film. As well as the sublime Sarabande by Handel, he admitted to having cheated a little by using Schubert's Trio for Piano and Strings No. 2 dating from 1827, finding a lack of passion or tragedy in the music of the 18th century!

Dive into the world of Barry Lyndon by performing the violin sheet music from Schubert's Trio for Piano and Strings No. 2 accompanied by a professional recording of the rest of the trio (cello and piano) synchronised with it. 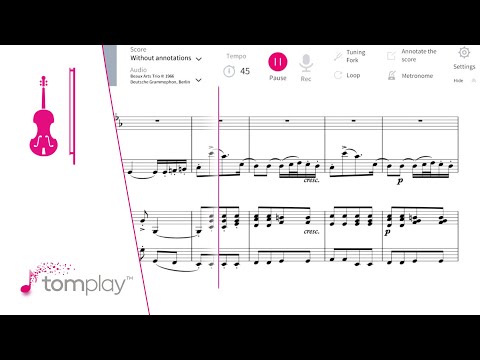