Share
Written By
Marcel Alber
About the author
As a passionate guitarist and former metal singer, Marcel Alber has been fascinated by music of every genre from an early age. Since then he has had a strong network in the music scene in Frankfurt am Main and is constantly looking for talents to inspire him. In addition to music, it is literature that he deals with in depth professionally. In order to give you the best Tomplay experience, he combines both talents and helps you to discover the best scores in our catalog.
Date published
19/11/2021
Show/hide details

When we’re feeling overwhelmed, playing music is a great way to comfort ourselves. In this blog post, we present the 10 most beautiful sad songs to play on the piano (including sheet music). Our arrangements are available in several levels of difficulty, so regardless if you are a beginner or an experienced pianist (and everything in between!), you can play these sad songs on the piano. You can also find all of these pieces in the following collections:

▶️ The most beautiful sad songs to play on the piano, Vol. 1

▶️ The most beautiful sad songs to play on the piano, Vol. 2

1. Yiruma - River Flows in You

▶️ River Flows in You sheet music to play on the piano

“River Flows in You” (2001) by pianist Yiruma has been described as the “Clair de lune” of the 21st century by Classic FM - a really outstanding compliment! The piece starts slowly, almost hesitantly, before opening into a much more flowing piece like a river. While it sets up, it retains its smooth quality thanks to the use of a higher octave melody and arpeggio runs. Perhaps one of the reasons it is such a calming piece is that the opening theme keeps recurring. It's comforting to the ear as we can recognize the same melody every time it comes back. The structure of the piece is more like a pop song as it contains a “refrain”, the opening theme, and “verses”, the other parts of the piece. It is a very clear example of Yiruma's neoclassical style.

This sad piano song is the perfect way to express your feelings using your instrument. Discover our wonderful arrangements of “River Flows In You”: They are available in different levels of difficulty for solo piano.

▶️ Imagine sheet music to play on the piano

“Imagine” is without a doubt one of the most famous songs in the world. Released in 1971, it's more than just a lovely song on the piano: it's a political message, a hymn to peace. It was only moderately successful when it was released, and it was only as a result of the 1980 assassination of John Lennon that the song began to make sense to and leave an impression on people. Today it can be heard on many occasions and events, more or less sad, but all with one common theme: peace. "Imagine" is a message of eternal hope.

John Lennon was a master at writing music - this song is no exception. You can find “Imagine” in the Tomplay Shop, arranged for the piano in several levels of difficulty e and with orchestral accompaniment. 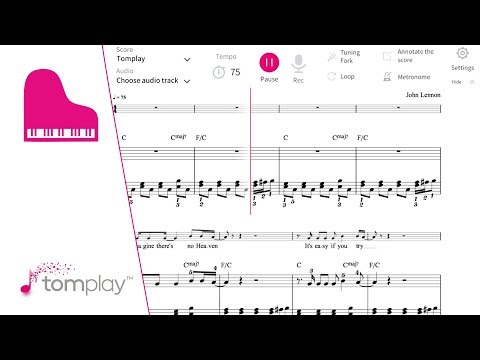 ▶️ Schindler's List sheet music to play on the piano

Steven Spielberg once said of the composer John Williams: “Whenever I produce a film and John writes the music, we always have the same images in mind. We have the same emotional vision. ” For the 1993 film Schindler's List, directed by his friend Steven Spielberg, John Williams wrote one of his most beautiful works. After seeing the film for the first time after his work was done, Williams said to Spielberg: "This is really a great film! You need a better composer than me." Spielberg replied: "I know! But they're all dead!"

It was a difficult challenge, as it was necessary to balance emotion and simplicity in order to musically illustrate the film's tragic story. John Williams, therefore, composed a theme in a classical style, which he then gave the violinist Itzhak Perlman to play. This piece earned him the Oscar for best film music.

The film tells one of the most important stories of our time and the music composed by John Williams highlights this. Discover the sad piano song of Schindler's List in multiple levels of difficulty: everyone can give it a try and play accompanied by an orchestra! 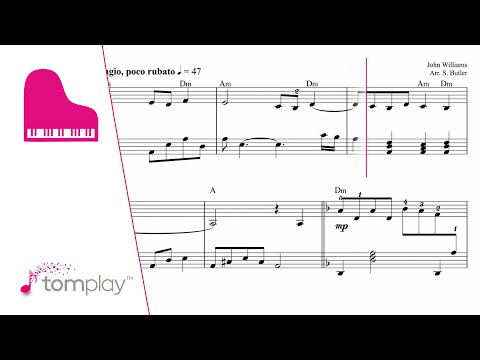 ▶️ Bella’s Lullaby sheet music to play on the piano

Hardly any other film series has left such a cultural influence as the Twilight saga. It all started in 2007 when the first part hit theatres. Based on an equally successful young adult book series, the success of the franchise was inevitable - shortly after publication, however, it was clear that expectations had been exceeded. Twilight tells the romance of teenage Bella and Edward, a vampire, and their undying love for each other - literally! With such an emotional story behind it, it takes equally intense music that expresses all of those strong feelings. Bella's Lullaby is one of many pieces on the soundtrack that brings the love between the two characters to life.

Twilight was a downright phenomenon that used many matching sad piano songs to illustrate the characters' love. Play our arrangements of “Bella's Lullaby” on the piano in medium difficulty and with orchestral accompaniment. 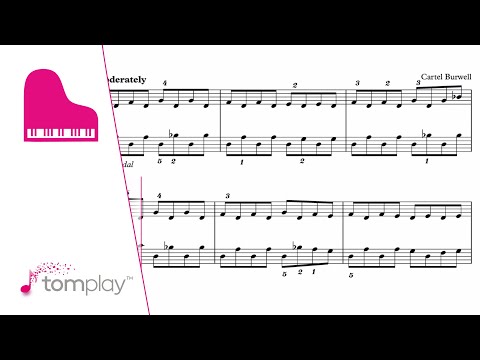 Next up is another piece of film music: The Hearts Asks Pleasure First from the film The Piano - a must for every pianist! The film is about a mute Ada and her daughter Flora, who have to leave their native Scotland to find a new life in New Zealand. There Ada expects an arranged marriage with Stewart - the only reminder left of her past is her beloved piano, which she brought with her from her home country. Since the instrument is very much in the focus of the story, the film music is also an outstanding experience for every pianist.

The film lives up to its name by playing a wide range of sad piano songs. Play our arrangements of “The Heart Asks Pleasure First” from the film The Piano in medium difficulty for solo piano. 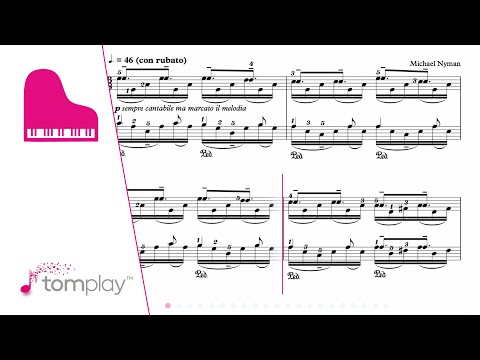 ▶️ Hallelujah sheet music to play on the piano

Leonard Cohen's Hallelujah had little success shortly after its publication. Only after the piece reached a larger audience through numerous cover versions and constant use in film and television did it gain the importance it has in the music world today. The song has gone through some changes in its long-run: Leonard Cohen is said to have written a total of over 80 different stanzas. The text varied from time to time on his live shows. The piece can therefore be sometimes melancholy, sometimes vulnerable, but also hopeful and heartwarming. Despite the many possible interpretations, the calm melody of the song always touches you in one and the same way. The cover versions, for example by John Cale and Jeff Buckley, often use different texts - but always the same sound, which can also be wonderfully transferred to other instruments.

Over the course of his long career, Leonard Cohen has consistently managed to bring deep emotions to life through sad musical works. Play our arrangements of “Hallelujah” in different levels of difficulty for solo piano or with orchestral accompaniment. 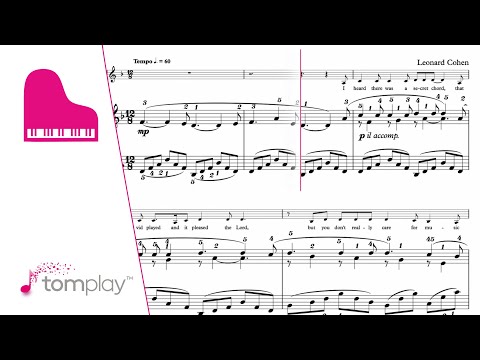 ▶️ Sound of Silence sheet music to play on the piano

“The Sound of Silence” is an iconic song by an equally iconic band: Simon and Garfunkel. It was first released in 1964 on their album Wednesday Morning, 3 Am and has since been considered one of the most important works of the era. The simple yet deeply penetrating atmosphere of the piece and its text have made it immortal. It also addresses a subject that is unfortunately far too familiar to all of us: the lack of communication between people and fellow human beings. So it's no wonder that the song has been covered so often and is always well received by artists and audiences alike.

Simon and Garfunkel were masters of their craft: So it's only natural that many of their sad songs to play on the piano are still well-received in today's generation. Play our arrangements of “Sound of Silence” for medium difficulty for solo piano. 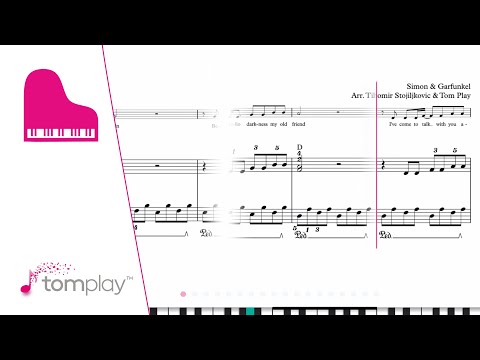 ▶️ Mad World sheet music to play on the piano

"Mad World" is a song by the British band Tears for Fears from 1982. The song made its breakthrough back then and remains a widely used work to this day - it has already been covered dozens of times in different styles; evidence of how universal the feelings it addresses are. The ballad is as tender as it is melancholic and shows the listener the world through the eyes of a teenager - a truly mad world, because it describes a life that is monotonous and meaningless. The last sentence "Enlarge your world" gives the song a rather optimistic punch line.

The song is one of the most famous, sad piano songs of modern times - and rightly so! The melody is in perfect harmony with the melancholy lyrics. Play our arrangements of “Mad World” for solo piano in multiple levels of difficulty. 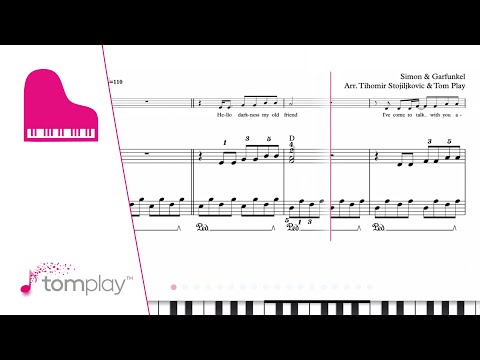 ▶️ Fields of Gold sheet music to play on the piano

Sting has written quite a few hits over the course of his career. However, Fields of Gold is definitely one of his most emotional works. The song appeared as the third song on his 1993 album Ten Summoner’s Tales. At first, it was only moderately successful, but over time it grew into one of the artist's greatest successes - which means a lot in a career such as that which Sting has led for decades.

The song paints a deeply moving picture of an English mansion in the 16th century and thus tells the love story of many people who fell in love with each other in the fields in front of it. Sting illustrated this unique image perfectly with its sad sheet music. Play our arrangements of “Fields of Gold” for solo piano in multiple levels of difficulty. 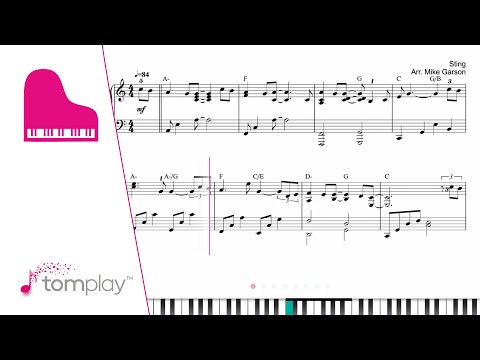 ▶️ People Help the People sheet music to play on the piano

“People Help the People” is originally a song by the British rock band Cherry Ghost from 2007. The song conveys an extremely important appeal that should touch every listener: Because it is about helping other people in need and always showing solidarity, especially in difficult times - a message that should always be carried on. So it's all the better that British singer Birdy played a cover version of the song in 2011. The best part about it: Her version was a huge success!

Let your emotions run free with this sad piano song. Play our arrangements of "People Help the People" by Birdy, available in a medium difficulty for the piano accompanied by an orchestra. 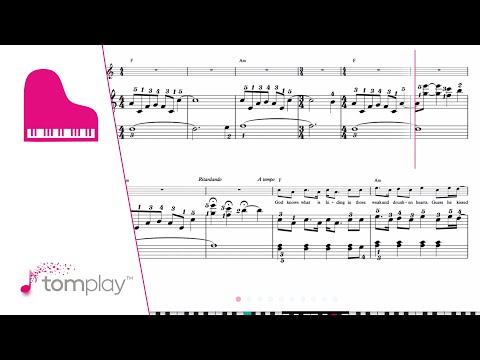