Share
Written By
Diane Segard
About the author
Diane Segard, a professional harpist and harp teacher, is first and foremost a passionate musician. Also a graduate in musicology, she loves helping you explore the various musical resources offered by Tomplay. Through her words, she communicates both her passion for music and her many experiences as a musician.
Date published
14/01/2021
Show/hide details

We are now officially in the period of Advent! In order to celebrate the festive season with music, we have selected for you in this article the most beautiful Christmas songs to play on the flute. Each piece includes a link to the sheet music, accessible to flautists of all levels.

▶️ Play "O Holy Night" on the flute with a piano accompaniment

The music was composed by Adolphe Adam in 1847 to lyrics by Placide Cappeau.

This carol, first known in French as "Minuit, Chrétiens", was then translated into English and is now internationally known as "O Holy Night". Recent performances by Mariah Carey and Susan Boyle have contributed to making this an unmissable song for Christmas.

Explore the Tomplay sheet music of "O Holy Night" for the flute at easy/intermediate level and play accompanied by the professional recording of the piano part! 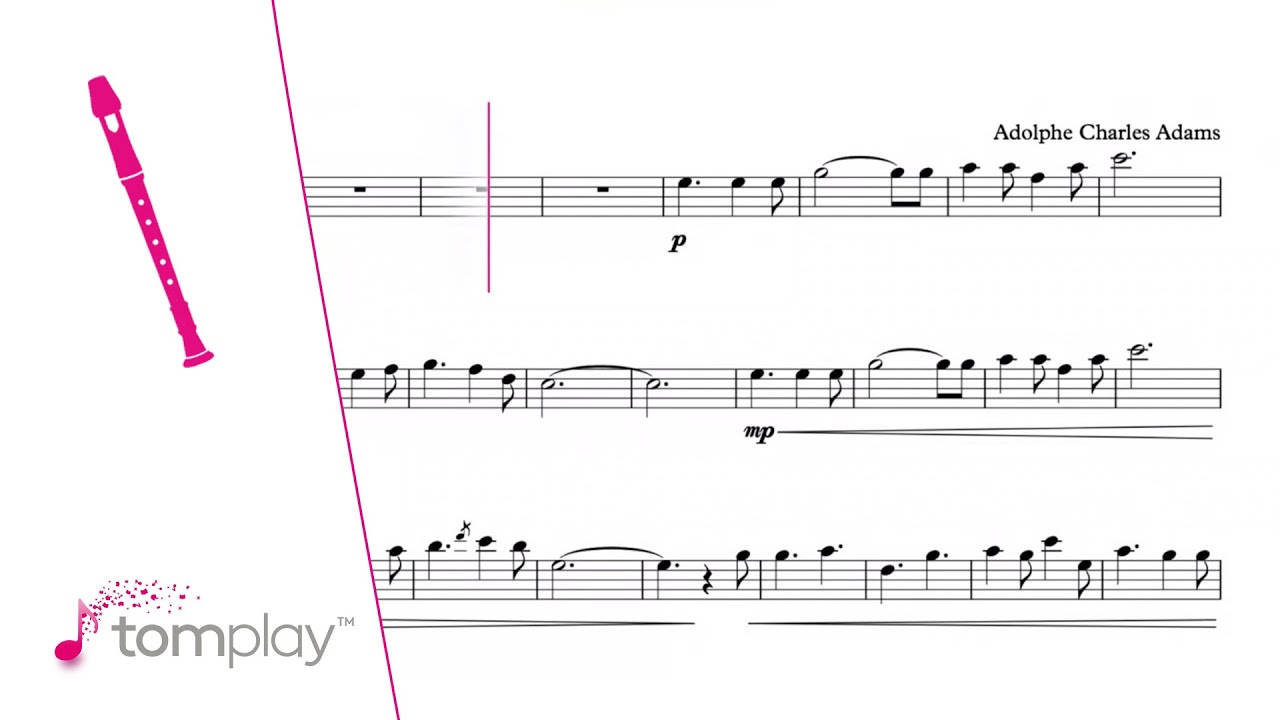 ▶️ Play "Let it Snow!" on the flute with an orchestral accompaniment

A huge popular hit, "Let it Snow!" is the work of the composer Jule Styne and lyricist Sammy Cahn.

Although its lyrics appear particularly appropriate for winter, you'll be surprised to learn that the song was written right in the middle of the summer during the hottest day of 1945!

Vaughn Monroe was the first person to record this title. It has since been covered many times by artists such as Frank Sinatra and Ella Fitzgerald during the 1950s and also, more recently, by Michael Bublé and Robbie Williams.

Explore the Tomplay sheet music of "Let it Snow!" for the flute at intermediate level, with an orchestral accompaniment synchronised with the sheet music. 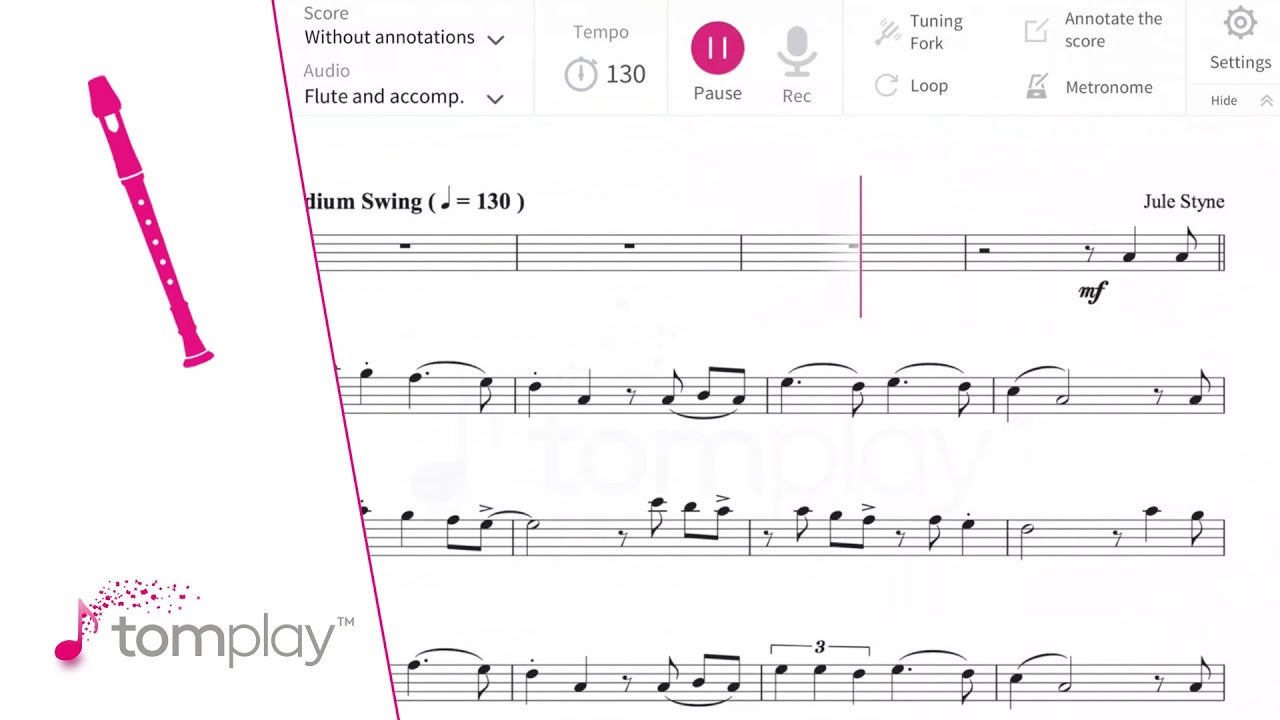 ▶️ Play "Ave Maria" on the flute with a piano accompaniment

The famous "Ave Maria" is among the most popular pieces by Schubert and remains a stand-out piece in the classical Christmas music repertoire.

To compose his piece, Franz Schubert based it on a German translation of a prayer to the Virgin written by Sir Walter Scott and taken from his long poem The Lady of the Lake (1810).

In a letter to his parents dated 1825, he congratulated himself on the success of his Ave Maria on the occasion of its first performance: "The audience experienced a great deal of pleasure at the solemnity of the hymn to the Holy Virgin; it would seem that a spirit of devotion and piety filled that of the listeners".

Explore the Tomplay sheet music of "Ave Maria" for the flute at intermediate level with a piano accompaniment and take advantage of the many Tomplay features to work on this piece in the best possible conditions. 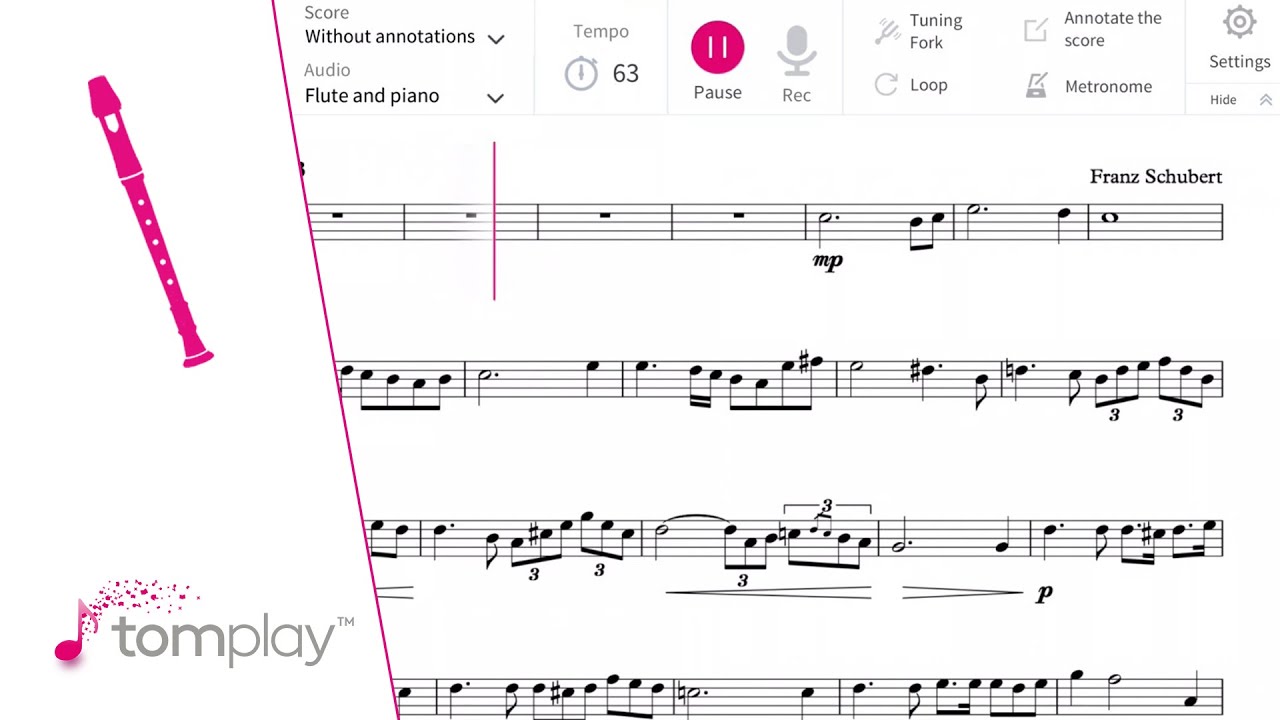 ▶️ Play "Jesu, Joy of Man's Desiring, BWV 147" on the flute with a piano accompaniment

"Jesu, Joy of Man's Desiring" is among the pieces by Johann Sebastian Bach most well known to the wider public.

The melody we know so well comes in fact from a religious cantata entitled "Herz und Munt und Tat und Leben" (Heart and Mouth and Deed and Life). The oboe is to the fore in Bach's original orchestration, accompanied by a small Baroque orchestra and a four-part choir.

The first version of this cantata was performed for the first time on 20 December 1716 (BWV 147a); perhaps this is the reason why it continues to be played during Advent.

Written by Salomo Franck, the lyrics used by Bach are sung in German. The English version of the lyrics have been attributed to Robert Bridges, British Poet Laureate from 1913 to 1930.

Explore our arrangements of "Jesu, Joy of Man's Desiring" for the flute with a piano recording: start the audio track, which will make your sheet music scroll automatically, and play with the accompaniment! 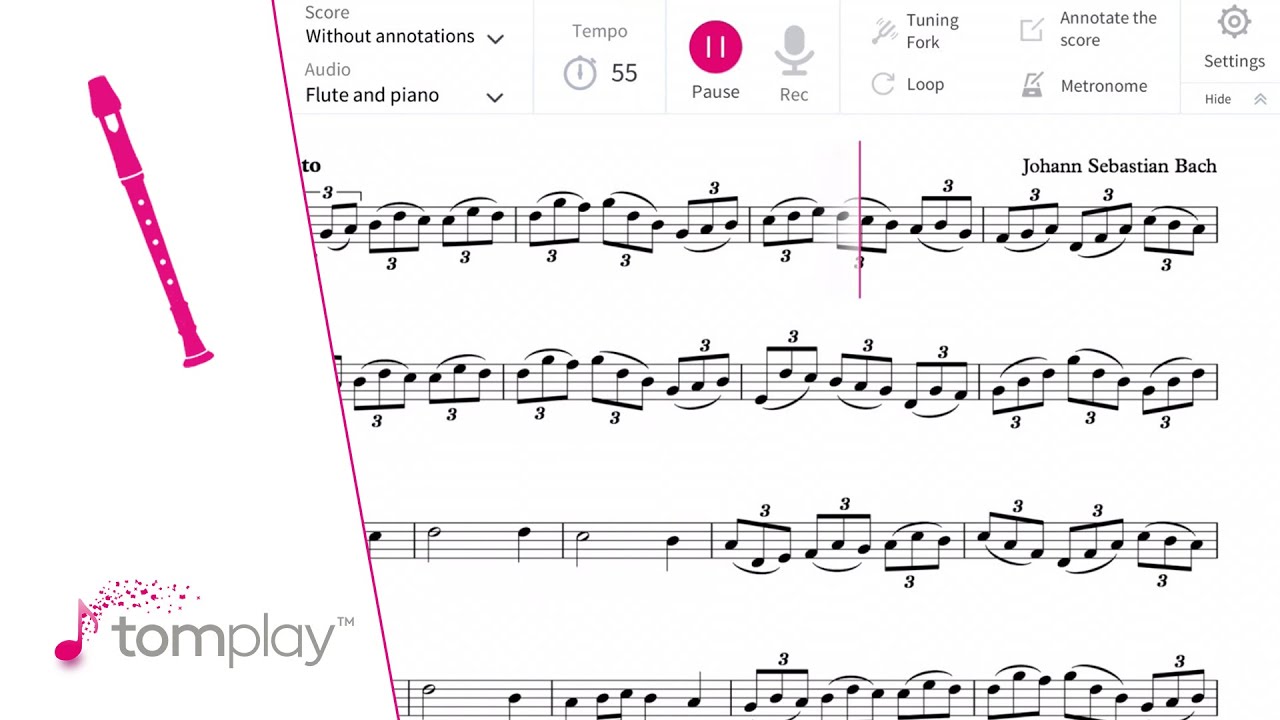 Its origins can be found in the Christian monastic life of the Middle Ages. During the week before Christmas, antiphonal music beginning with the exclamation "O" were sung in monasteries, thus expressing the expectation of the coming of Christ.

Although the original Latin text can be used with many different melodies, it was associated with its most well known air around 1850. Translated into many languages, this piece is now emblematic of the festive Christmas period.

Explore the Tomplay sheet music of "O Come O Come Emmanuel" for the flute at easy/intermediate level and play accompanied by the piano part recorded by us! 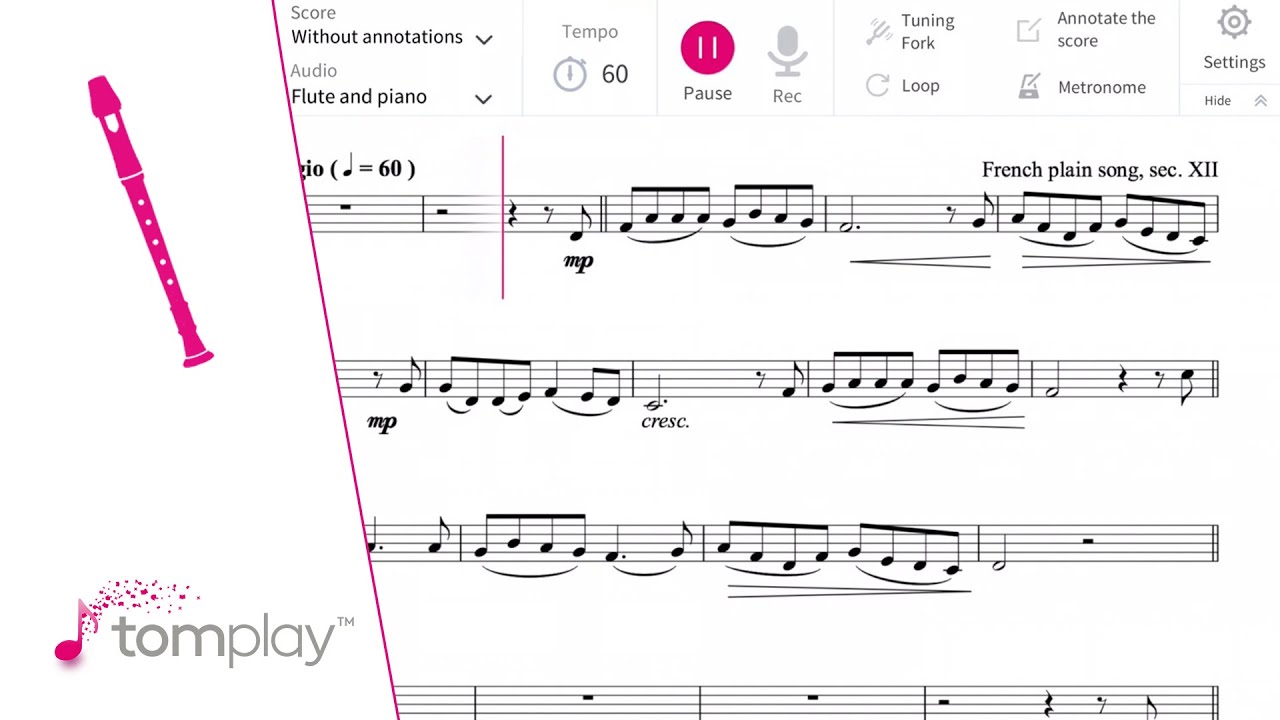 Particularly well known in the English-speaking world, "Away in a Manger" evokes the birth of the baby Jesus.

The origin of this piece remains quite hazy: for a long time, it was attributed to Martin Luther, founder of the Protestant Reform Church. The most widespread title during the XIXth century was therefore "Luther's Cradle Song".

The versions by the two XIXth century American composers James Ramsey Murray and William J. Kirkpatrick are the most widely used nowadays.

Explore the Tomplay sheet music of "Away in a Manger" for the flute at easy level and play accompanied by a professional orchestra! 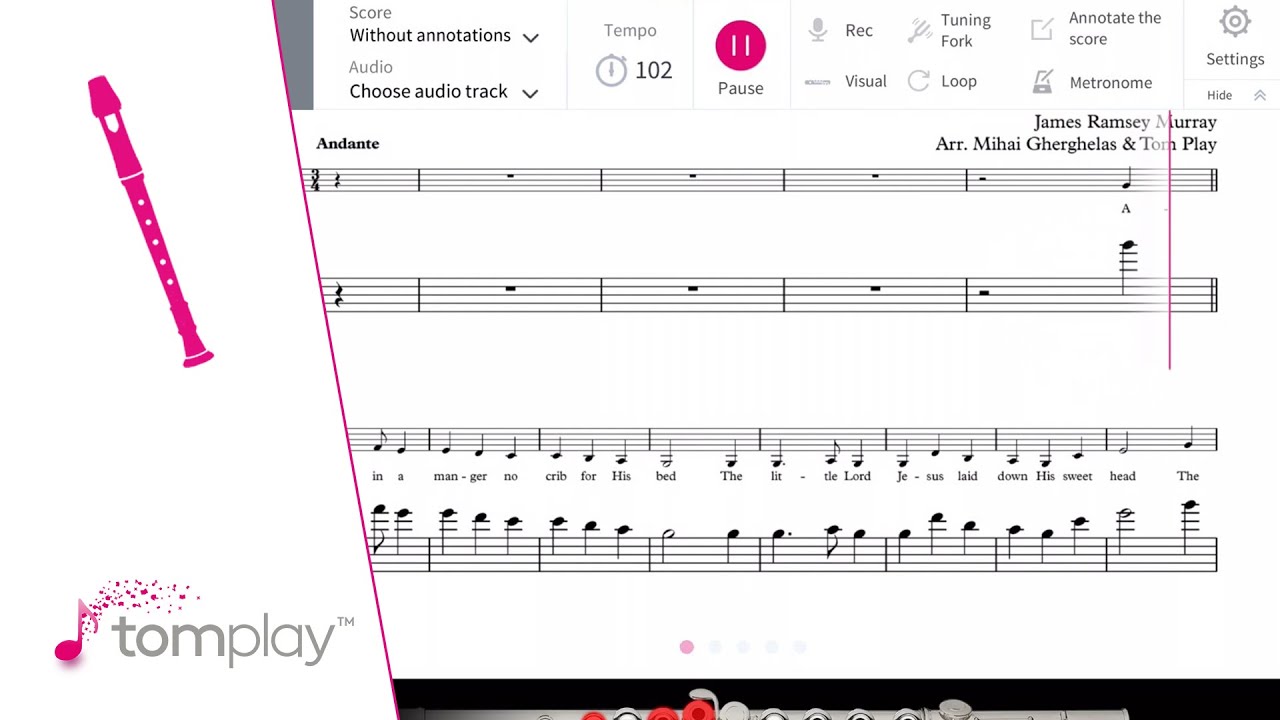 7. We Wish You A Merry Christmas

Composed during the XVIth century, "We Wish You A Merry Christmas" is a song originating from the West Country in England.

The popularity of this Christmas song is down to the composer and conductor Arthur Warrell. He arranged the melody for his own Madrigal Singers at the University of Bristol and played it with them in concert in December 1935.

The publication of his arrangement under the title "A Merry Christmas" the same year allowed it to circulate worldwide and now always accompanies our winter nights.

Explore the Tomplay sheet music of "We Wish You A Merry Christmas" for the flute at very easy level with a piano accompaniment and take advantage of the many features offered by Tomplay. 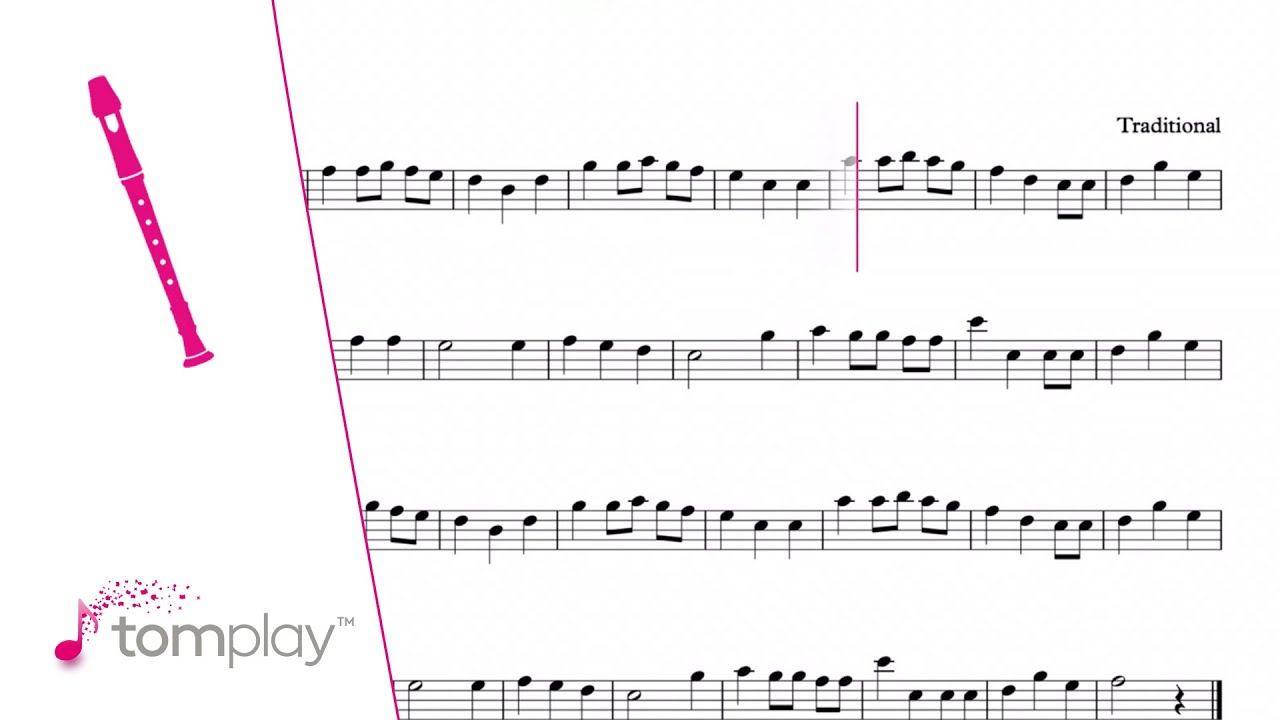 8. Have Yourself a Merry Little Christmas

Hugh Martin and Ralph Blane, who composed many songs for Broadway musicals and Metro-Goldwyn-Mayer, wrote "Have Yourself a Merry Little Christmas" for the film Meet me in St Louis (The Missouri Song). The first version was performed by Judy Garland.

Martin spoke about the circumstances in which the song was composed: "I found a little melody like a madrigal that I liked, but I thought couldn't work, so I played it for two or three days, then I threw it in the trash."

Very happily for us, Blane intervened and convinced Martin not to throw it away.

Explore the Tomplay sheet music of "Have Yourself a Merry Little Christmas" for the flute at easy/intermediate level with an orchestral accompaniment and take advantage of the many features offered by Tomplay! 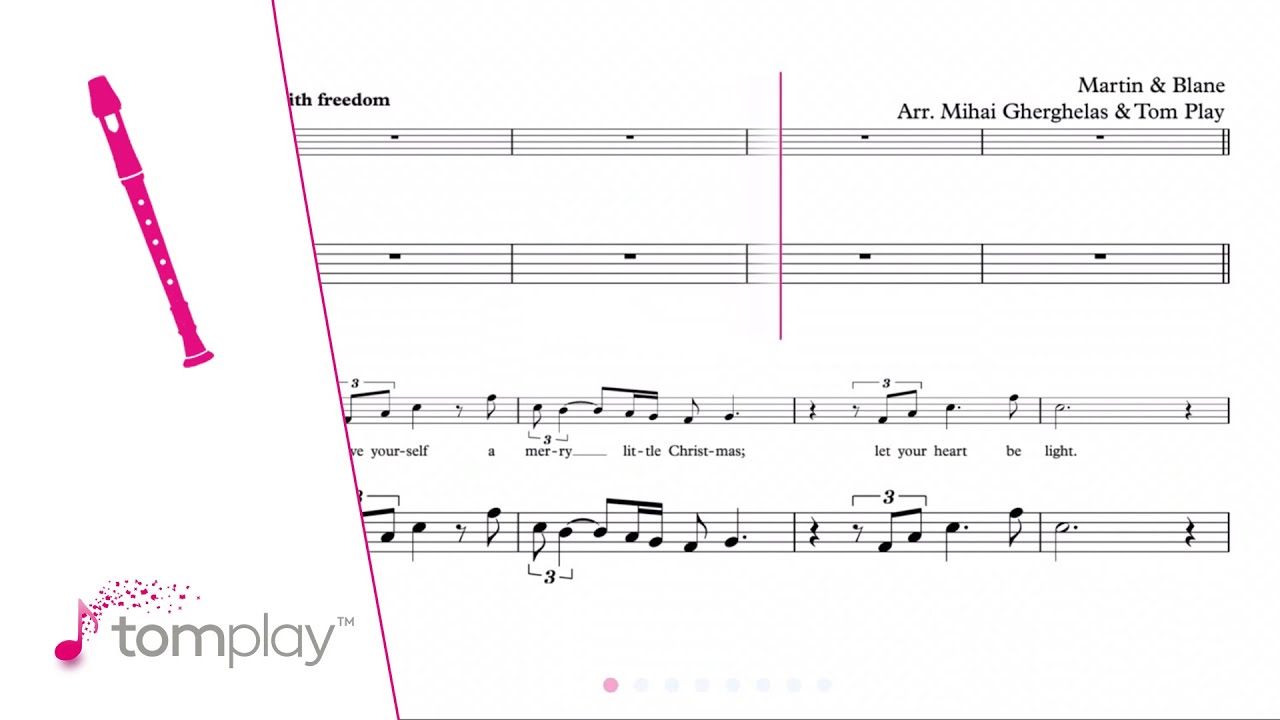 ▶️ Play "O Christmas Tree" on the flute with an orchestral accompaniment

A very popular song during Advent, "O Christmas Tree" puts the spotlight on the Christmas tree, the traditional symbol of the end-of-year festivities.

The origins of this piece are very old: a first version of the lyrics under the German title "O Tannenbaum" appears to have been found as early as the XVIth century. As the lyrics travelled through time, Ernst Anschütz composed the music we all know in 1824.

As curious as it may seem, the music of this German song has been used for various political uses: it is the official hymn of several American states and also that of the British and Irish Labour parties, known as "The Red Flag".

Explore the Tomplay sheet music of "O Christmas Tree" for the flute at easy level, accompanied by a professional orchestra. 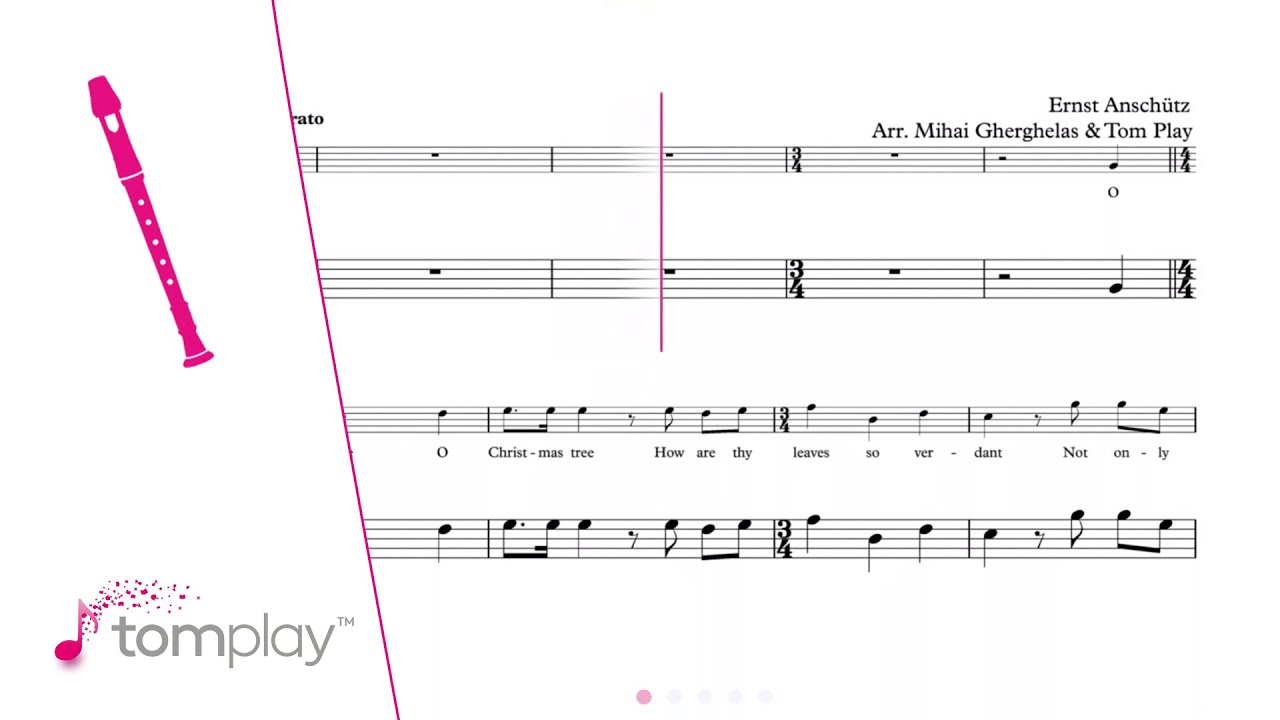 ▶️ Play "Silent Night, Holy Night" on the flute with an orchestral accompaniment

Played for the first time on the eve of 24 December 1818 in a village close to Salzburg, "Stille Nacht" ("Silent Night, Holy Night" in English) is a very popular Christmas carol.

The calm nature of the piece, as well as the lyrics describing the baby Jesus sleeping soundly, remind us of a lullaby.

The circumstances surrounding the composition of the piece were far from being calm, however. The priest Joseph Mohr called on Franz Xaver Gruber, the organist of the neighbouring town, to put some music to his song, but the organ couldn't be used on Christmas evening, perhaps owing to rust or the presence of mice. The authors therefore decided to use the guitar to accompany this song. They were far from imagining the still-current success this Christmas carol would have!

Explore the Tomplay sheet music of "Silent Night, Holy Night" for the flute with a piano accompaniment: start the audio track and get playing! 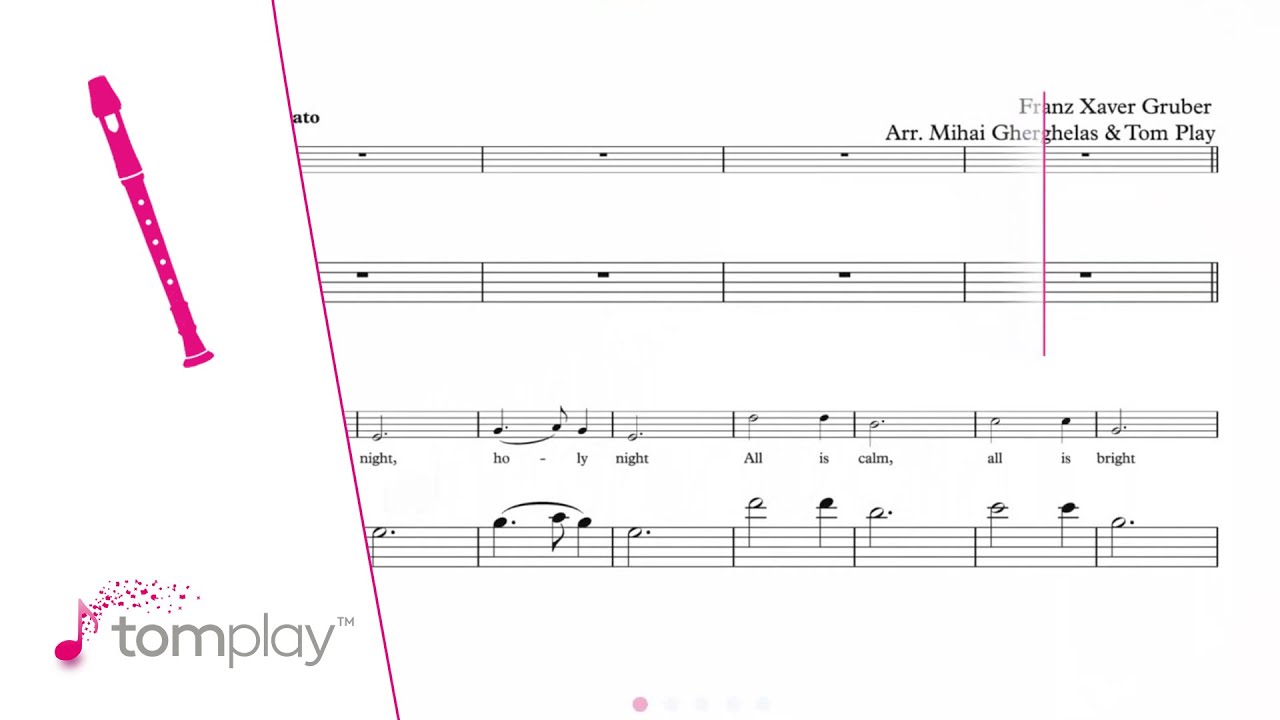 ▶️ Play "Feliz Navidad" on the flute with an orchestral accompaniment

Very popular in the Spanish-speaking world and the United States, "Feliz Navidad" is the most recent Christmas song in our selection: indeed, it was composed by the Puerto Rican singer and guitarist José Feliciano in 1970.

In his recording, Feliciano plays both the guitar and the cuatro, a traditional Puerto Rican instrument. The simplicity of the lyrics, with a chorus in Spanish and verse in English, has probably enabled this song to spread internationally.

According to Feliciano, the song represents a true "bridge between different cultures". It seems therefore particularly appropriate to exemplify the Christmas spirit.

Explore the Tomplay sheet music of "Feliz Navidad" available for the flute at easy level with an orchestral accompaniment. 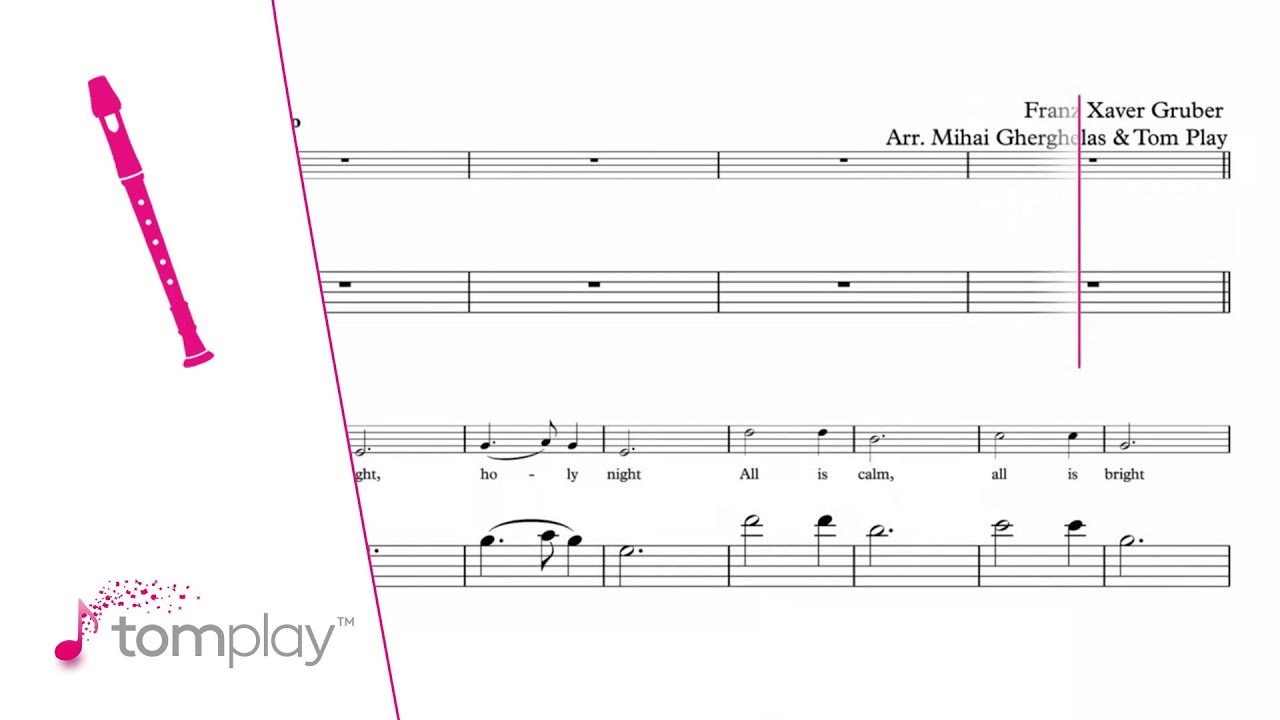