Share
Written By
Gwenn Daniel
About the author
Passionate about music from her childhood, Gwenn Daniel studied the piano at the conservatoire while also maintaining a steady stream of musical activities beyond this. This young piano teacher's constant lively curiosity encourages us to discover music from all eras and in all styles. She is now putting her literary and musical talents to the service of Tomplay and enjoys helping you discover the history of the great classics and guiding you through the vast choice of scores offered by Tomplay.
Date published
12/01/2021
Show/hide details

1. The Legend of Zelda - Main theme

▶️ Play the theme from Zelda on the piano with the orchestra

The Legend of Zelda - or simply Zelda - is among the most well-known video games. Produced by Nintendo, this saga action-adventure game created in 1986 offers you the chance to play the role of Link, responsible for liberating the kingdom of Hyrule and its princess Zelda from the hands of an evil warlord.

Written by Koji Kondo, the main musical theme of Zelda can be heard in almost all episodes to date (there are 19 of them). This theme is as well-known as it is successful and springs to the minds of all lovers of video games simply by reading the word "Zelda"!

Explore the Tomplay sheet music of the main theme from Zelda for solo piano or with orchestra in several levels and play accompanied by the professional orchestral recording synchronized with the sheet music. 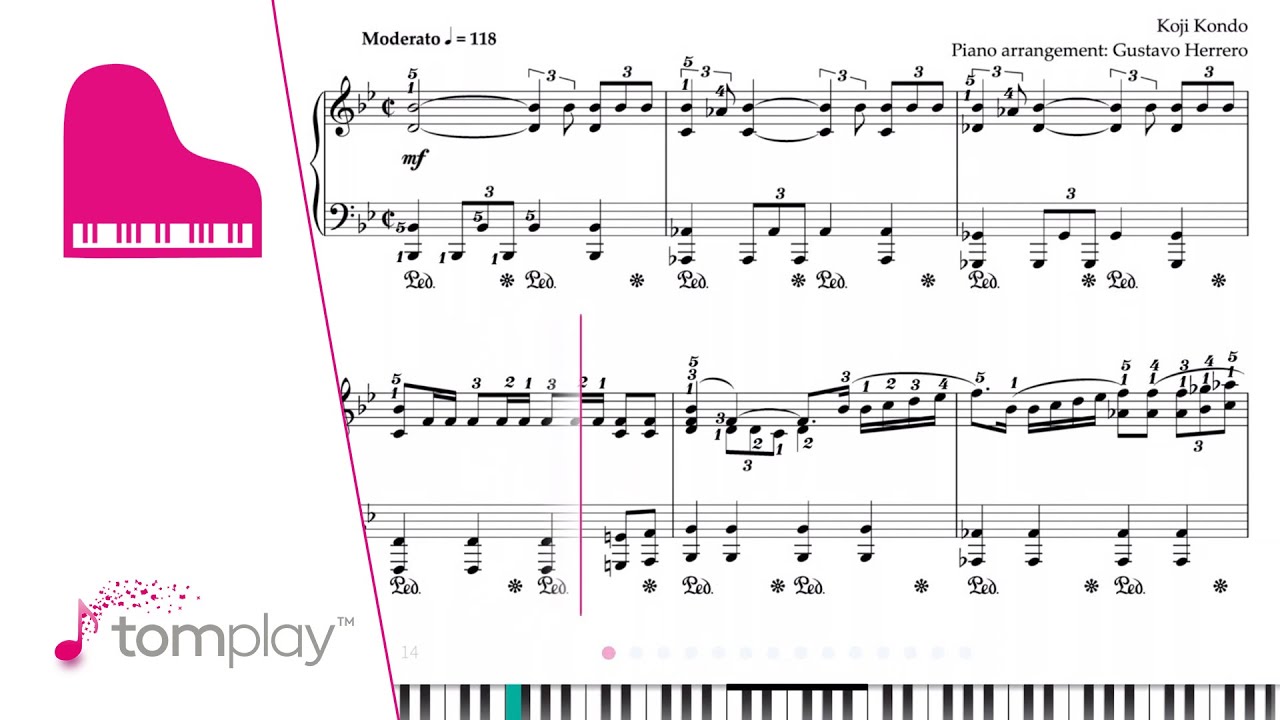 2. The Legend of Zelda - Song of Storms

Remember the frenetic sermon by Flat in Majora's Mask when you play this song: "You who do not fear the dead, learn well the song that is inscribed behind me... And if you ever meet my brother, I'd like you to inform him... The thousand years of raindrops summoned by my song are my tears. The thunder that strikes the earth is my anger!"

Explore the Tomplay sheet music of the "Song of Storms" for solo piano or with orchestra in several levels and play accompanied by the professional orchestral recording recorded by us. 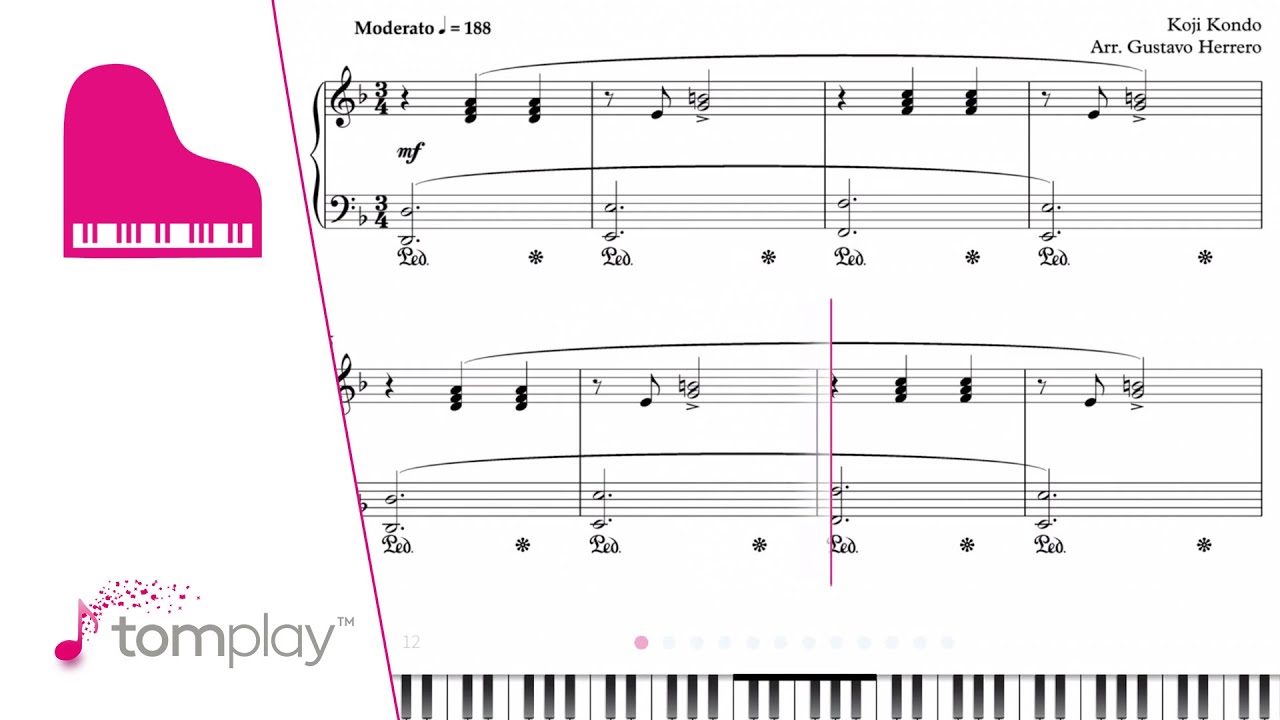 ▶️ Play the theme from The Last of Us on solo piano

Video games have evolved a great deal. This is obvious when looking at The Last of Us. This game had a profound impact on the way video games have been designed and presented generally and was revolutionary in its way of telling interactive stories.

It is a very artistic video game, at the forefront of progress, accompanied by a soundtrack which is just as artistic, moving, heart breaking and astonishing.

The theme song of this giant by Gustavo Santaolalla includes a brilliantly-used guitar and distant percussion. You can also hear fine electronic touches establishing the modernity of the composition, while retaining a certain degree of simplicity.

Explore the Tomplay sheet music of the main theme from The Last of Us for solo piano and take advantage of the professional recording of the work included with the sheet music, to listen to simply for pleasure or for inspiration. 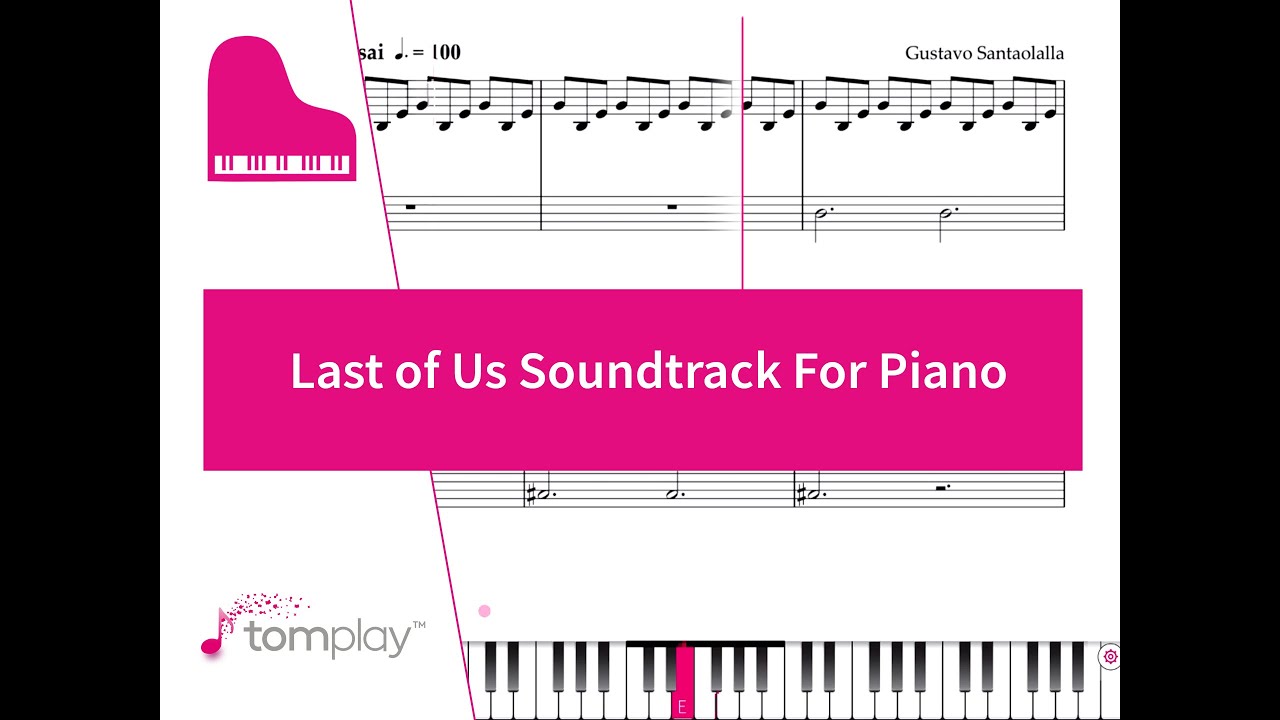 "Megalovania" is taken from Undertale, an independent video role-game developed by Toby Fox, in which you control a child who has fallen into the Underground, a world populated by monsters. This rhythmic piece, famous in the world of video games, is played during the final battle.

Did you know that the famous song was written by the creator of Undertale himself? It was created well before being associated with the hooded skeleton in the game, as Fox had composed it in 2009.

Explore the sheet music of "Megalovania" for solo piano in two levels of difficulty and take advantage of the many features offered by Tomplay. 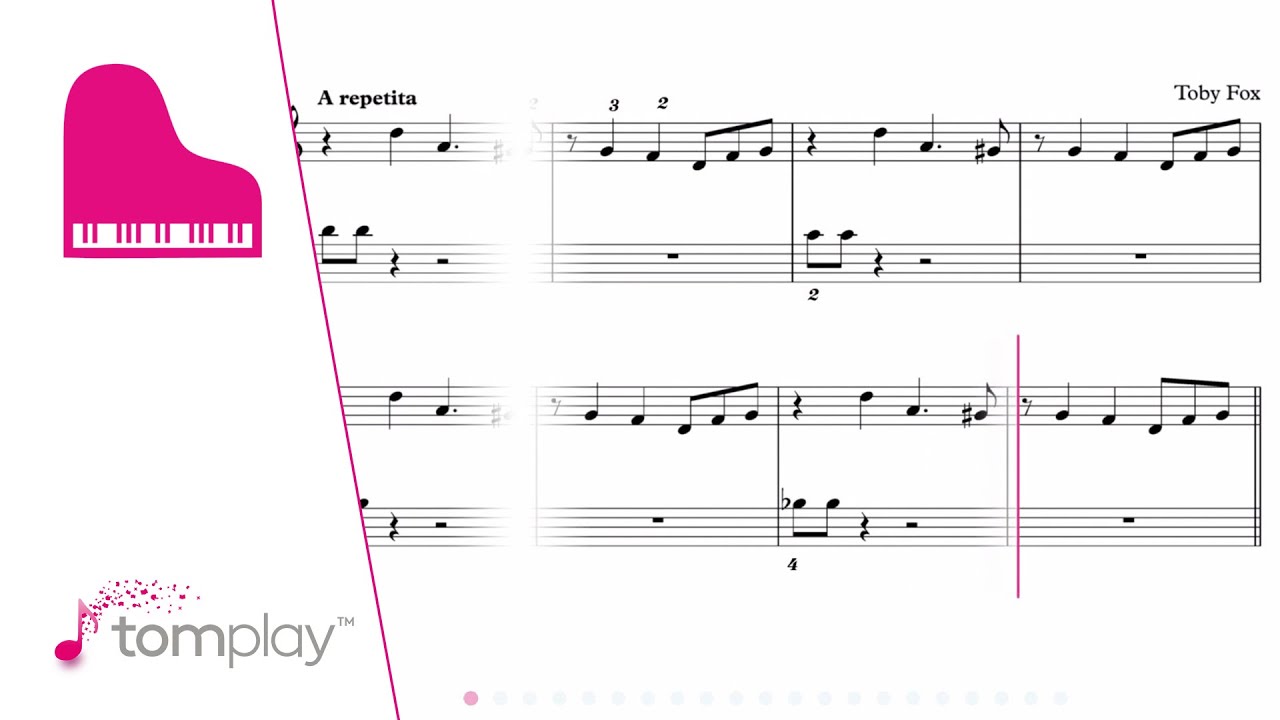 Who doesn't know Pokémon? The mascots of an entire generation, they have had a huge cultural impact in many countries since their creation in 1996.

The theme song from the Pokémon cartoon was written by John Siegler and John Loeffler. Since its release, it has become practically synonymous with the Pokémon franchise, since the lyrics "Gotta catch 'em all!" have become the official slogan in English.

Explore the Tomplay sheet music of the main Pokémon theme for solo piano and take advantage of the professional recording of the work included with the sheet music, to listen to simply for pleasure or for inspiration. 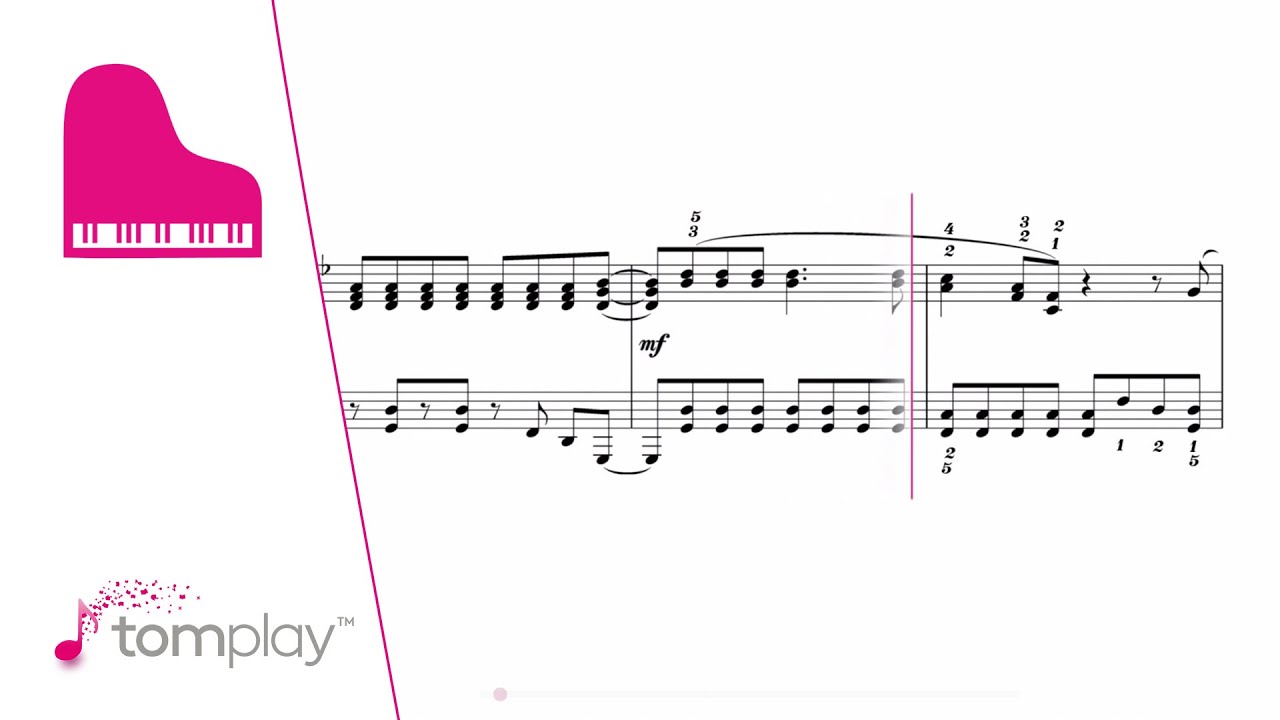 "Sweden" is without doubt the most popular song of the whole soundtrack of the Minecraft game. It is a discreet, calm piece, which begins with a slow, somber progression of chords on the piano.

The strings grow in magnitude as the piano places its melody. The strings stop and the piano changes key, accompanied by discreet horns which add a spicy color to the piece. The instrumentation slowly gives way in a submarine atmosphere, then some pizzicato chords briefly repeat the main theme. Finally, a glockenspiel and piano appear for a spell-binding finale.

Here, the German musician Daniel Rosenfeld, better known as C418, has given us a very pleasant piece to listen to, even for those who have not played Minecraft. For players on the other hand, it is an incarnation of the game's aesthetic in a world of survival. It is both sad and grandiose.

Explore the Tomplay sheet music of "Sweden" for solo piano and take advantage of the many features of Tomplay to work on the piece in the best conditions. 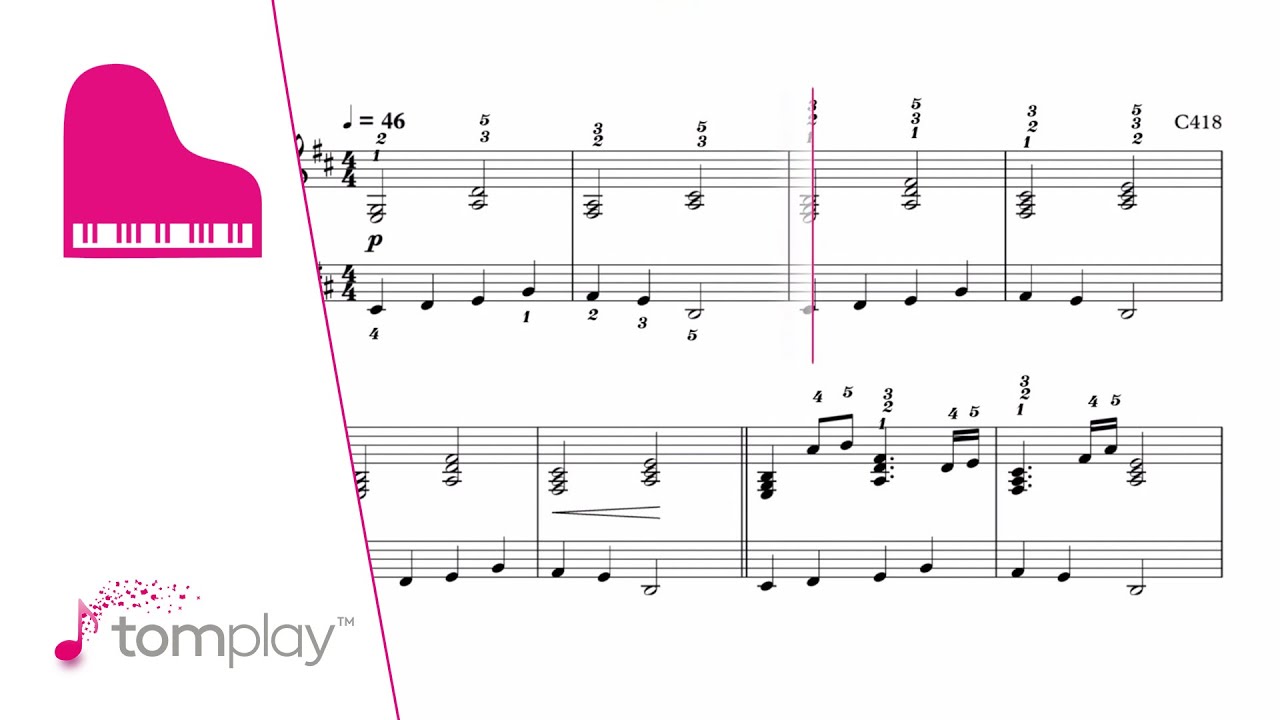 Detroit: Become Human is one of those games which could be said to have been designed with passion. It is the same for its soundtrack, a touching combination of piano, synthesizers and orchestra.

The opening theme captivates listeners from the beginning of the game and accompanies the sequence where an android named Kara, one of the three characters in the story, is looking out of the window while blue LED lights flicker on her temple, indicating that she is learning to recognize the environment in which she has been (re)born.

This very moving piece, which recalls very much the soundtrack by Yann Tiersen for the now cult film Le fabuleux destin d'Amélie Poulain, generates all sorts of emotions. Be warned!

Explore the Tomplay sheet music of the opening theme of Detroit: Become Human for solo piano and take advantage of the professional recording of the work included with the sheet music, to listen to simply for pleasure or for inspiration. 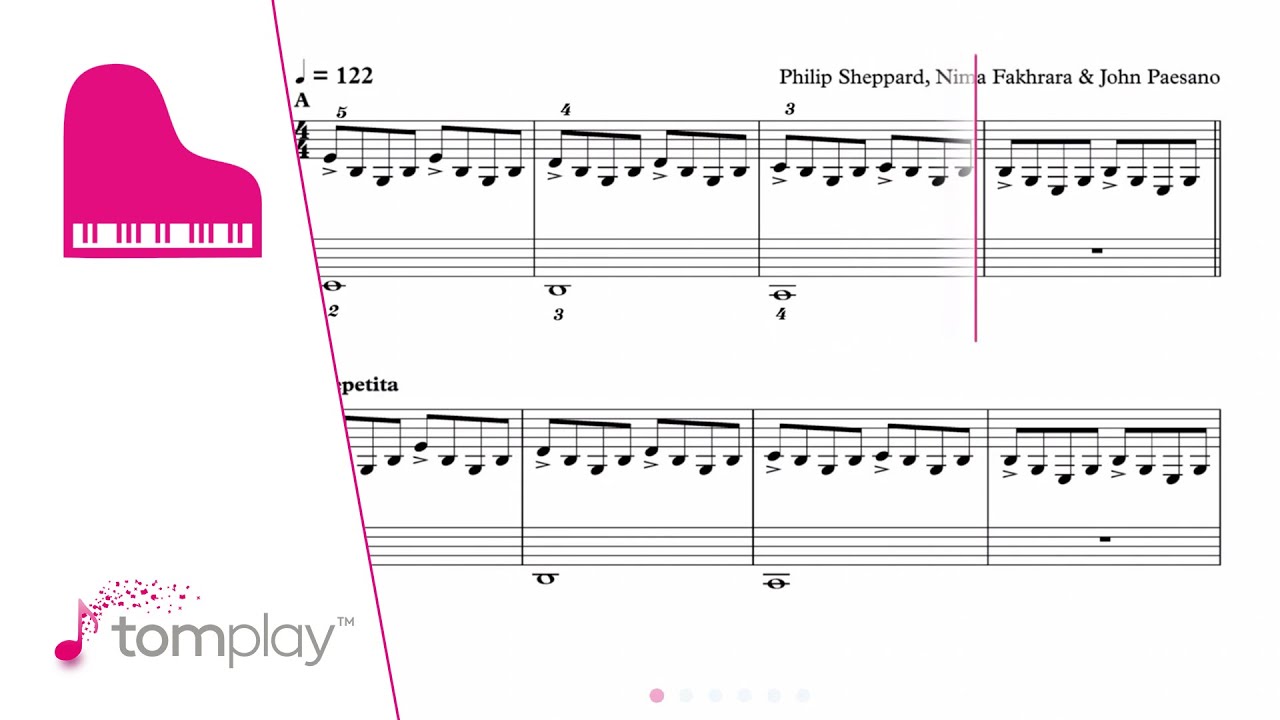 Jesper Kyd's emotionally-charged soundtrack for Assassin's Creed 2 has allowed players to realize that they had henceforth passed into a more complex, more animated and more powerful world than that of the original Assassin's Creed.

No other title embodies that better than "Ezio's Family" as even faced with titles such as "Earth", "Venice Rooftops" and even "Flight Over Venice", it is "Ezio's Family" which has been promoted by the gaming community as the hymn of the saga.

This gateway to another world is always wonderful to listen to, whoever plays it. In fact, for fans of Assassin's Creed, "Ezio's Family" is a full character in the series.

Explore the Tomplay sheet music of "Ezio's Family" for solo piano and take advantage of the many Tomplay features, such as the separate hands function, allowing you to practise one hand accompanied by the high-quality recording of the other hand. 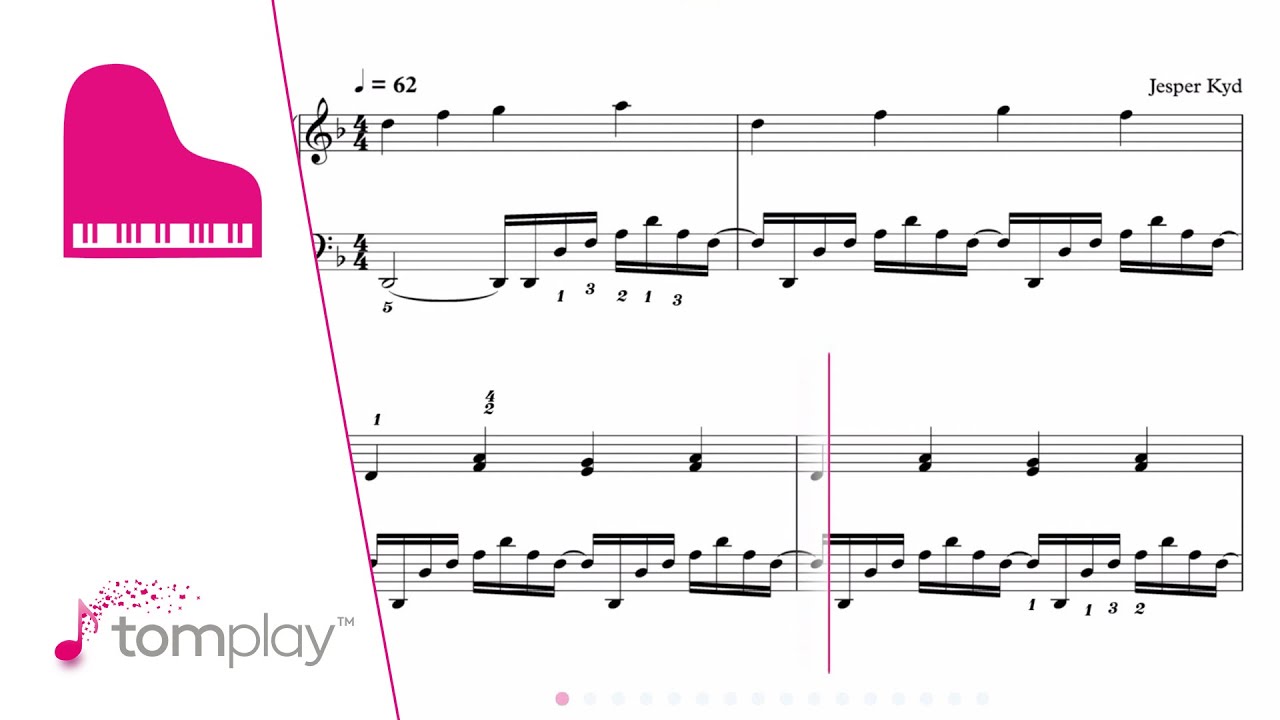 Silent Hill 2 is considered by many fans as the high point in the horror survival game series. The excellent soundtrack by Akira Yamaoka has contributed a great deal to the game's excellent reputation.

Contrary to the first part of Silent Hill, where fear and horror reigned, the basic atmosphere of the second part is slightly more convivial - even if it remains somber and disturbing - something directly reflected in the soundtrack.

A discreet and melodic piano piece can be found there: "Promise". This final sign-off by the maestro offers us a wonderful summary of various moments during the adventure.

Generally, the soundtracks by Akira Yamaoka in Silent Hill have a unique character and do not resemble each other in any way and there is no doubt that "Promise" is a wonderful piece to add to the repertoire of any pianist.

Explore the Tomplay sheet music of "Promise" for solo piano and take advantage of the professional recording of the work included with the sheet music, to listen to simply for pleasure or for inspiration. 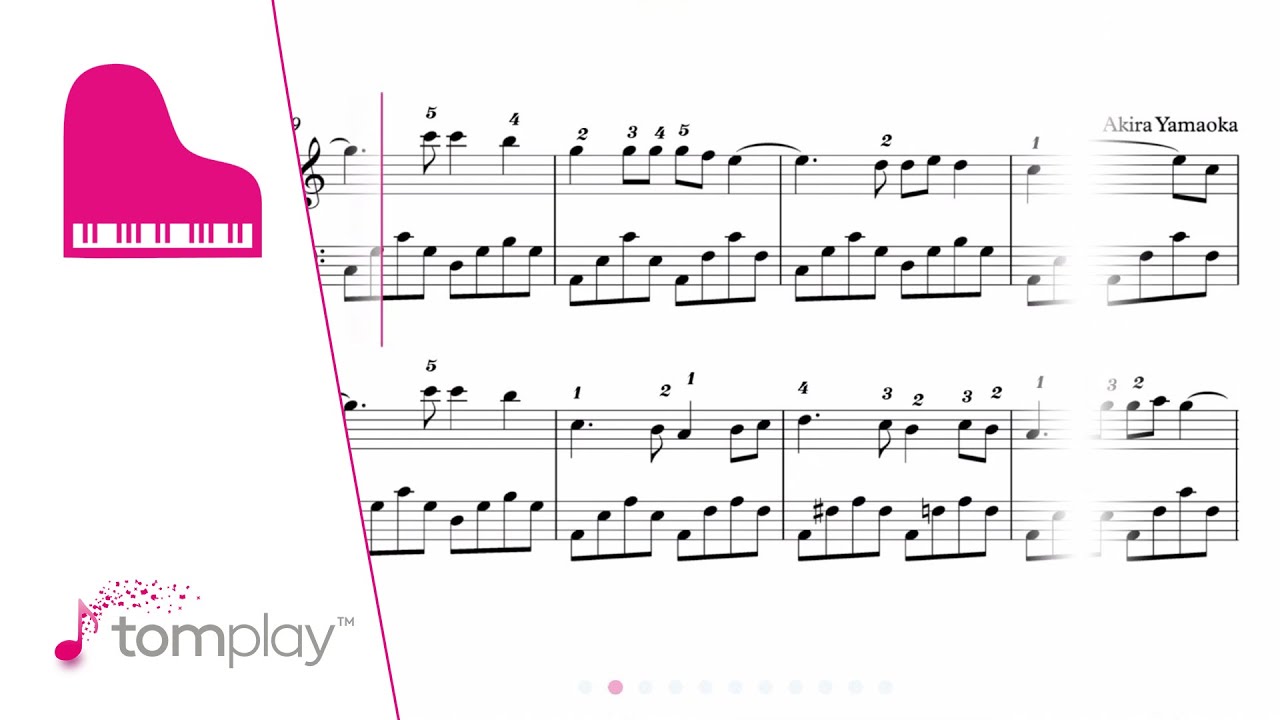