Share
Written By
Gwen Daniel
About the author
Passionate about music from her childhood, Gwenn Daniel studied the piano at the conservatoire while also maintaining a steady stream of musical activities beyond this. This young piano teacher's constant lively curiosity encourages us to discover music from all eras and in all styles. She is now putting her literary and musical talents to the service of Tomplay and enjoys helping you discover the history of the great classics and guiding you through the vast choice of scores offered by Tomplay.
Date published
5 days ago
Show/hide details

When you approach a violin concerto, it can be difficult to know which easy concertos to start with or even how to choose the movement which suits you best. This is why we have drawn up a non-exhaustive list of concerto movements in order to guide you in this choice, whether you are an amateur violinist or a teacher wanting to tackle a concerto with one of your students.

For each movement, we have included the link to the corresponding interactive sheet music allowing you to practice the violin part accompanied by a professional recording of the orchestra or the piano reduction of the orchestra.

▶️ Play the violin part of the 1st movement of the Violin Concerto No. 2 in B minor, Opus 35, with a piano reduction of the orchestra

Rieding's greatest fame lies in his contribution to Hungarian music and, in particular, musical life in Budapest. Born in Stettin in Germany in 1840, he first attended the recently-founded Academy of Musical Arts in Berlin, then Leipzig Conservatoire.

At the end of the 1860s, he was nominated leader of the orchestra of the National Opera of Budapest, where he stayed for thirty-two years and composed violin concertos and many teaching pieces for violin and piano.

The name Oskar Rieding appears rarely on concert programs. However, he is much more familiar to students of the violin! To date, his short pieces for violin and piano, specially designed for beginner violinists, have kept their place in lessons and auditions.

Only using the first position, the Violin Concerto No. 2 in B minor, Opus 35, is the first step towards the concerto language on the violin. It is a good choice for starting in this field, and also for learning to play dotted notes well.

Make use of the many tools offered by the Tomplay app in order to optimize your learning: annotate your score, adapt the tempo to work at your own rhythm, or repeat bars in a loop. When you feel ready, have a go and take advantage of a recording of the piano reduction of the orchestra synchronized with the sheet music to accompany you!

2. Millies : Concertino in D major (in the style of Mozart)

Hans Millies was a German composer and violinist of the 19th-20th century. He was the son of a pastor and studied the violin at the Berlin Musikhochschule with Joseph Joachim and Andreas Moser.

At the beginning of the First World War, he volunteered for military service and was finally imprisoned in Japan and interned in the Narashino camp. There, he set up a string quartet, an orchestra and organized musical life in the camp!

Thanks to the sheet music scrolling on your device, your musical immersion is total and you can find help or inspiration in the professional recording of the violin part available in the sheet music. 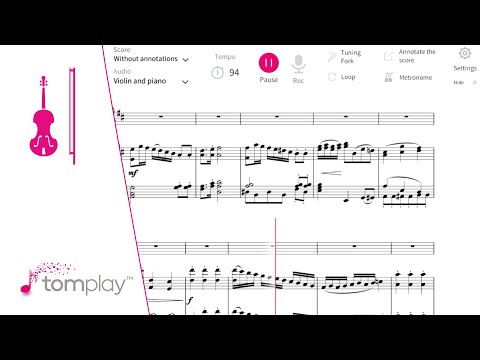 ▶️ Play the violin part of the Student Concerto No. 5 in D major, Opus 22 with a piano reduction of the orchestra

The German romantic composer Fritz Friedrich Seitz was also an excellent violinist and conductor who composed chamber music and, in particular, eight concertos for teaching the violin.

He was one of the first violinists of his time in Europe. He made many tours to several German cities and also to London and Holland.

Seitz's Student Concerto No. 5 in D major, which we are introducing here, is played in the first position and requires a certain degree of virtuosity. The bowing is complex, it uses double strings and the rhythms are varied.

Play the three movements of the Student Concerto No. 5 in D major, Opus 22, by Seitz for the violin with a piano accompaniment: start the audio track of the accompaniment alone, which will make your sheet music scroll automatically, and play accompanied by the professional piano recording.

Don't hesitate to be inspired by the professional recording of the violin part to support you to get the rhythm right, as well as for your performance. 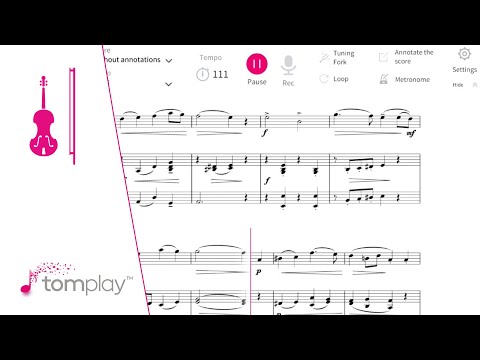 ▶️ Play the violin part of the Concerto for two violins in D minor, BWV 1043, with an orchestral accompaniment

The Concerto for 2 violins in D minor, BWV 1043, also known as the Double Violin Concerto, by Johann Sebastian Bach is one of the most pertinent examples of works from the end of the Baroque period.

The place and time at which he wrote this concerto are still uncertain. Did he do it while he was at Köthen, or later in Leipzig, before making an arrangement of it for two harpsichords transposed into C minor, BWV 1062?

As well as two soloists, the concerto is written for strings and basso continuo. It is characterized by the subtle, but expressive, the relationship between the two violins throughout the work, mainly in the Largo ma non tanto, where the orchestra is limited to playing chords.

Considered to be one of the composer's most successful works, this concerto imitates the structure of a fugue and makes use of counterpoint. Well-known violinists who have recorded it include Itzhak Perlman, Isaac Stern, and Anne-Sophie Mutter, among others.

This is a must in the violinist's repertoire! A good chance to practice not only playing as a soloist but also chamber music.

Download the violin 1 or violin 2 sheet music of the Concerto for two violins in D minor, BWV 1043, and play accompanied by the audio track of the other violin, as well as by the multi-track professional orchestral accompaniment: start the recordings of the other violin and the orchestra synchronized with the sheet music and immerse yourself in the work playing your own part. Being accompanied in your effort by a high-quality recording of the orchestra is a good way to progress and enjoy practicing, as well as encouraging you to keep to the tempo and progress in your performance of the piece. 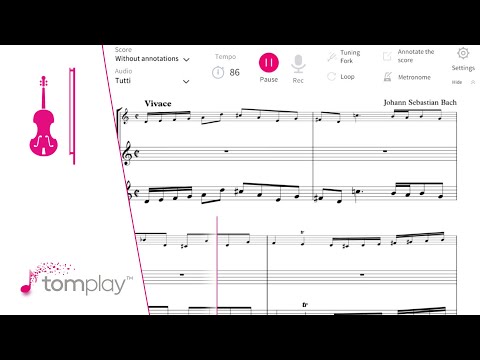 ▶️ Play the violin part of the Concerto No. 8 for two violins in A minor, Opus 3 with a piano reduction of the orchestra

L'estro armonico, Opus 3 (which translates as "Harmonic invention") is the title of a series of twelve Concertos for one, two or four violins and orchestra by Antonio Vivaldi.

This is his most well-known concerto work after The Four Seasons but was above all the one which made his name in Europe.

In order to put together this cycle, it would appear that Vivaldi chose the most accomplished from among his compositions. Among them is the Concerto No. 8 for two violins in A minor, which we are inviting you to perform here.

This concerto is ideal for introducing soloists to leading an orchestra: in this way, they can practice their role as a soloist, chamber musician, and leader!

With Tomplay, you have the possibility of playing the violin 1 or violin 2 part, accompanied by the other violin and by the piano reduction of the orchestra, synchronized with the score. 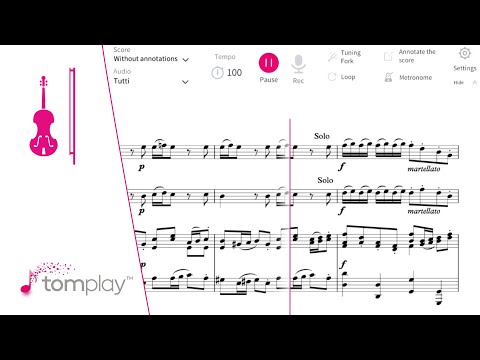 ▶️ Play the violin part of the Violin Concertino in A minor, Opus 14, with a piano reduction of the orchestra

The musician, teacher, and composer Leo Portnoff was a teacher at the Stern Conservatoire in Berlin for nearly ten years and arrived in the United States in 1922. He first lived in Brooklyn, then moved to Florida to teach music at the University of Miami.

Portnoff's Concertino in A minor is a highly nostalgic piece and one of this 20th-century composer and teacher's main works, with his Fantaisies russes.

This Concertino is ideal for preparing to play large concertos: it calls you to work on virtuosity through working on speed, complex bowing, and the use of double strings.

Thanks to the Tomplay app's technology, you can play the Concertino in A minor accompanied by a professional recording of the piano reduction of the orchestra! You can also adapt the tempo according to your progress in performing the sheet music and go over bars you're not happy with as many times as you like by activating the "loop" feature. 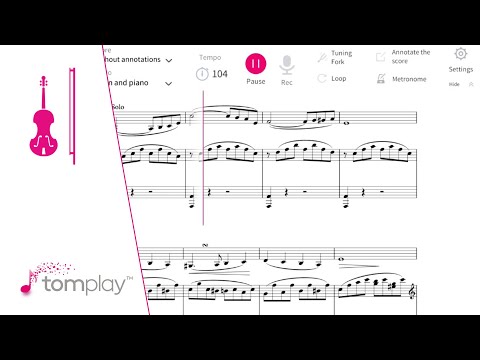 ▶️ Play the violin part of the Second Movement of the Violin Concerto in A minor, BWV 1041, with an orchestral accompaniment

Bach's two solo violin concertos may be well-known, but we know next to nothing about their origins. We don't know when, where or why he wrote them.

We don't know either whether Bach played the solo parts himself, although we assume he did. He was a distinguished violinist who liked to conduct his orchestra while playing the viola, where he could be at the heart of things, both musically and physically.

In the Violin Concerto in A minor, the soloist and orchestra do not share a great deal. It is only in the last phrase of the movement that all these elements come together and all the instruments play at the same time.

The second Andante movement of this Concerto is useful for refining your musicality: you can work on your phrasing in order to make the notes sing out elegantly.

Accompanied by an orchestra recorded on a very high-quality audio track, you have the option of recording yourself, setting the volume of your recording track separately from the track of the audio accompaniment. You can then listen to your own performance of the second Andante movement of the Violin Concerto in A minor, BWV 1041, in order to sharpen up your playing.

You can also use the many other features offered by Tomplay in order to practice under the best conditions and take maximum advantage of the richness of all these superb Concertos! To your violins! 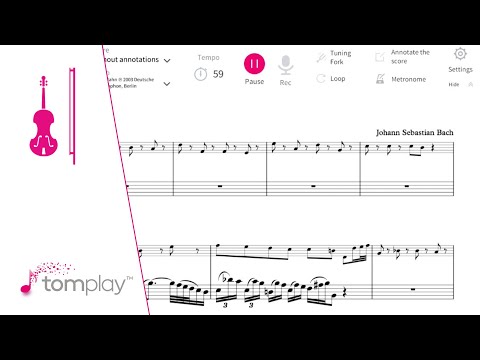