The 10 most beautiful Christmas carols to play on the guitar

Share
Written By
Marcel Alber
About the author
As a passionate guitarist and former metal singer, Marcel Alber has been fascinated by the music of every genre from an early age. Since then he has had a strong network in the music scene in Frankfurt am Main and is constantly looking for talents to inspire him. In addition to music, it is literature that he deals with in depth professionally. In order to give you the best Tomplay experience, he combines both talents and helps you to discover the best scores in our catalogue.
Date published
06/10/2021
Show/hide details

The 10 most beautiful Christmas carols to play on the guitar

Thanks to Tomplay you can learn these songs now and play them right on time for Christmas! For each song, we have included a link to the Guitar Sheet Music and Tabs. Tomplay allows you also to listen to a professional recording of each song which is synchronised with the Sheet Music. This will make learning easier for you! Note that we have also gathered these beautiful Christmas  songs in a collection which you can access here:

Soon it will be that time again: the bells are ringing, the snow is falling and the choirs are singing. Christmas is right around the corner! That means: prepare yourself to give away and to be given presents. The Christmas season can often be quite stressful, while still being one of the most beautiful times of the year: Think about all the delicious food, the nostalgic smells - and of course the music. Christmas gave birth to numerous immortal songs!

In this article, we have put together a selection of the 10 most beautiful Christmas carols for you to play on the guitar. Take the chance and play the biggest hits to get in the right mood for this time of the year. Because the right music is just as important at Christmas as the gifts - and if we're all being honest, that's what we're looking forward to the most, right?

Silent Night, Holy Night is a song without which Christmas wouldn't be the same. For many it is the ultimate Christmas carol - and rightly so! The song was appropriately premiered for the first time on December 24th 1818 in the Roman Catholic Church of St. Nikola in Oberndorf bei Salzburg. The melody comes from Franz Xaver Gruber, the text in turn from Joseph Mohr.

Since then, the song has been heard in every house and church on Christmas Eve every year. Hardly any other melody provides such the peculiar atmosphere that you want at Christmas. The song has long since broken the boundaries of the German language: The text has now been translated into over 320 languages ​​and is sung around the world.

It's worth practising the melody on the guitar so that you can always create the right atmosphere at the right moment. At Tomplay, we have created an easy Guitar arrangement of Silent night, Holy night. You can choose between the sheet music or the tabs to practise the song and can use the professional audio recording included as a guide.

2. We Wish You a Merry Christmas

Did you know already? The famous line “Now bring us some figgy pudding ... we won't go until we get some” from this popular Christmas carol refers to the sweets that carolers were given for their wonderful singing. These Christmas carolers were mostly poor people. It was, therefore, all the more important that they were appropriately rewarded for their singing.

And they persisted: only when they had been paid by the wealthy families for their performance did it stop. To this day, the delicacy can therefore be found on Christmas markets all around the world.

Sit at your guitar and play the melody with which you unmistakably wish a Merry Christmas! With Tomplay's interactive sheet music, you can play We Wish You a Merry Christmas on your guitar. You don’t know how you read sheet music? Don’t worry! We also provide a tabs version as well as a visual guitar below the tabs which highlights the notes to play. 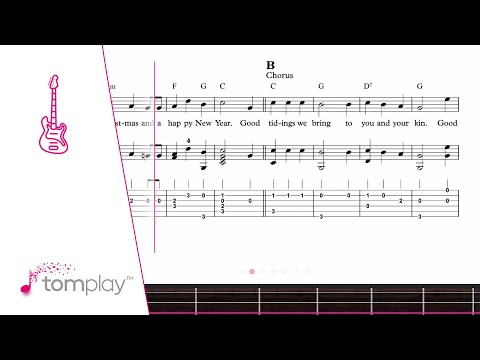 One of the most popular Christmas carols of all time - even though, strictly speaking, it is not a Christmas carol at all! Jingle Bells is one of those songs that pops into your head when you think about Christmas. But if you take a closer look at the lyrics, it quickly becomes clear: Christmas is not mentioned at all!

Rather, Jingle Bells (or The One Horse Open Sleigh) is about riding a horse-drawn sleigh, as the famous chorus expresses quite clearly. And yet the text miraculously describes the overwhelming happiness that we all want to feel at Christmas.

Jingle Bells was written by James Lord Pierpont in the fall of 1857. It then happened in the 1860s and 1870s that it established itself as a Christmas carol. There are now countless different versions of the song. But they all have one thing in common: They really create the much needed Christmas spirit!

With this tune, you pull everyone into the Christmas spell! So grab your guitar and play our Guitar easy arrangement of Jingle Bells. Choose between the sheet music or the tabs modes and use Tomplay interactive learning features to help you learn this unique Christmas carol! 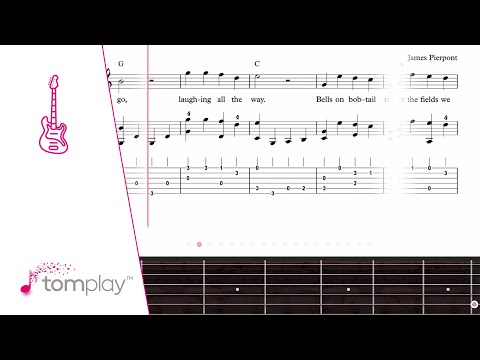 Is there a picture that creates more mood than a properly decorated Christmas tree? After all, that's what we often look forward to the most. So it's no wonder that a song that honours this very sight has been a popular Christmas carol for centuries.

O Christmas Tree was written in the 16th century. The text as we usually know it today was created by Ernst Schütz in 1824. Although there is no direct mention of Christmas here either, the song just fits too well to not be sung on Christmas Eve.

The melody is quite simple, which makes it an ideal piece for beginners. It is therefore often one of the first songs an instrumentalist learns. At Tomplay, we have prepared for you an easy Guitar arrangement of  O Christmas Tree. Choose between the sheet music and the tabs modes and use the professional recording included with the sheet to help you learn this must play Christmas carol. 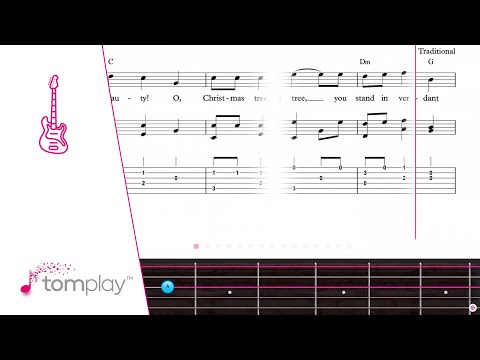 The lyrics to Joy to the World come straight from the Bible! So it's not surprising that the song is very well suited for Christmas. Isaac Watts wrote the text as early as 1719; however, the version we know and love today is by Lowell Maso and was composed in 1848.

Numerous artists have then recorded their own version of this Christmas Classic; including Johnny Cash, The Kelly Family, Mariah Carey, Neil Diamond and Dolly Parton. And the success is constantly growing: In North America, Joy to the World is the most published Christmas carol of all time!

We have prepared for you the Easy Guitar Sheet Music arrangement of  Joy to the World. Thanks to the Tomplay app, you can use interactive features such as the tempo changer, the self-recording feature or the annotation mode to help you learn this beautiful Christmas carol on the Guitar. 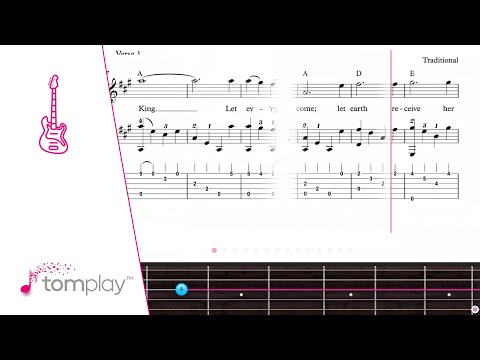 Away in a Manger is one of the most popular Christmas carols in English-speaking countries. Especially in England itself, the song is celebrated every year! The work was originally attributed to Martin Luther; however, it is now assumed that its roots lie in America.

Over the years, the text and the melody of the song have been changed again and again, which is why there are now countless versions and variations. The version from 1887 is called Mueller; it is by James Ramsey Murray and is very well known in the United States. The alternative tune called Cradle Song by William James Kirkpatrick is once again very popular in England.

Play Away in a Manger now on your guitar in one easy level of difficulty! Tomplay Sheet Music and tabs arrangement also contain a professional recording of the song for you to listen to and get inspired by when learning this beautiful Christmas Carol. 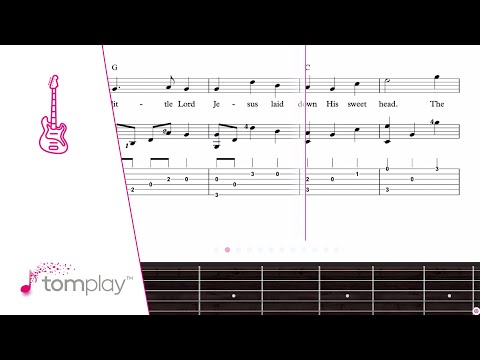 The melody of the English Christmas carol Deck the Halls is based on the Welsh song Nos Galan. This was originally sung on New Year. However, the melody exudes warm energy that is far too easy to combine with Christmas Eve.

The text is in perfect harmony with the melody to which every Christmas party gets the necessary momentum! Hardly any other song manages to convey the joy that you felt as a child when you saw the Christmas decorations for the first time of the year.

You've probably known this song all your life, haven't you? Then now is the time to finally play it yourself! With Tomplay’s interactive sheet music and tabs, you can now learn Deck the Halls on your guitar. 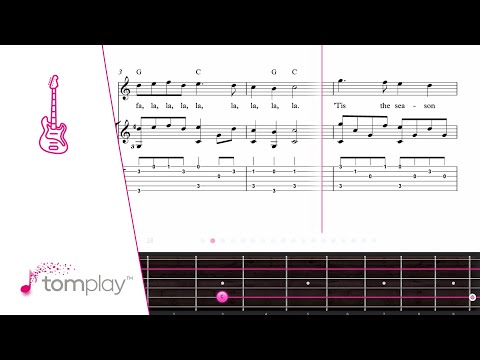 ▶️ Play the guitar sheet music (with tabs and chords) of What Child is This?

The rhetorical question at the beginning of the piece is introduced by a gentle melody. For the remainder of the song, answers are given that reveal the true nature of the child's birth. It's the perfect song to help you remember what Christmas Eve is all about: the hour of Jesus Christ.

So it is a must for every musician to have played What Child is This? at least once for Christmas! With Tomplay's interactive sheet music, you can now play the song on your guitar. 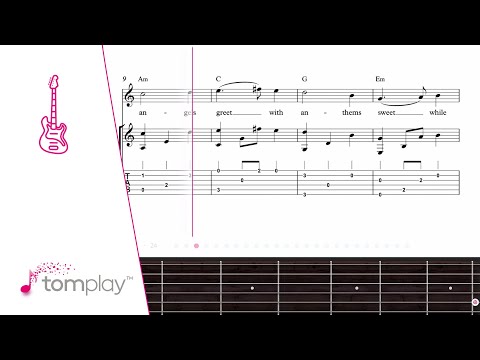 It continues with another song in honour of the birth of Jesus Christ! The First Nowëll is a famous English Christmas carol from the early 19th century. Nowell is an Old English form of the word noël; the french word for Christmas.

There are now numerous variations of the song in a wide variety of styles. The most traditional form, however, is the four-part setting by the English composer John Stainer - the perfect opportunity to sing the song with your family on Christmas Eve!

Immerse yourself in the traditional world of English Christmas carols! The First Noëll has a wonderful sound that you can bring to life perfectly on the guitar. With Tomplay's interactive sheet music, you can now play the song at an easy level of difficulty. 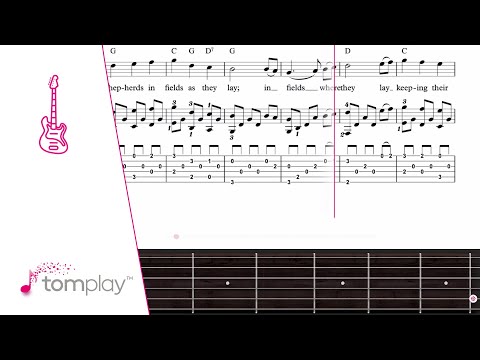 ▶️ Play the guitar sheet music (with tabs and chords) of Hark! The Herald Angels sing

Finally, we have another classic of traditional English Christmas music for you: Hark! The Herald Angels sing. The original text was initially written by Charles Wesley; George Whitefield worked on it until it became the version that is still mostly sung in churches today.

The melody, in turn, goes back to Felix Mendelssohn Bartholdy, the German composer and one of the most important musicians of the Romantic era. This special mixture of different talents from different backgrounds has led to the fact that the song has its own magical note.

Convince yourself! And play Hark! The Herald Angels now sing on your guitar. With Tomplay's interactive sheet music, you can now learn this Christmas song at an easy level of difficulty! 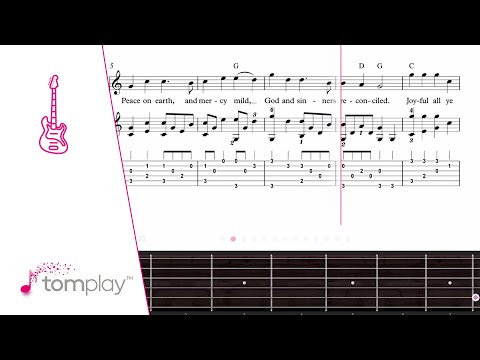 The best Pop, Rock and Film Music backing tracks for the guitar