Share
Written By
Clara Avrillier
About the author
Clara Avrillier was introduced to music from a young age, firstly singing in choirs, then playing percussion in several orchestras before going on to study piano and classical music in Scotland. Following a master’s degree in linguistics, she now brings together her musical and language skills to accompany you on your journey with Tomplay.
Date published
6 days ago
Show/hide details

Discover our selection of the most beautiful Yiruma piano pieces. You can find all the sheet music for these pieces on the Tomplay app and website.

Passionate about music from a young age, the South Korean pianist and composer Yiruma began learning piano at 5 years old. He was so intent on following his dreams that he went on to study music in England, graduating with a composition degree from King’s College London.

He released his first album Love Scene in 2001 which became an international success, and his career began to develop from there. In 2002, Yiruma became the first Korean musician to receive an invitation to perform at the Marché International du Disque et de l’Edition Musicale (MIDEM). He continued to release albums and develop his musical career until 2006 when he began military service in Korea. Even then, he continued to play piano on military bases throughout his two-year army stint!

Over the years, Yiruma has grown his international following and continues to tour the world. His style can be defined as a mix of neoclassical music with more modern influences.   In recent times, he has even collaborated with famous K-Pop stars, such as Hyolyn, opening the door for many people to discover the joys of solo piano music. This could be considered his greatest contribution to music: He has helped make classical music more accessible by writing works that include influences from a variety of other styles.

▶️️  Play the most beautiful Yiruma pieces on the piano

1. River Flows In You

River Flows In You (2001) has been dubbed the ‘Clair de lune’ of the 21st century by Classic FM, which is quite the compliment!

Yiruma wrote the piece while staying in London. He was sitting at his piano and watching an advert for the well-known Irish dance show, River Dance, and when he looked down at his fingers, ‘they looked like they were dancing on those keys’. This is why the melody has an Irish style to it.

The piece begins slowly, almost hesitant, before opening up into a much more flowing piece, like a river. As it builds up, it still retains its gentle quality thanks to the use of a higher octave melody and arpeggio runs.

Perhaps one of the reasons why it’s such a comforting piece is because the opening theme returns throughout. It’s reassuring to the ear as we can identify the same melody each time it comes back.

The structure of the piece is more like a pop song as it has a ‘chorus’, the opening theme, and ‘verses’, the other parts of the piece. It is a very clear example of Yiruma’s neoclassical style.

At Tomplay, you can play the Yiruma piano piece River Flows In You on solo piano - it’s set at an intermediate level.

Much of the piano music Yiruma wrote in his early 20s was inspired by love, romance, and nostalgia. An example of this is Kiss the Rain (2003), a stunning and calming piano piece. During a concert in Singapore in 2014, Yiruma himself told the audience that this song "can be played by anyone" - so give it a go!

This piece has a more melancholic feel to it, perhaps representative of the rain in the title.

The melody is often played an octave higher which adds to the sentimental feel of the music. The simple accompaniment in the left hand is very delicate and blends in beautifully with the melody.

In terms of technique, you will need to find a balance between the melody, and the accompaniment in the right and left hands.

Discover the Yiruma piano sheet music for Kiss the Rain for solo piano and use the separate hands feature for practice. The on-screen visual piano is also a great aid. 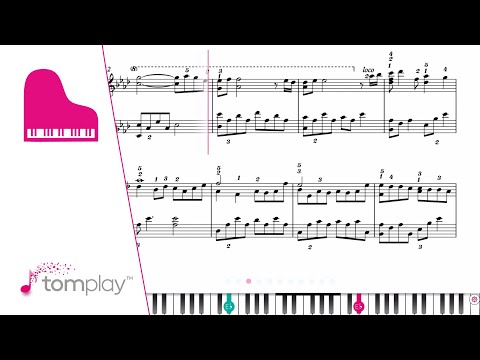 Given his wide range of top hits, Yiruma is often asked how and where he finds inspiration to write so many wonderful pieces. In an interview given in 2020, he stated he gets ‘inspired by everything that surrounds me...I also let myself imagine constantly’.

The Yiruma piano piece Maybe is littered with grace notes, which we hear right from the beginning of the composition. It adds beautiful ornamentation to the music and is very distinctive. The melody is balanced over two notes in the right hand, which is a wonderful opportunity for pianists to practice balance, as well as expression.

Maybe was so successful that in 2020, Yiruma released a Christmas version of the piece with more orchestration, to celebrate 20 years since his debut album was released. He wanted this new version to be a message of comfort during challenging times.

Head over to Tomplay.com to play the Yiruma piano sheet music for Maybe on solo piano. It is set at an easy to intermediate level. 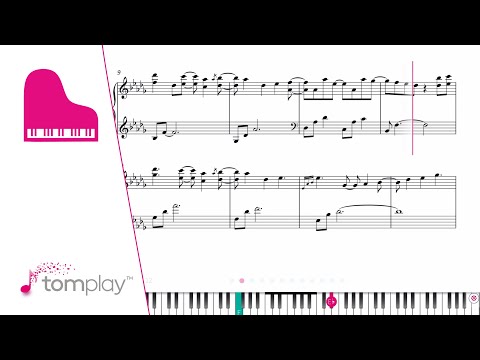 Yiruma was quoted saying "I just want my music to be the energy that makes many people want to live a better life". This really comes through in his music, as it’s comforting, peaceful, and incredibly uplifting.

Now onto our fourth Yiruma piano piece, Spring Time. It’s a lovely composition that follows a similar structure to the previous pieces. The rhythm of the melody is a little simpler, which allows early-stage pianists to give it a go. Using Tomplay’s separate hands' feature will help you to master this piece.

There are a lot of pedal markings in Spring Time and it’s important to learn how to ensure the left-hand accompaniment is smooth while the melody in the right hand is crisp and clean, despite the use of the pedal. There is a wonderful section in the middle where Yiruma develops the piano motif, like a variation.

The Yiruma piano sheet music for Spring Time is set at an easy to intermediate level at Tomplay, so it’s ideal for budding pianists looking to play the moving music of this gifted composer. 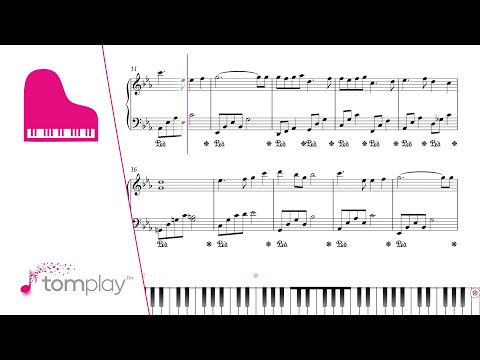 The fifth and final Yiruma piano piece we’d like to highlight is Moonlight, which is less well-known than his other pieces.

The opening melody in the octave above middle C is stunning and gives us the impression that we’re floating amongst the stars high in the sky. There is a lovely conversation going on between the right and left hands so when practicing this piece, you could use the Tomplay annotation feature to highlight when each hand should sing out.

Although the piece may appear simple to the eye, the song is divided into several sections which move between key signatures so watch out! 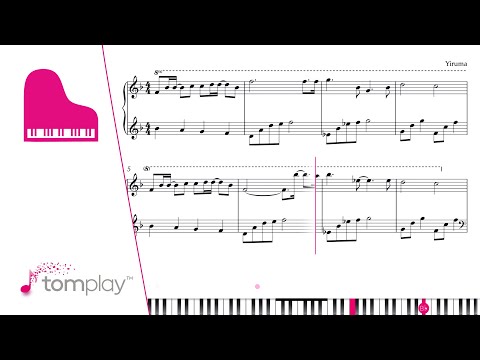