Share
Written By
Norbert Pfammatter
About the author
Born in Agarn in the Swiss canton of Haut-Valais, Norbert Pfammater learned music in his village’s music society. As an adult, he began studying the trumpet in a professional class with Gabriele Cassone at the Lausanne Conservatoire. He obtained his teaching diploma in 2004. From 2005, he studied conducting with Jean-Claude Kolly at the School of Music in Fribourg. He obtained his Master’s degree in musical performance and the conducting of wind ensembles in June 2010. He has been the leader of the Crissier Brass Band since 2010. He is also the Education Director at the Music School in Crissier and works as a trumpet teacher in the Lausanne Conservatoire where he is Dean of the brass, percussion and accordion classes. He is a co-founder and member of the management board of the Junior Slow Melody Contest. He currently plays the soprano cornet with the Valaisan Brass Ensemble. Norbert is also active as an arranger and composer for Brass Bands and other music groups.
Date published
16/06/2021
Show/hide details

Are you learning the trumpet? This article is for you! We have prepared a selection of 10 pretty little duets at beginner level for two trumpets, which you can play now in the Tomplay app. You can practise them during lessons with your teacher and then practise on your own at home with the audio recording of the second trumpet part, just as if you were with your teacher! You will also have the possibility of slowing down the speed of the music, for example, or to record it and listen back to your own playing. If you want to explore the sheet music of these ten short duets straight away, click here. All the sheet music has been carefully arranged by Norbert Pfammatter, a trumpet teacher at the Lausanne Conservatoire and Education Director at the Crissier Music School.

The waltz is a style of music in 3:4 time which makes us want to dance. We’re going to learn the various articulations of this very well-known dance, which is greatly enjoyed in the city of Vienna in Austria, in order to give it even more colour. You’ll see: it will make the piece even brighter!

Do you know what a canon is? It’s a piece in which several voices play or sing a copy of the melody, but with some delay. It’s the strictest form of polyphonic imitation.  "Frère Jacques" is without doubt the most well-known canon. 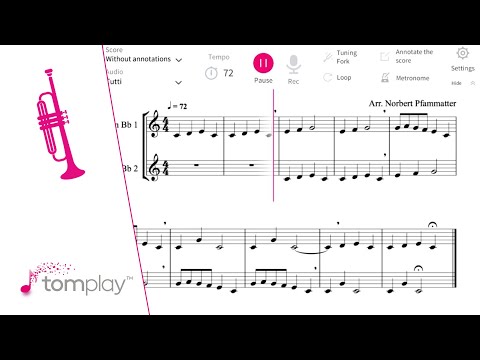 Imagine a magic mirror. When you make a movement in front of this mirror, your image in the mirror won’t change straight away, but a little later on! The principle in this duet is that the two trumpet voices are off-set. So, you’re going to learn to play one melody which looks at itself in the magic mirror and sees its reflection, but not exactly at the same time! 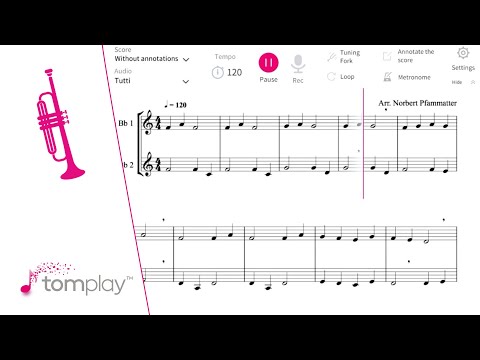 In music, there is a special difference between major and minor keys: major sounds happy and minor sounds sad. You can find out for yourself which place in the piece sounds major or minor. 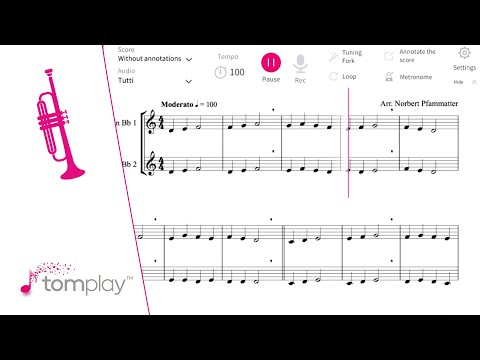 Imagine a staircase. We can go up and down these stairs several times. The steps on the stairs are quite simply the musical notes which sound at each forward or backward step. 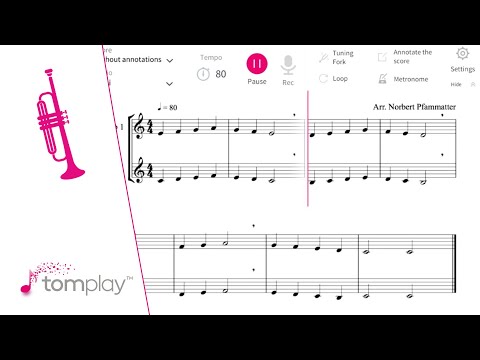 Here’s a classical Christmas song which you can already play after only several months of learning your instrument. You’ll see: Father Christmas will be really happy! 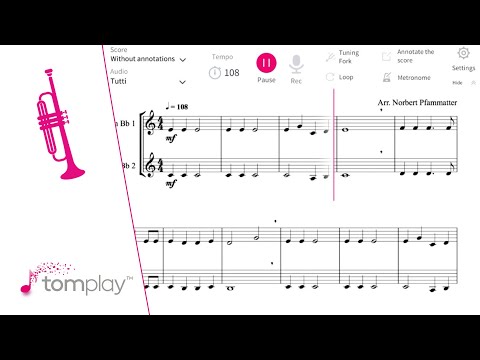 A fourth in music is an interval of four degrees between notes, for example do - fa. In this duet, we’re going to explore the colours of this interval. 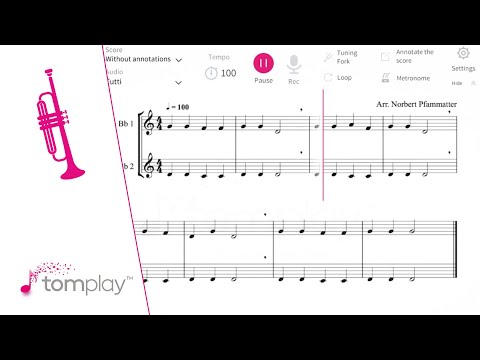 Imagine two kangaroos having a race. Thanks to the melody, liaisons and articulations, this duet gives a perfect picture of this race between these two Australian animals. 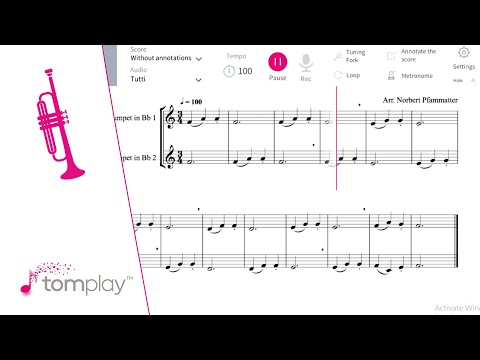 A third in music is an interval of three degrees between notes, for example do - mi. In this duet, we’re going to explore the colours of this interval. 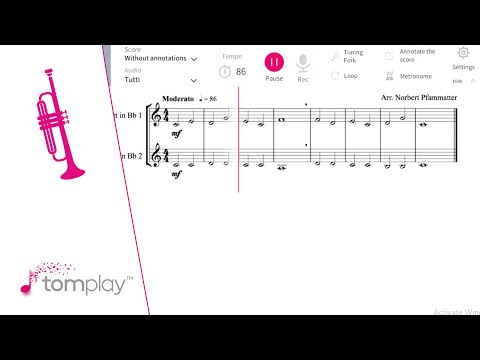 Everybody takes a turn! As the title says, we’re going to swap over the voices half-way! 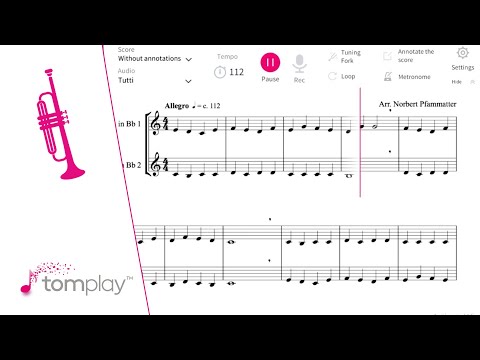 Play this piece and many others with Tomplay!

There you are! Would you like to play all these pieces? You’ll find them in the Tomplay catalogue by clicking here!

If you’d like to explore some other classical pieces and also some Pop and Jazz pieces or film scores adapted for beginner trumpeters, you can explore all our catalogue for the trumpet here.

All our sheet music for the trumpet contains high-quality play-along recordings to accompany you. You’ll also find many features which will help you learn to play the trumpet and to make progress!