Share
Written By
Marie Elizalde
About the author
Born in the Basque Country from a family of accordionists, Marie Elizalde learned to play the alto saxophone from the age of 14. After learning music theory and classic sax, she has played for years in several "bandas" (festive marching bands) touring everywhere in the South West of France. Retired for the cause of "there is no marching band in the country I live now", she remained a musician at heart ever since, developing a passion for mean playlists, nonstop singing, and constant fear of out-of-tune sounds. Passionate and generous, she loves to share her love for music with the Tomplay community, using wit and humor.
Date published
3 days ago
Show/hide details

In this article, we’re sharing a selection of the most beautiful Christmas trumpet sheet music to play with Tomplay, arranged with different levels of difficulty. Display the magic of Christmas and your trumpetist talents to everybody around you! Do you want more? We have an entire selection of Christmas songs that you can find in our trumpet catalogue:

In 1970, José Feliciano, a Puerto Rican singer and songwriter was in his house in New York, feeling homesick and missing Christmas from his native country. This inspired him to write Feliz Navidad. The song contained only nineteen words: six in Spanish and thirteen in English. The choice was deliberated as Feliciano chose to write bilingual lyrics in order to deliver a positive message and unite people around the holidays.

The piece instantly became a major international hit, turning it into a “must” for the Christmas holidays. It got covered a couple of times, including in 2011, by Michael Bublé who sang in duet with Mexican singer Thalía. But also by Feliciano himself who released a ska version of it in 2017, in collaboration with Jools Holland.

Add Feliz Navidad to your collection of Christmas trumpet music sheets and bring positivity and joy to your holidays with Tomplay!

Let it snow was composed in 1945 by Sammy Cahn and Jule Styne. The month of July of this year was particularly hot in California and the composing pair was wishing for a bit of a colder situation. Therefore, funny enough, the song was not initially linked to Christmas or the Holidays celebration. It didn’t prevent radio stations from playing it during the season and countless artists to cover the song on Christmas compilations.

If the original version was sung by Vaughn Monroe, you probably have in mind Frank Sinatra’s version recorded in 1950 or Dean Martin’s cover from 1959. More upbeat than the original, both versions have been used in several movies and commercials. Even though the original version is included in the last scene and the credits of Die Hard- one point for Monroe!

Bring the freshness of the winter season with Let It Snow, your trumpet and Tomplay! Play this Christmas trumpet song now, in a version arranged for an intermediate to advanced level! 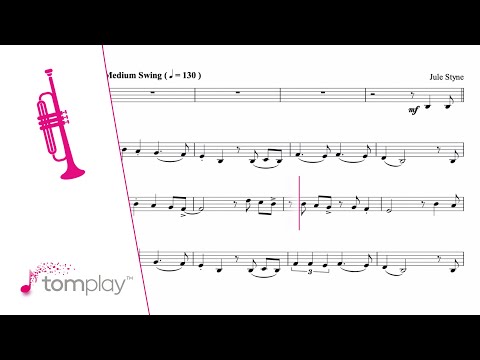 3. Have Yourself a Merry Little Christmas

Have Yourself A Merry Little Christmas was written by Hugh Martin and Ralph Blaine for the movie Meet Me in Saint Louis featuring Judy Garland and released in 1944. During their career, the pair have written and composed dozens of other pieces for MGM and Broadway musicals.

Martin had initially written a melody that he liked but, after playing it for 2-3 days in a row, decided it was not going to work and trashed it. Luckily, Blaine had overheard the melody and convinced Martin that it was too good to get rid of it. After a few lyric revisions, the song became one of the most popular tunes from the American movie industry. Frank Sinatra, John Legend and the Carpenters are a few of the ones who have later covered the song.

Discover Have Yourself A Merry Little Christmas arranged for trumpet, at an intermediate level, and take advantage of the many playing features offered by Tomplay. 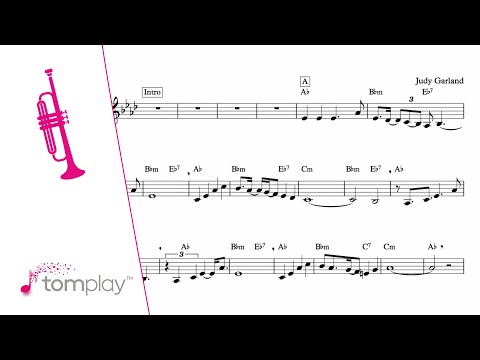 Originally titled “Carol of the drum”, this song was written in 1941 by the American music composer Katherine Kennicott Davis. Rumour has it that it was based on a Czech carol song, however, this was never proved. The song tells the story of a poor boy who was invited to go in front of the infant Jesus: having no present to bring to the baby, he decided to play his drum the best he could in front of him.

The song was brought to a larger audience when the Trapp Family Singers, an Austrian choir, recorded it for the first time in 1951. Over the following decades, the song was recorded by artists from very different backgrounds, from Johnny Cash to Boney M and Joan Baez. 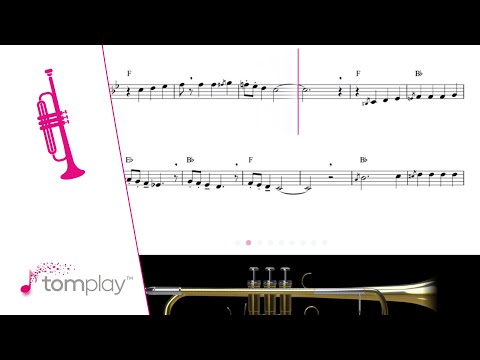 On the 23rd of December 1818, in the Austrian Alps, a community was supposed to be playing the birth of Christ in the local church of Saint Nicolas. Unfortunately, they discovered that they wouldn't be able to play the organ that night, as it was damaged by possible flooding and it couldn’t be repaired on time for the evening.

The father in charge of the congregation, Joseph Mohr, thought he could use a poem he had written several years earlier, called “Stille Nacht” (“Silent Night”). He charged Franz Xaver Gruber, an organist, to write a melody to accompany his piece on the guitar. Only a few hours later, the carol was played for the first time during the Christmas Eve service. The song became so popular ever since, that it even got declared “intangible cultural heritage” by UNESCO in 2011! 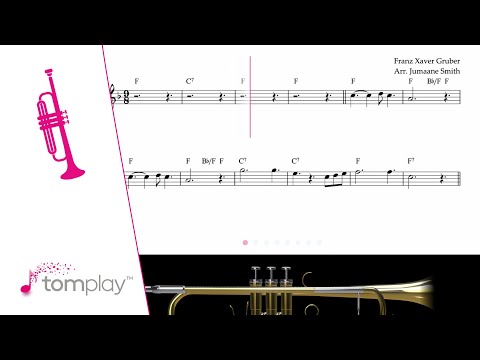 The song was published for the first time in Boston in 1857 under the title “One Horse Open Sleigh”. It was composed by James Pierpont for reasons unclear, some say it to be a Sunday school choir, some say to be a drinking song...Either way, it got quickly associated with Christmas and the holiday seasons-even though the song mentions none of that.

It is one of the most well-known Christmas songs in the world and got adapted in French and German about 50 years later, expanding the popularity of the song to non-English speaking countries. It even became the first song broadcasted from space after 2 American astronauts smuggled a harmonica and sleigh bells to play the song as a prank for the control mission.

Discover Tomplay music sheet of Jingle Bells for trumpet, with piano accompaniment, arranged for an easy/intermediate level. Struggling to keep up? Remember, with Tomplay, you can reduce the tempo of your music sheet and practice until it becomes easy for you! 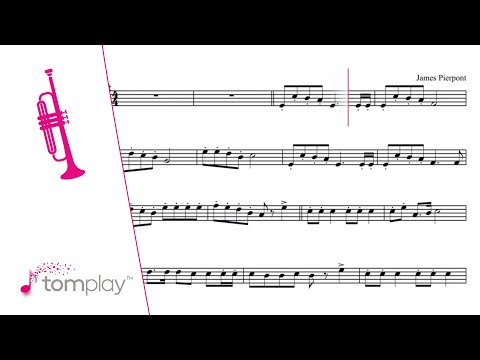 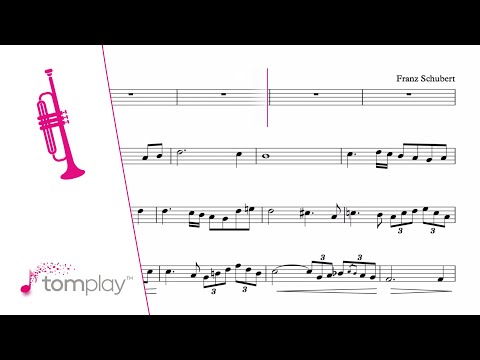 The story begins in 1843 when a French man named Placide Cappeau wrote a poem. In 1847, at the request of the local church, the piece was turned into a song with help of the composer Adolphe Adam. It was known as “Cantique de Noël” at that time. The piece premiered in 1847 in Roquemaure by opera singer Emily Laurey.

In France, it was (and still is) traditionally played at the beginning of midnight masses. The lyrics were later translated into English by John Sullivan Dwight, giving it the title we all know now. After that, it quickly became popular in the United States, then in the rest of the English speaking countries. Once again, its popularity got extended by multiple covers, including some by Celine Dion and Mariah Carey. 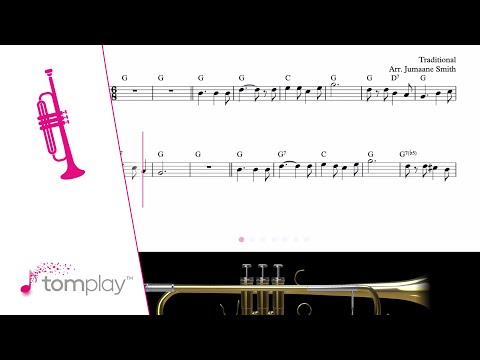 9. We Wish You a Merry Christmas

The origins of We Wish You a Merry Christmas are not certain, but we know it was composed in the 16th century in the South West of England. It was later popularised by the composer Arthur Warrell who arranged the melody and the lyrics for the University of Bristol choir he was part of. They sang the song in its latest version for the first time, during a concert in December 1935.

After that, the song became really popular in the entire UK, then, later on, in the US. It is now part of the Christmas landscape, so you will probably find this song in any music compilation or movie related to Christmas. Be prepared to hear it a lot over the next few weeks!

Get in the Christmas spirit with Tomplay and We Wish You a Merry Christmas arranged with an easy/intermediate level for trumpet! 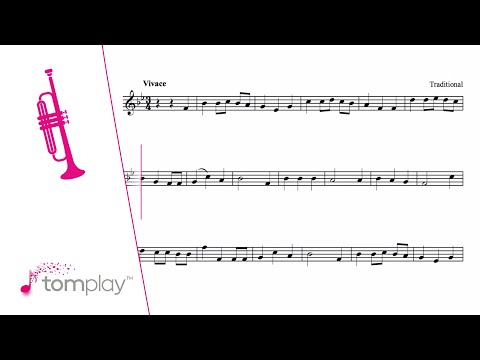 The song was first published in England in 1780, without music, and probably in French. Nothing is sure though as the meaning and the exact origins of the song are still open for debate.  It seems to have been a children’s memory game, where every player/singer who would get the lyrics wrong will need to pay a penalty, in the form of a kiss or a treat.

The text has been modified several times, in addition to local tweaks added depending on the country the song was sung from. In its actual form, it is still a “cumulative song” where every singer needs to repeat all the previous verses plus their own. Starting from “a partridge in a pear tree” to “twelve drummers drumming”. Be prepared for a lot of confusion and laughs!

Entertain your friends and challenge their memory with The Twelve Days of Christmas trumpet song, arranged by Tomplay at an easy/intermediate level! 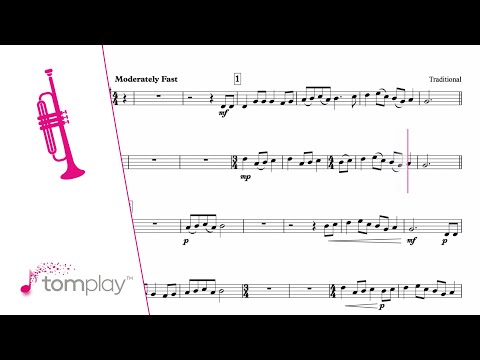 We hope you liked our selection! If you are looking for more Christmas trumpet sheet music, please check our entire catalogue below: