Share
Written By
Gwenn Daniel
About the author
Passionate about music from her childhood, Gwenn Daniel studied the piano at the conservatoire while also maintaining a steady stream of musical activities beyond this. This young piano teacher's constant lively curiosity encourages us to discover music from all eras and in all styles. She is now putting her literary and musical talents to the service of Tomplay and enjoys helping you discover the history of the great classics and guiding you through the vast choice of scores offered by Tomplay.
Date published
20/07/2021
Show/hide details

To mark the birthday of Wolfgang Amadeus Mozart, we are inviting you to explore five of his most beautiful pieces for the piano, either in their original form or arranged by Tomplay for pianists of all levels. We have included the link to the score for each piece.

▶️ Play the 1st Allegro movement from the Concerto No. 9 on the piano with orchestra

▶️️ Play the 2nd Andantino movement from the Concerto No. 9 on the piano with orchestra

▶️ Play the 3rd Rondeau movement. Presto from Concerto No. 9 on the piano with orchestra

Although Mozart was only 21 years old when he wrote his Piano Concerto No. 9 in E-flat major, the work’s nickname “Jeunhomme” does not refer to his youth, but to a French pianist passing through Salzburg, whose surname it was.

The pianist opens the first movement of this Concerto, a practice that was still unusual at the time. As the British musicologist and writer Girdlestone noted, this break with convention does not stop with this solo entry but continues in the style of the dialogue between the piano and the orchestra in the rest of the movement.

The second movement is written in a minor key, particularly which is only found in five Mozart Piano Concertos.

As for the third movement, it opens with a Rondo on the piano and is interrupted quite unexpectedly by a slow Minuet. The work finishes in its original tempo.

Use the many Tomplay functions to help you learn this Concerto No. 9 in E-flat major, K. 271 by Mozart in the best possible way: adjust the tempo of the metronome in order to place your piano part into the professional orchestral accompaniment, annotate your score and work on tricky passages in a loop. 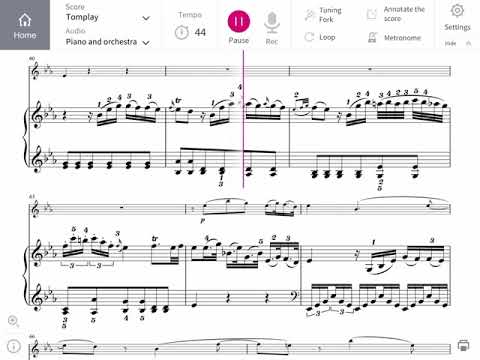 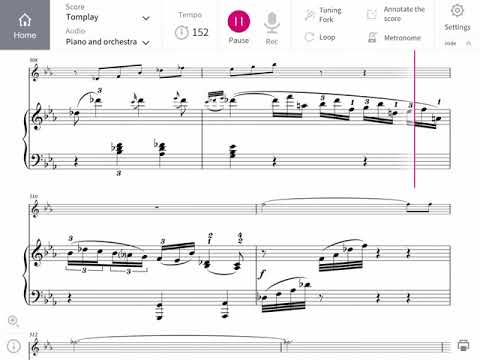 What an enigmatic, captivating, and boundless opera The Magic Flute is! Mozart composed it several weeks before his death and through this lyrical testament, he has conveyed to us a universal work par excellence, a source of unending wonder, just like one of Proust’s madeleines for many musicians who played its mischievous airs during their childhood.

The Magic Flute is accessible for young children and adults alike and is often considered to be the most poetic and brightest work ever written by Mozart.

However, some doubt still remains regarding its real meaning: is it a story for children, an esoteric and spiritual story, linked to the symbols of freemasonry, a society which Mozart had joined some years before or is it, more simply, a brilliant marriage of ideas forming a divine fable born from the mind of Mozart? Everyone has their own interpretation.

Play the famous Papageno’s song (der Vogelfänger bin ich ja) on solo piano with Tomplay: by clicking on Play, the score scrolls automatically on your screen so that you never have to turn the pages. 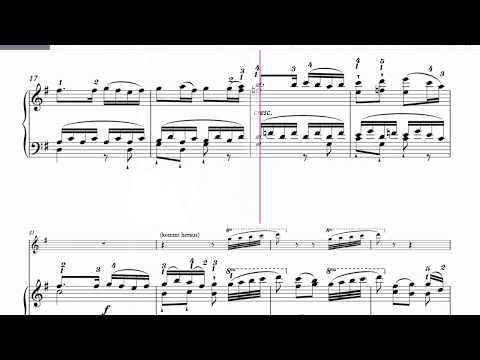 ▶️️️ Play the 1st Allegro movement from Sonata No. 16 on solo piano

▶️️️ Play the 2nd Andante movement from Sonata No. 16 on solo piano

▶️️️ Play the 3rd Rondeau movement from Sonata No. 16 on solo piano

The Piano Sonata No. 16 in C major is one of the most well-known of Mozart’s piano Sonatas. It is also one of the easiest Sonatas to play, which has earned it the nickname of the “Easy Sonata” or “Sonata semplice”. Did Mozart write it for a pupil? The mystery behind this Sonata remains complete.

Although it is very well known, the piece was only published posthumously and the first printing of it was made in 1805 by the Arts and Industry Office in Vienna.

Its opening theme in C major is accompanied by an Alberti bass played on the left hand. The music of the second movement modulates towards the dominant key of D major, then comes back to G major, in which the theme is heard again, ending with the third Rondo movement.

In order to work on Mozart's Piano Sonata No. 16 in C major in the best way, annotate your score, work on tricky passages in a loop and listen to the Deutsche Grammophon performance by Maria João Pires, either just for pleasure or for inspiration. 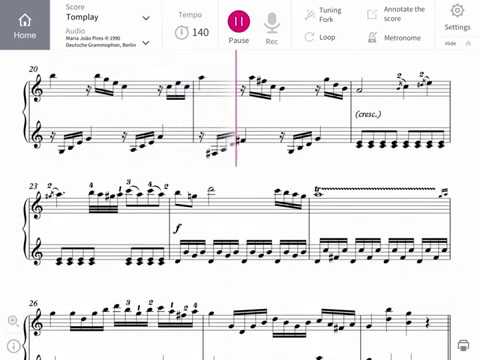 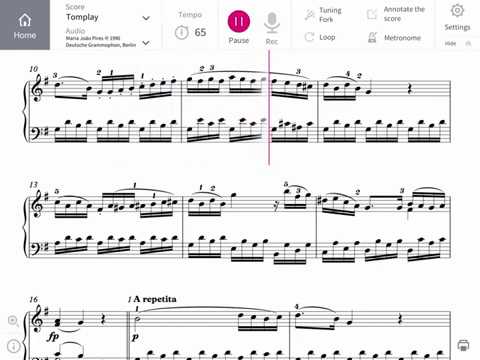 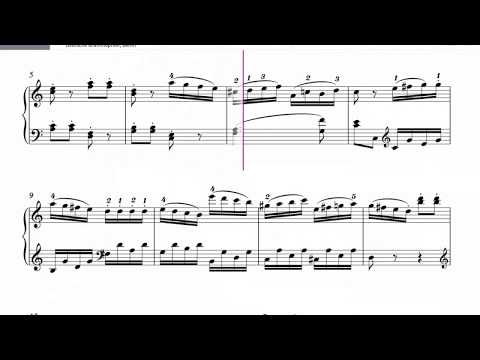 ▶️️ Play the 1st Allegro movement from A Little Night Music for solo piano at a very easy, intermediate, or advanced level.

▶️️️ Play our arrangement of the 1st Allegro movement from A Little Night Music for piano four-hands at an easy or easy-intermediate level.

Whether we are music lovers or enjoy music at a lower level, we are all aware of A Little Night Music, whose exact title is rather: Serenade in G major for two violins, viola, cello, and double bass.

Originally written for a quintet, the score was then re-worked by the largest string orchestras, as it seemed to have been written for these majestic ensembles.

Its title could, at first, evoke a little gentle music, welcoming the dusk, but it’s nothing like that: here, we have an entertaining work, full of life and fervor, just like its creator!

However, it was a tough period for Mozart! He was around thirty years old and had just lost his father Leopold, his mentor and impresario. So, he lost himself in his work and composed this quintet, as well as his opera Don Giovanni.

Play the famous A Little Night Music, K. 525 for four hands with Tomplay: choose to play the Primo or Secondo part and practice alone at home, accompanied by the professional recording of the other part. 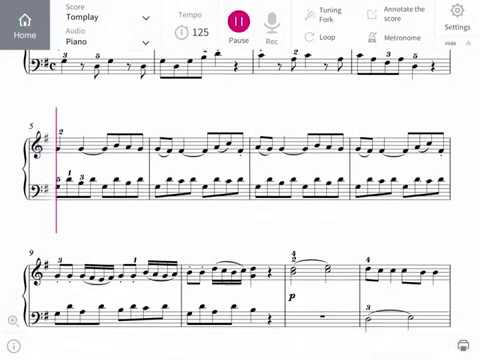 ▶️️️ Play the Lacrimosa from the Requiem in D minor for solo piano at easy or intermediate level.

We couldn’t end this article without mentioning Mozart's legendary Requiem in D minor. While he was working on The Magic Flute, the composer received the order from a stranger to compose a Requiem, under the utmost secrecy.

The sponsor, Count von Walsegg, wanted a Requiem which could be played every year to mark the anniversary of the death of his wife. Some have suggested that he had wanted to pass the work off as his own. Another version made up for the film Amadeus suggests that the real sponsor was Mozart’s greatest enemy, Antonio Salieri.

He accepted the challenge, encouraged by his own wife. Some weeks later, he was ill and bedridden. One evening when he was feeling slightly livelier, several close friends got together with him to sing a part of the still-unfinished Requiem.

That evening, Mozart’s illness worsened and, slightly before one o’clock in the morning of 5th December, he died, aged 35. At the time of his death, only the Introitus of the Requiem had been written in its entirety and the other movements were only sketches. It was his assistant Franz Xaver Süssmayr who completed a large part of the Requiem at the request of Constance, Mozart’s loyal wife.

The Tomplay separate hands function greatly facilitates the placing together of the hands in the Lacrimosa, from the Requiem: you can practice one hand, accompanied by a professional recording of the other hand. 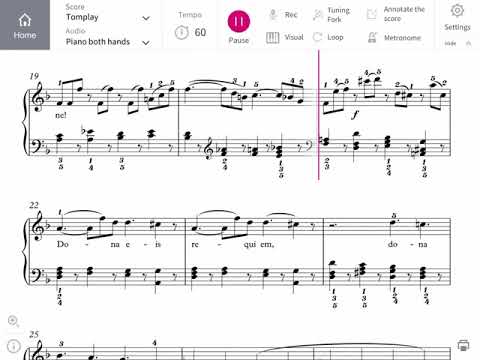