Share
Written By
Gwen Daniel
About the author
Passionate about music from her childhood, Gwenn Daniel studied the piano at the conservatoire while also maintaining a steady stream of musical activities beyond this. This young piano teacher's constant lively curiosity encourages us to discover music from all eras and in all styles. She is now putting her literary and musical talents to the service of Tomplay and enjoys helping you discover the history of the great classics and guiding you through the vast choice of scores offered by Tomplay.
Date published
16/07/2021
Show/hide details

Just a few weeks before the Christmas season! Easily learn to play some traditional Christmas songs for your loved ones. In this article, we're offering you a selection of the most beautiful Christmas pieces to play on the alto, tenor, or soprano saxophone. For each piece, we have included a link to the sheet music, available in several levels: beginner, easy, intermediate, and advanced.

1. All I Want for Christmas is You

▶️ Play "All I Want for Christmas is You" on the alto, tenor, or soprano saxophone

“All I Want for Christmas is You" features at the top of the list of the favorite Anglophone Christmas songs. It was written by Walter Afanasieff and Mariah Carey and recorded by the latter.

Following the success of her 1993 album Music Box, Mariah Carey and her team had the idea of recording a Christmas album. At the time, it wasn’t common practice among musicians; covering or writing Christmas songs only became popular again after this.

This Christmas song is already 25 years old but still sounds fresh. Discover the Tomplay scores of "All I Want for Christmas is You" for alto, tenor, or soprano saxophone, available in several levels of difficulty and with a professional orchestral recording to accompany you.

2. Have Yourself A Merry Little Christmas

Hugh Martin and Ralph Blaine wrote, “Have Yourself A Merry Little Christmas” for the Judy Garland film Meet Me in Saint Louis, released in 1944, as well as dozens of other songs for MGM and Broadway musicals.

The song “started with the melody”, Martin said. “I found a little melody I liked that was a little like a madrigal, but which seemed to me couldn’t work, so I played it for two or three days and then threw it in the trash.”

Fortunately, Blaine heard the melody and convinced Martin that it was too good to throw away.

Discover the Tomplay scores of "Have Yourself A Merry Little Christmas" for alto and tenor saxophone in several levels with an orchestral accompaniment and take advantage of the many features offered by Tomplay! 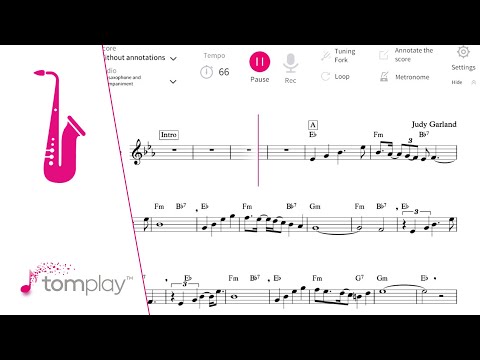 ▶️ Play the Jazz version of "Jingle Bells" on the alto, tenor, or soprano saxophone

James Pierpont, a character described as being an opportunist without a great deal of compassion, composed “Jingle Bells” for Thanksgiving. It was supposed to be a drinking song.

It was published for the first time in Boston in 1857 under the title “One Horse Open Sleigh”. It is one of the most well-known Christmas songs in the world. In particular, it was sung by Elvis Presley, Carl Perkins, Jerry Lee Lewis, and Johnny Cash in 1956 as the Million Dollar Quartet.

Adapted into French by Francis Blanche in 1948 under the title “Vive le vent”, it is very popular in France and has been sung by many singers such as Dalida, Mireille Mathieu, and even, recently, Mika.

Discover the Tomplay scores of the Jazz version of "Jingle Bells" for alto, tenor, or soprano saxophone in several levels and adjust the speed of the accompaniment to suit you in order to be able to match it as well as possible. 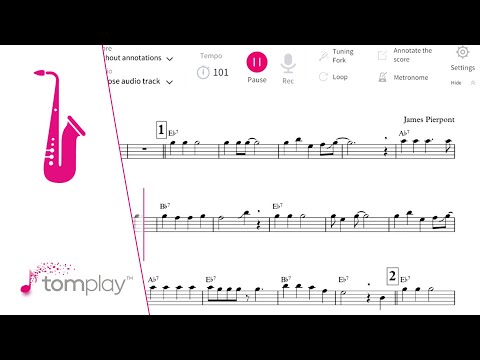 This story takes place in 1818 in the Austrian Alps. On 23rd December in Oberndorf, a village near Salzburg, they were supposed to be re-enacting the birth of Christ in the little church of Saint Nicolas.

Unfortunately, the priest of Saint Nicolas parish church in Oberndorf had to deal with a disaster: the organ had been put out of action by mice (others said by the rust) and it was impossible to get it repaired before the evening service.

Father Joseph Mohr wasn’t a man to give up, though: he ran to fetch a poem he had written several years before, called “Stille Nacht” (“Silent Night”).

He gave his poem to the schoolteacher and organist in the neighboring village, Franz Xaver Gruber, and asked him to write a melody to accompany his work on the guitar.

Some hours later, the carol was played for the first time that evening during the Christmas Eve service in the little church of Saint Nicolas.

Discover the Tomplay scores of "Silent Night, Holy Night" for alto, tenor, or soprano saxophone with an orchestral or piano accompaniment available in several levels of difficulty and take advantage of the "annotation" and "loop" features which make studying the piece easier. 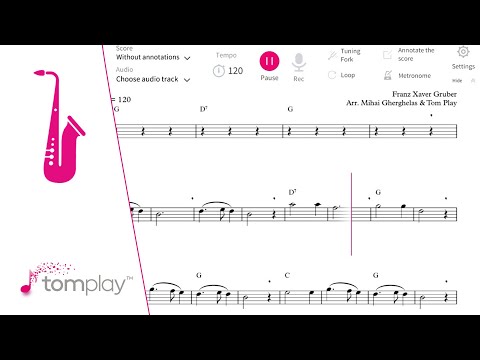 5. Joy to the World - Jazz version

“Joy to the World” is one of the oldest and most popular traditional carols in the United States. In 1719, the British intellectual Isaac Watts published a book of poems, each one based on a psalm. One of them was written following Psalm 98 in the Bible.

In 1839, this text was put to music by Lowell Mason using an old melody said to have been by Handel (probably, as the theme of the chorus seems to correspond with the orchestral overture and accompaniment of the recitative Comfort ye from Messiah and the first four notes could have been inspired by Glory to God and Lift up your heads from the same oratorio.) Nevertheless, Handel did not compose the melody.

Isaac Watts wrote the words “Joy to the World” not as a celebration of the Nativity, but as a hymn glorifying the coming of Christ at the end of time.

Discover the Tomplay scores of "Joy to the World" in its classical version and also its Jazz version, for alto or tenor saxophone in several levels, and take advantage of the professional recording of the Jazz orchestra to accompany you! 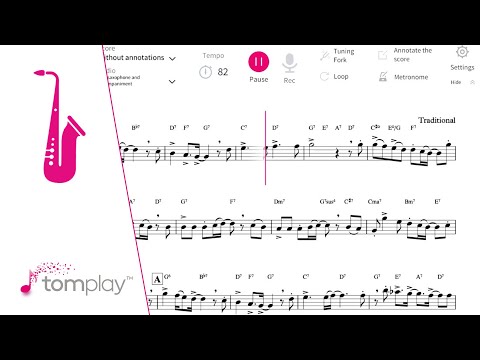 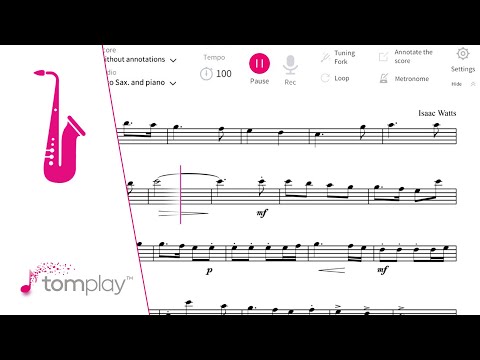 6. We Wish You A Merry Christmas - Jazz version

“We Wish You a Merry Christmas" was composed in the 16th century and originates from the West Country in England, from a time when penniless artists would sing for wealthy listeners.

It was popularised by the composer and conductor Arthur Warrell. He arranged the melody for his own Madrigal Singers at the University of Bristol and played it with them in concert in December 1935.

In the same year, his arrangement was published by the Oxford University Press publishing house under the title “A Merry Christmas” and has been able to cross the ages, being always played and sung.

Discover the Tomplay scores of "We Wish You a Merry Christmas" in its classical and Jazz version for alto or tenor saxophone, with an orchestral accompaniment synchronized with the sheet music. 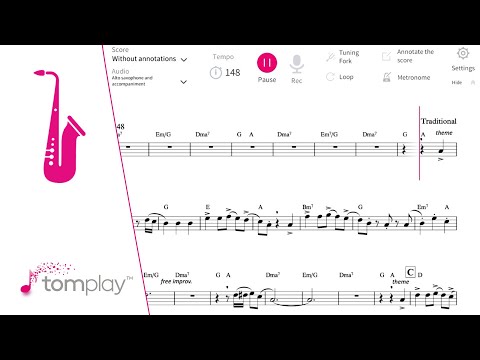 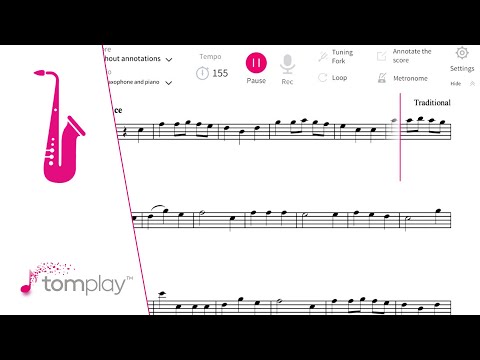 "O Holy Night" is a famous Christmas carol composed in France (“Minuit, Chrétiens”) around 1845 by Adolphe Adam on a text by Placide Cappeau.

Originally written for soprano voice and keyboard, it is often performed by various groups during the first mass of Christmas.

Celebrities such as Mariah Carey and Céline Dion have covered it in their English version.

Discover our arrangements in several levels of "O Holy Night" for alto, tenor, or soprano saxophone, available in several levels of difficulty and with a professional orchestral recording: start the audio track of the orchestra, which will make your sheet music scroll automatically, and play accompanied! 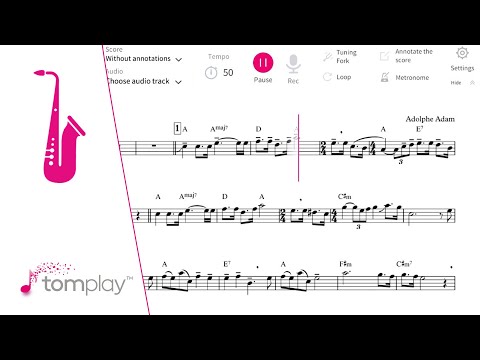 ▶️ Play "Let it Snow!" on the alto and tenor saxophone

To close this article, we're inviting you to play "Let it Snow!" by Jule Styne, a love song considered to be a Christmas song owing to its seasonal lyrics.

In reality, "Let it Snow!" is a song that has no relationship to Christmas. Moreover, it was written in Hollywood in 1945 during the hottest day of the year!

Vaughn Monroe was the first to record this title, which quickly became a popular hit. Many artists followed him, including Frank Sinatra, Ella Fitzgerald, Dolly Parton, Paul Anka and even Michael Bublé.

Explore the Tomplay sheet music of "Let it Snow!" for alto and tenor saxophone, in several levels with an orchestral accompaniment.

Take advantage of the many Tomplay features to practice under the best conditions and why not play one of the pieces in this article for your next Christmas Eve party? 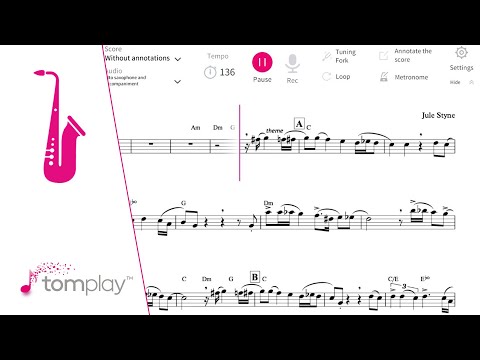