Share
Written By
Marcel Alber
About the author
As a passionate guitarist and former metal singer, Marcel Alber has been fascinated by music of every genre from an early age. Since then he has had a strong network in the music scene in Frankfurt am Main and is constantly looking for talents to inspire him. In addition to music, it is literature that he deals with in depth professionally. In order to give you the best Tomplay experience, he combines both talents and helps you to discover the best scores in our catalog.
Date published
27/05/2021
Show/hide details

Are you learning to play the bass? In this article we present our selection of the best tabs for bass beginners. Thanks to our scores, you can play the easy bass lines with a play along accompaniment by the rest of the band! You can also find these songs in our collection “The greatest rock songs to play on the bass”.

▶️️ Play the “The greatest rock songs to play on the bass”

The perfect instrument for every beginner

There is a wide range of complex techniques to discover on the bass that require years of practice. Once you have mastered your playing, the instrument can effortlessly add unique sounds to any song in any genre. But on top of that, the bass has another very special quality to it: Even as a beginner you can run your fingers over the fret - and quickly pluck great sounds from the strings!

Despite the complexity that can be inherent in it, the bass is a particularly beginner-friendly instrument. The thick strings make it easy for even inexperienced fingers to hit the right note and play strong melodies. At the same time, even easy bass lines can create an iconic sound that will go down in music history forever.

Thus, especially as a bass beginner, you’ll already have a lot of fun exploring the potential of your instrument in the first steps. Which doesn't mean that you have to deal with songs whose sound shouldn't have any power. Such important pieces as Stairway to Heaven or The Final Countdown offer you the chance to really rock out - even as a beginner!

If you're still at the beginning of your musical journey, you've come to the right place: We have put together a selection of the best pop and rock songs for bass beginners that you can now learn bass with. Our interactive features have made these bass tabs easy for you to master. With these pieces you pave the way for your talent to all the possibilities that the instrument still has in store for you!

▶️️ Play the bass tabs for Start Me Up

A song that is not just fun to play - it also puts you in a good mood! As the musical child of two legends like Mick Jagger and Keith Richards, the unique musical experience of Start Me Up is pre-programmed. The Rolling Stones had a range of hits that have shaped the rock landscape forever - Start Me Up is undoubtedly one of them.

What originally began as a reggae rock song called Never Stop has now become one of the most exemplary rock anthems of the genre's golden era. The simple melody has held up over the decades and still motivates its listeners to sing along loudly.

The riff of the guitar is legendary and has contributed to the immense success of Start Me Up - the easy bass line, however, gives the song the necessary emphasis. Paired with Jagger's atmospheric voice, the recipe for a good load of rock'n'roll is guaranteed!

Play our easy bass tabs for Start Me Up, including a play-along recording of the rest of the band!

▶️️ Play the bass tabs for Stairway to Heaven

Led Zeppelin are veterans of rock music. Their immense influence has opened doors for the genre without which it would have never experienced the popularity it has today. Stairway To Heaven is not only one of the most important songs in the band’s history - but also in rock history!

The ballad starts with a melancholy intro on the guitar that every guitarist should have played at least once in his career. It is one of the most important works ever written for the instrument. Despite the relatively long playtime of eight minutes, time flies by thanks to its soulful composition.

Led Zeppelin's guitarist Jimmy Page has made a huge mark on the rock genre. But Stairway To Heaven also needs the bass to achieve the full power of its sound. With an easy bass line you can contribute to one of the most important works of all time on your instrument.

Thanks to Tomplay, you can now play the easy bass tabs from Stairway To Heaven for beginners with the rest of the band! 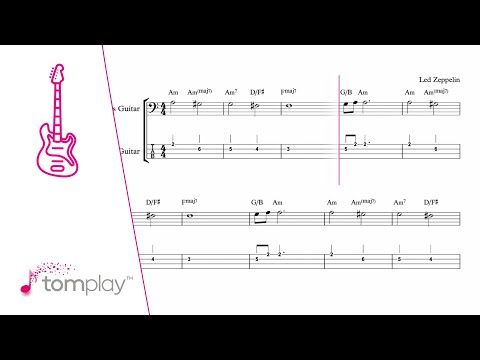 ▶️️ Play the bass tabs for The Final Countdown

Energetic and loud: The Final Countdown from Europe brings power to your instrument! Its enormous sound rightly made it the most successful hit of the Swedish rock band Europe in 1986. And still, The Final Countdown is as present today in the world of rock music as it was on its initial release.

The song lives up to its name by using sophisticated compositions to create an exciting atmosphere that every listener can be carried away by. The lyrics, which are sung soulfully by frontman Joey Tempest, add a full load to the energetic sound. So let yourself be infected by the energy!

With The Final Countdown you will learn a rapid pace on the bass, with which you will be able to master every rock song in the future. Be part of the powerful sound of the unique band Europe!

Play the bass tabs from The Final Countdown for beginners with play along accompaniment from the rest of the band and experience the full power of Europe! 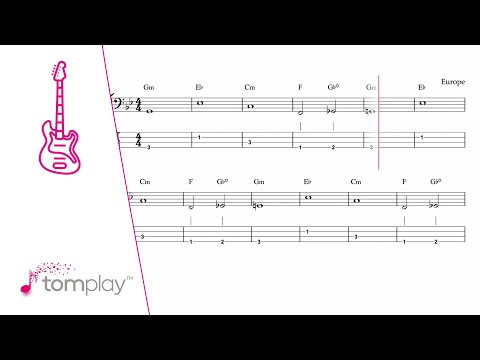 Is there a guitarist whose side you'd rather play bass by than Eric Clapton? The rock and blues guitarist has a large repertoire of hits that rightly makes him one of the most celebrated musicians of all time. Whether Tears In Heaven or Layla - playing Eric Clapton's music is a unique experience.

The native Englishman has always managed to find exactly the right notes on his guitar in order to equip his profound lyrics with the perfect sound. His life, which consists of many hurdles and setbacks, clearly colors the sound of his music. Thus, all of his compositions are filled with powerful emotions.

Layla is no exception. It is a highly rhythmic piece that will help you develop a well-rounded sense of rhythm. Let yourself be carried away by Eric Clapton's composition and take the chance to play alongside one of the greatest guitarists of our time! 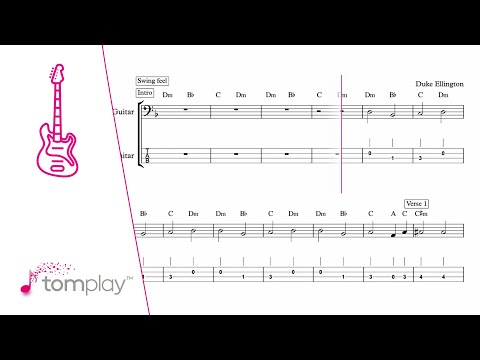 Would you like a little more action? Elevation is one of the many Nr. 1 hits that U2 has launched in their long career. At the same time, it is one of the most action-packed songs by the Irish rock band. No wonder it was featured on the 2001 action movie soundtrack, Lara Croft: Tomb Raider.

The song exists in two variants: an original version with a more electronic touch and the hard rock version with amplified guitars and drums, which can be found on the soundtrack. Both pieces, however, are charged with such power that it is worthwhile for every instrumentalist to try the song.

As a bass player, Elevation is the perfect chance to conjure up a successful mix of energy, speed and swing in your playing with simple movements. The band also managed to win the award for the best rock performance at the 44th Grammy Awards. Now it's your turn!

Play the easy bass tabs for Elevation with the rest of the band! 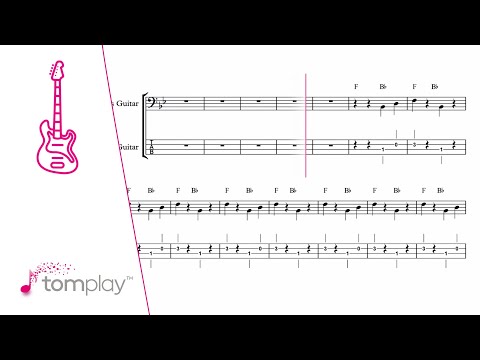 George Michael's soulful song shaped the 80s significantly - like many of his hits. The iconic saxophone is the very clear star of Careless Whisper and makes the songs unmistakably recognizable, played by the English jazz saxophonist Steve Gregory.

But the bass is also crucial for the romantic sounds for which the song is celebrated by fans around the world to this day. Each instrument does its part to provide the right sound for the beguiling lyric. With Careless Whisper you are part of a perfectly coordinated musical whole.

Hardly anyone has managed to create such a dense atmosphere in his songs as George Michael. Even today, the song is one of the artist's most successful works - which is extremely remarkable with such an extensive number of hits. So the song shouldn’t be missing in your repertoire.

Play the beginner bass tabs for Careless Whisper now with Tomplay in a beginner's level with the rest of the band! 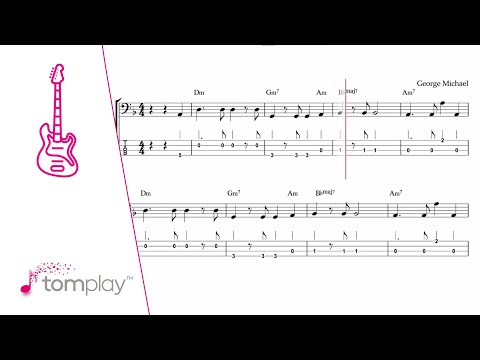 The 10 best rock songs to play on bass