Share
Written By
Clara Avrillier
About the author
Clara Avrillier was introduced to music from a young age, firstly singing in choirs, then playing percussion in several orchestras before going on to study piano and classical music in Scotland. Following a master’s degree in linguistics, she now brings together her musical and language skills to accompany you on your journey with TomPlay.
Date published
24/05/2021
Show/hide details

Erik Satie was a French composer born in Normandy in 1866. At the age of 12, he moved to Paris to live with his father, who had remarried a piano professor. She taught Erik the basics of the instrument and enrolled him in the National Conservatory. It may be hard to believe, but during this first experience at a music school, Satie was deemed the “laziest student” by his teacher! Unfortunately, this reputation followed him around for years, although that didn’t stop him from graduating top of his class later on in life!

Aside from his musical skills, Satie was known for his eccentric and somewhat unique personality, from having a peculiar diet of white food only to a large collection of umbrellas. His quirky nature comes across in his music in a weird and wonderful way, which you can see in the following collection:

The Gnossiennes are a collection of 6 pieces for the piano. The word itself, gnossienne, was invented by Satie as a way to describe a new ‘type’ of music, as it was different from all the other styles of the period. The end of the 19th century was the tail-end of the romantic era, a musical era dominated by passion, energy, expression and drama. The Gnossiennes were a complete departure from this style.

The first Three Gnossiennes were published in 1893, whereas the last three were not published until 1968, long after Satie’s death.

All of the Gnossiennes can be described as short, atmospheric pieces. They certainly leave much open to interpretation, which can be both interesting and tricky for pianists.

Play the Sheet Music of Satie’s Gnossiennes on Tomplay.

This first piece is marked lent and is essentially a set of repeated chords with a simple melody layered over it. Don’t be fooled, however, by its deceptively simple appearance. The simplicity of Satie’s music is what makes it so wonderful - and challenging. The other challenge in this piece is the pedalling. Finding the balance between using the pedal effectively while not creating an overbearing sound is something which takes practice.

Avec étonnement (with astonishment) is the marking of this second Gnossienne. This can be interpreted in many ways but if you listen to the piano recording on Tomplay, you can understand Satie’s logic: following the sets of triplets, the chord progression goes in an unexpected direction, causing the listener to be surprised.

Listen to the recording of Gnossienne No. 2 on Tomplay. 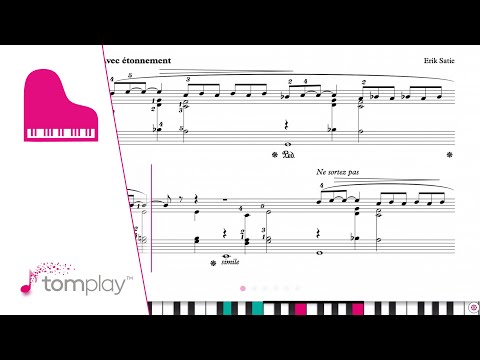 Similar to the first piece, the third Gnossienne is marked lent and reflects Satie’s eccentric personality, as it is littered with some interesting markings. Conseillez vous soigneusement (literally ‘advise yourself carefully’), de manière à obtenir un creux (literally ‘so as to obtain a hole’) and many other wildly unconventional markings can be found in this piece. They certainly make for an interesting debate as to how to express them through the piano.

Perhaps the fact that this piece follows a more structured pattern, even though it’s in free time, helps balance out the strange markings. In any case, this composition is beautiful and deserves some love and attention.

Take a look at the sheet music for Gnossienne No. 3 on the Tomplay app. 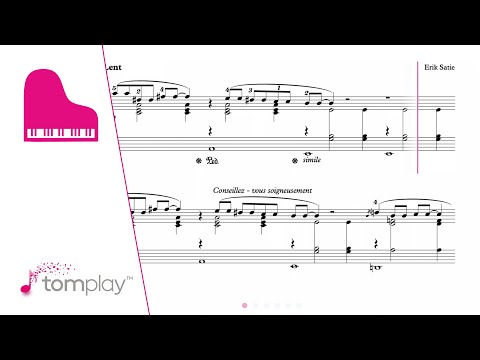 You will undoubtedly hear and see the difference between the Gnossienne No. 4 and the first three pieces. Gone are the repeated chords and eerie melody. In its place, we have a beautiful and flowing accompaniment in the left hand while the ethereal right hand melody enters in intervals. 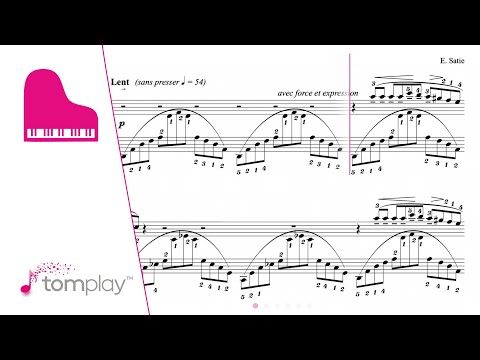 Last but not least is Gnossienne No. 5 and it has a time signature and bar lines! It’s important to take your time with this piece, as the rhythm alone will have your head spinning. It differs from the other Gnossiennes in that it’s slightly quicker, modéré, more structured and more upbeat.

Play Gnossienne No. 5 on the TomPlay app and change the tempo if you need to, in order to get to grips with the rhythm. 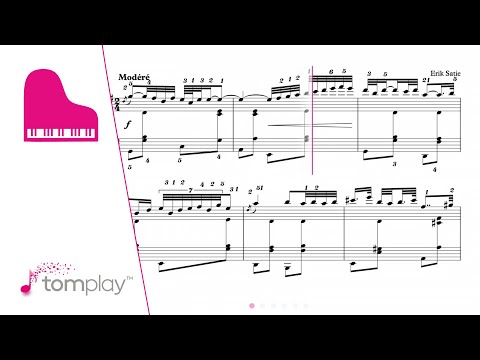 For those of you at the beginning of your piano journey, it might be interesting to note that Satie wrote several beginner piano pieces. The Menu propos enfantins, published in 1914, was written for children but it’s suitable for all beginner pianists.

Number 2, Ce que dit la petite princesse des tulipes (What the Little Princess Tulip Says), is a clever piece devised to make full use of all five fingers in both hands. This is especially helpful when learning the piano, as many of us have a tendency to eagerly practice our dominant hand while spending less time on the hand which actually needs more practice!

Once again, Satie’s eccentric personality comes to the fore with the addition of some amusing text.

Take a look at the TomPlay sheet music for Menus propos enfantins. 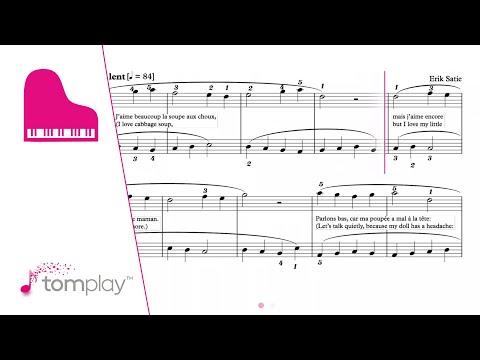 The Gymnopédies for solo piano are probably the most well-known Satie pieces. Three short works, they were written in 1888 but only published at the beginning of the 20th century. They are all similar in ambience and style and can be described as very serene, still pieces.

Satie’s lifelong friend, Claude Debussy, wrote orchestral arrangements of the first and third Gymnopédie, which certainly helped raise awareness of both the pieces and Satie himself.

The three pieces have a common theme: a ¾ time signature and lent marking, although each piece is a variation of lent and another marking. Let’s go into more detail.

This first Gymnopédie is by far the most well-known and it has appeared in countless films, series and documentaries, including The Simpsons!

Lent et douloureux (slowly and painfully) may not sound particularly relaxing, but the lull of the left hand slowly moving between two simple notes has a very meditative effect. Even the switch to a minor passage does not change the entrancing ambience of this beautiful piece of music. 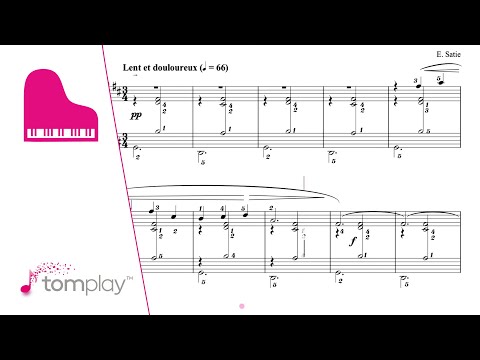 The second Gymnopédie is marked as lent et triste (slowly and sadly), almost contradictory as the piece is in C major. The piece starts with the same two notes as the first Gymnopédie, lulling us into a moment of stillness and serenity before navigating us through a range of diverse chord progressions. 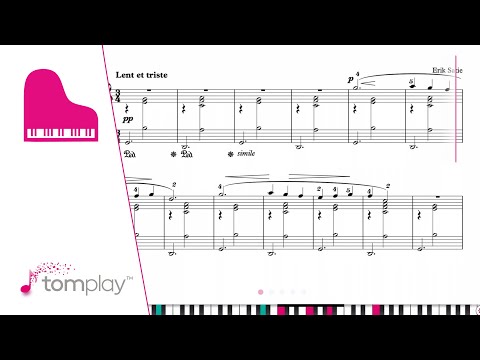 The final Gymnopédie is lent et grave (slowly and gravely) and offers a calming way to finish off this wonderful set of compositions. The challenge of this piece is the slow tempo, as it can be tempting to speed it up. Focus on gently accentuating the right hand melody, as well as the expression of the piece. 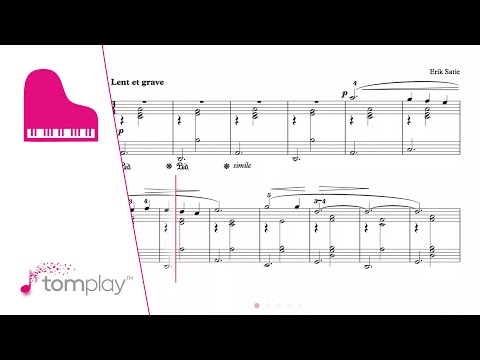 There are many elements in this piece to get to grips with. Firstly, part of the melody is played in octaves which takes time to master. Secondly, as with most waltzes, learning how to balance the second and third beats of each bar so that they don’t dominate or overshadow the melody is tricky. However, it’s worth taking the time to learn this beautiful piece and you will no doubt progress in your performance.